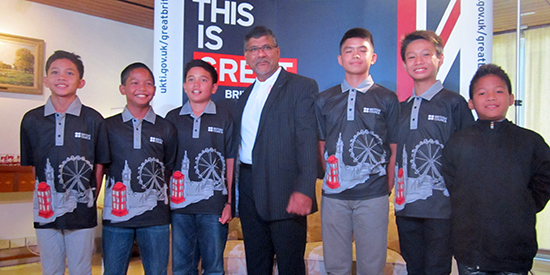 British Ambassador to the Philippines Asif Anwar Ahmad with some of the members of the Young Azkals of the Philippine Under-11 National Football Team.

British ambassador to the Philippines Asif Anwar Ahmad believes Filipinos can excel in the sport of football.

Ahmad said unlike other sports, just about anyone—regardless of height, weight, or strength—has a chance to win in a football match.

“In many other games, your height, your weight or your physical body mass or strength will determine whether you will succeed or not.

“In football, if you’re very small and you’re close to the ground, you have a very different way of playing which is very difficult for a big guy to play against. You’re agile and very grounded.

“If you’re quite tall, then you’re also very useful. So it’s a game that requires people of different physicalities,” Ahmad said in an interview with PEP.ph (Philippine Entertainment Portal) and other members of the entertainment media at his Forbes Park residence, last Thursday, August 7.

He believes Filipinos have all the potential to be a top-level team in world championship football, if given the right support and attention.

Hence, the British Council’s participation in the production of Pangarap Kong World Cup (Football Dreams), a documentary feature about the selection and training of the members of the Philippine Under-11 National Football Team or the Young Azkals.

Together with Pru Life UK, the British Council worked with the Philippine Football Federation and ABS-CBN to come up with the documentary following young Philippine team hopefuls in their quest to be part of the future team who will represent the Philippines at the FIFA World Cup.

The British Council’s role in the production of the documentary is more than the Bengali-British diplomat’s extension of his passion for the wildly popular sport. Football, historically, is a British invention and a sport where Great Britain has very big role in terms of rules and promotion.

Hosted by Atom Araullo and with appearances by Phil and James Younghusband, Chieffy Caligdong, Rob Grier, and other local football enthusiasts, Pangarap Kong World Cup (Football Dreams) will air its first part tonight, August 10 on the Kapamilya network’s Sunday’s Best program at 10 pm. The second part of the documentary will telecast on October 26.

FOLLOWING THE YOUNG AZKALS. The documentary will center on the formation of the Young Azkals and its training in the United Kingdom.

About five subjects will be followed more closely—these are the kids who are most likely to make it to the team and beyond.

The major sections of the documentary are: 1) choosing the 22 players and their preparation for the U.K. trip; 2) training the kids in Loughborough University; and 3) returning to the Philippines.

There will be observational footage of the training and interviews with the players (particularly the five chose subjects, and their coaches and trainers). The training will be highlighted by matches of the team against U.K. teams of the same age bracket. The national players will also have the chance to interact with their host players during their class and leisure hours.

At the end of the documentary, the Filipino kids return with their dreams of qualifying for the 2019 World Cup and being with the Under-17 National Team.