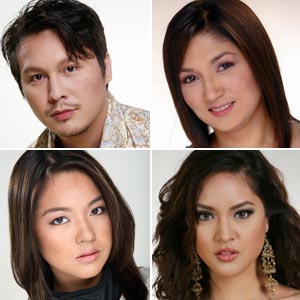 (Clockwise, from top left) Baron Geisler, Yayo Aguila, Riza Santos, and Gaby dela Merced are the nominees for eviction this week. One of them will leave the Pinoy Big Brother house this Saturday, December 22. Who will spend Christmas outside the PBB house?


Big Brother tested the bond of the celebrity housemates by having them undergo a face-to-face nomination during the seventh nomination night of Pinoy Big Brother Celebrity Edition 2. Last December 16, the housemates were given medallions that they were supposed to hang around the necks of those they chose to nominate.

The remaining housemates gave various reasons for wanting to evict their fellow tenant. They put medallions bearing the number 2 and 1 around the neck of those whom they evicted. Baron Geisler got a total of six votes, while Riza Santos and Yayo Aguila had four votes each.

Head of Household Jon Avila had the privilege of voting someone for eviction automatically. He used this right to vote for the eviction of Racing Goddess Gaby dela Merced. "Sorry for doing this. It's nothing personal. Dito sa ating bahay, you've spent the least time than any of the housemates, and you've experienced the outside world. Sorry," said Jon sincerely.

The four nominees then gave their pleas on why they should remain and spend Christmas inside the Big Brother house.

Riza asked the public to support her now that she is shedding her cloak of shyness. "Buong buhay ko, mahiyain ako at nahihirapan akong makipag-usap sa ibang tao. Ngayon lang, now that I've spent my time here, the walls I've built up my whole life are falling at ngayon lang lumalabas ang totoong pagkatao ko," said the beauty queen as tears fell down her face. "Sobrang gusto kong mag-stay dito sa bahay ‘coz the real Riza is coming out now. Sana I get to stay here longer."

As for the Wild Child who became drunk during their drinking spree last week, he told the viewers of the show: "Kayo na po ang bahala but ako talaga, buong puso ko gusto ko po dito. Tingin ko po, I deserve to prove pa to the people that I can be a better person."

In the end, four housemates got the black medallion signifying that they are in danger of being evicted from Big Brother's house. These are Baron Geisler, Yayo Aguila, Riza Santos, and Gaby dela Merced.

Pinoy Big Brother Celebrity Edition 2 airs every night on ABS-CBN's Primetime Bida after Ysabella while PBBCE 2 Uber is shown at 5:30 p.m. from Monday to Friday.