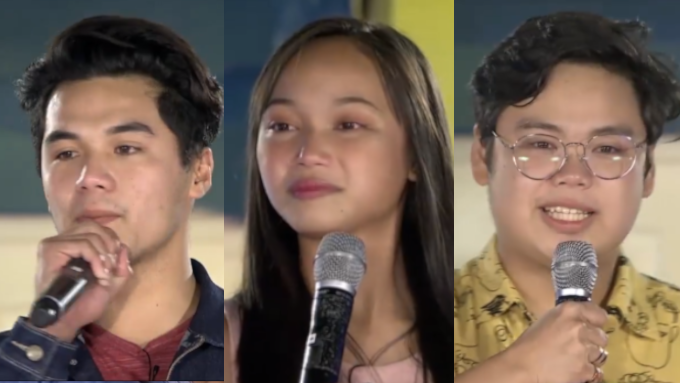 Teen housemates were dealt a shocking triple eviction twist in the May 5 episode of Pinoy Big Brother Otso. The three who got evicted were Alfred Beruzil, Gwen Apuli, and Jem Macatuno.

These evictees garnered the lowest SMS votes among six nominees. Alfred got the lowest percentage of votes at 2.62%, Gwen got 2.9%, and Jem got 5.98%.

The housemates who were saved were the following: Ashley del Mundo received the majority of the votes at 69.93%, while Yen Quirante and Shoichi Oka had 10.54% and 8.03%, respectively.

This was Alfred and Jem’s first time in the list of nominees. Gwen, meanwhile, was nominated last week but managed to evade eviction by narrowly beating Narcy Esguerra and Shami Baltazar in the public votes.

Alfred and Gwen were nominated via the traditional way. Their fellow housemates gave them points in the past week’s nomination round.

The teen housemates found Alfred to be bossy and stubborn while Gwen was nominated because she hoarded food when they were on restricted rations.

Jem, meanwhile, was automatically nominated for breaking the rule on discussing nominees. He jokingly threatened another housemate with nomination points while they were cooking.

Among the three evictees, it is Alfred who has had the biggest impact while inside the PBB house. The show even dedicated one episode to the 19-year-old delivery boy from Lucena, when he revealed that he is soon to become a dad.

During an episode aired on the third week of April, Alfred told Big Brother that he had impregnated his girlfriend Rose before he entered the PBB house. This news prompted the show to give him a challenge wherein he had to carry several delivery items around the activity area. He was then given the opportunity to see his girlfriend after he completed the challenge.

On the other hand, both Jem and Gwen were depicted only as supporting characters in the show’s episodes. There was a time when the focus was on Gwen because the other housemates saw her acting rude because she ate more than her portion of their limited food.

Jem got the spotlight when he helped housemate Batit Espiritu compose several songs so Batit could see his dad.

Fans of Batch Two housemates Lou Yanong, Andre Brouillette, Fumiya Sankai, and Yamyam Gucong are in for a treat this coming week due to Pinoy Big Bakbakan. These four adult housemates will face the remaining teen housemates in several exciting challenges.

Who will win? Viewers will find out soon.