Pinoy TV moms who are scene-stealers 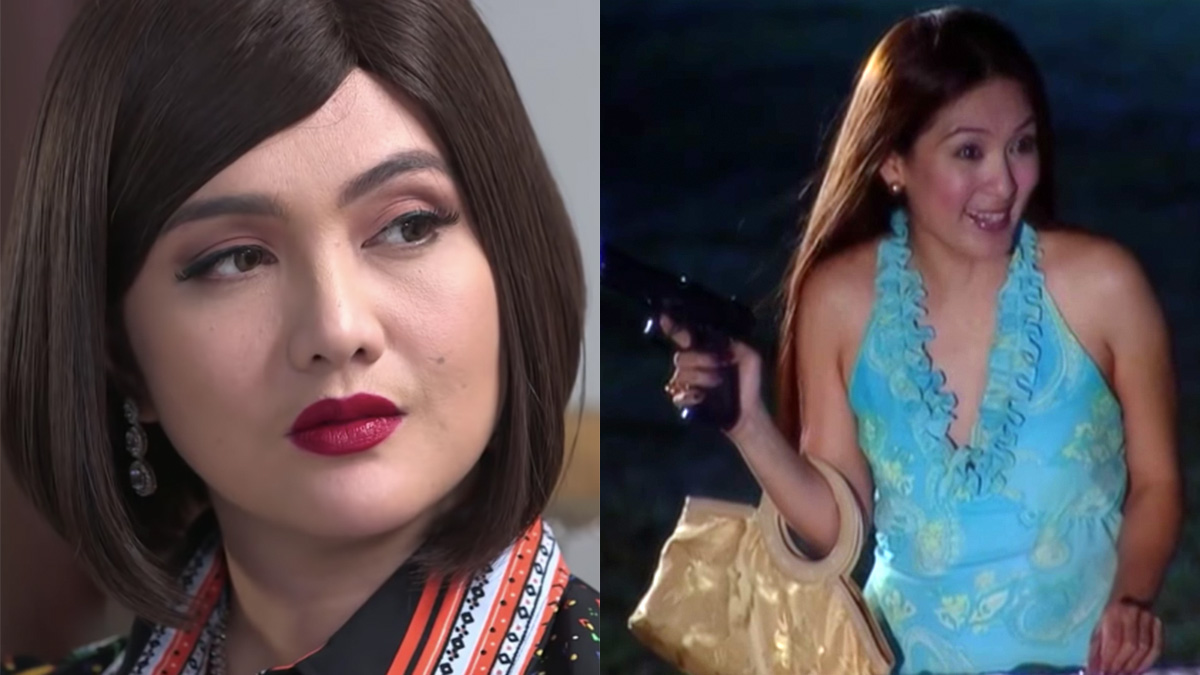 Most of the time, TV moms are kind-hearted, loving, and inspiring.

However, there are also TV moms who possess the qualities of a kontrabida.

Usually, kontrabida TV moms have over-the-top portrayals, blurting out unforgettable dialogues and displaying their remarkable mean streak while stealing the scene from the lead characters.

But what's common among all Pinoy TV moms is that they are all portrayed as loving parents who will do everything for their children.

PEP.ph (Philippine Entertainment Portal) lists down six Pinoy TV moms who were portrayed as kontrabidas. Here are their scene-stealing moments in their respective teleseryes.

Daniela Mondragon-Bartolome, played by Dimples Romana, is currently one of the most popular characters in the Pinoy teleserye scene. Aside from her witty kontrabida lines, she is also known for the wig that Dimples was wearing for the character.

In Kadenang Ginto, Daniela is the mother of Marga Bartolome (Andrea Brillantes) who will do everything to make her daughter happy and provide her with material things. Daniela's goal in life is to bring down her archnemesis, Daniela Mondragon (Beauty Gonzalez). Since Daniela was too busy with her evil schemes, she forgot to be a mother to Marga. Eventually, her daughter tried to commit suicide.

Scene-stealing moment: In one episode, Daniela brought food to Marga and her husband, Carlos (Adrian Alandy) to celebrate her success as the new CEO of Camila sardines. She later caught Romina cooking pinakbet. Daniela and Marga even mocked the food because of its smell, but she was surprised when Carlos entered the kitchen and said, "Ang bango naman no'n!" Daniela then felt threatened by Romina. Daniela later asked her maids to throw away the food she bought and told her maids, "Ipakain lahat nang 'yan sa aso, magluluto ako!"

More scene-stealing moments of Daniela are yet to be seen since Kadenang Ginto is still airing on ABS-CBN.

Betty Carreon, played by Jean Garcia, is the social-climber mom of Vanessa Carreon-Cayetano (Sunshine Dizon) who is obsessed with money and power. For this reason, she forced her daughter to marry the rich Nicholas (Mark Anthony Fernandez). Faced with loneliness and desperation for her original flame Leandro (Adrian Alandy), Vanessa fooled everyone by hiring an impostor, Sara (Iza Calzado), and making her undergo plastic surgery.

Betty was surprised by the sudden changes in Vanessa's behavior, not knowing that it was Sara all along. When Betty found out the secret, she did everything to take Sara out of their lives to save her daughter.

The Betty role is Jean's first kontrabida role in GMA-7 after transferring to the Kapuso network in 2006.

Scene-stealing moment: Aside from delivering quotable quotes, Betty's funny but violent schemes made her stand out, thanks to Jean Garcia's effective portrayal. Through flashbacks, it was shown that she killed Sara's mother (Gelli de Belen) through her pet snake, Reeno. In Episode 71, she kidnapped Sara and even prepared a coffin for her.

Sara tried to escape her but Betty and her friend Sofia (Joanne Quintas) were able to recapture Sara.

Betty had a change of heart and became be kind when her schemes backfired on her and she was left crippled.

Donya Charito, played by Jaclyn Jose, is the rich matriarch of the Carbonel clan always meddling with the affairs of her son, Ziggy (Gabby Eigenmann), particularly when he was choosing his wife. She never accepted Giselle (Angelika dela Cruz) for her son. For this reason, she became strict with her granddaughter, Darlene (Lauren Young). Charito later found out that her real granddaughter was actually Marilyn (Louise delos Reyes), who doesn't have a pretty face.

Scene-stealing moment: Donya Charito is definitely a scene-stealer because of her witty lines and harsh but honest remarks for her family members.

In one instance, she found out that Marilyn is her granddaughter. Charito decided to give Marilyn a makeover and asked doctors conduct plastic surgery on her. When Marilyn finally agreed to do the surgery, Charito suggested that she also have a boob and butt job, but Marilyn refused.

Emilia Ardiente-Torillo, played by Aiko Melendez, is the daughter of Governor Julio Ardiente (Tirso Cruz III). Aside from having her own political ambitions, Emilia is overprotective of her son, Arnaldo (RK Bagatsing). Emilia became concerned when Arnaldo got involved with Ivy Aguas (Maja Salvador), who is secretly plotting her revenge on the Ardientes.

Initially expressing her dislike for Ivy, Emilia later befriended her.

Scene-stealing moment: Emilia had a lot of catfights with Ivy in Wildflower, but what made it more scene stealing was the fact that her plans would always backfire on her.

One moment was when Arnaldo formally introduced Ivy as his fiance. As a gift, Emilia prepared a cake for Ivy, showing a decapitated bride as its centerpiece. Emilia then declared that she doesn't want Ivy for Arnaldo.

When Ivy decided to go home, Emilia stood in her way. Left with no choice, Ivy smashed the cake on Emilia's face.

Another moment was when Emilia organized a bridal shower for Ivy. Emilia offered Ivy a special cocktail drink that she personally mixed for her soon-to-be daughter-in-law. Ivy was smart enough to know that Emilia mixed it with poison and forced her to drink the cocktail.

Emilia immediately rushed to the bathroom and tried to vomit. To add to her worries, Ivy described the scary side effects of the poison... until Ivy finally admitted that she was just bluffing.

Helen, played by Almira Muhlach, is the overprotective mother of Ace (Sam Milby) always interfering with her son's affairs, including his marital (and extra-marital) problems.

Scene-stealing moment: Helen first made a mark on the show when she rushed to the house of Marissa (Nina Dolino), the best friend of Jade (Yam Concepcion).

Jade was the mistress of Ace. After a confrontation with Marissa, Helen shouted at Jade who was hiding inside the house, "In the end, lahat naman kayo may presyo. Bibigay at bibigay din kayo. So name your price, Jade Bartolome! Kahit magkano, just stay the hell away from my son!"

Cedes, played by Snooky Serna, is the mother of Emman (Dennis Trillo). Cedes harbors bitterness in her heart because she was raped when she was young, leading to the conception of Emman.

However, she still loves her children, and is willing to do everything for them. For this reason, Cedes resorted to violence after finding out that Emman's wife, Melanie (Jennylyn Mercado), had cuckolded her son.

Scene-stealing moment: After finding out Melanie's sin, Cedes immediately rushed to the town plaza, where Melanie worked as a nurse in medical missions.

The mother grabbed a megaphone and called the attention of the townsfolk. Cedes then asked Melanie to come closer so she could introduce her to the public.

After hurting Melanie, Cedes forced her to sit on a chair. She then started ripping off her clothes for everyone to see. She even told Melanie, "Dapat hinuhubaran ka ng ganito, parang bomba star! Ito ang gusto mo kasi makati ka!"

The commotion only stopped when Emman arrived to stop his mother.

In the end, Cedes and Melanie were able to forgive each other, as Melanie repented for her shortcomings as a wife.