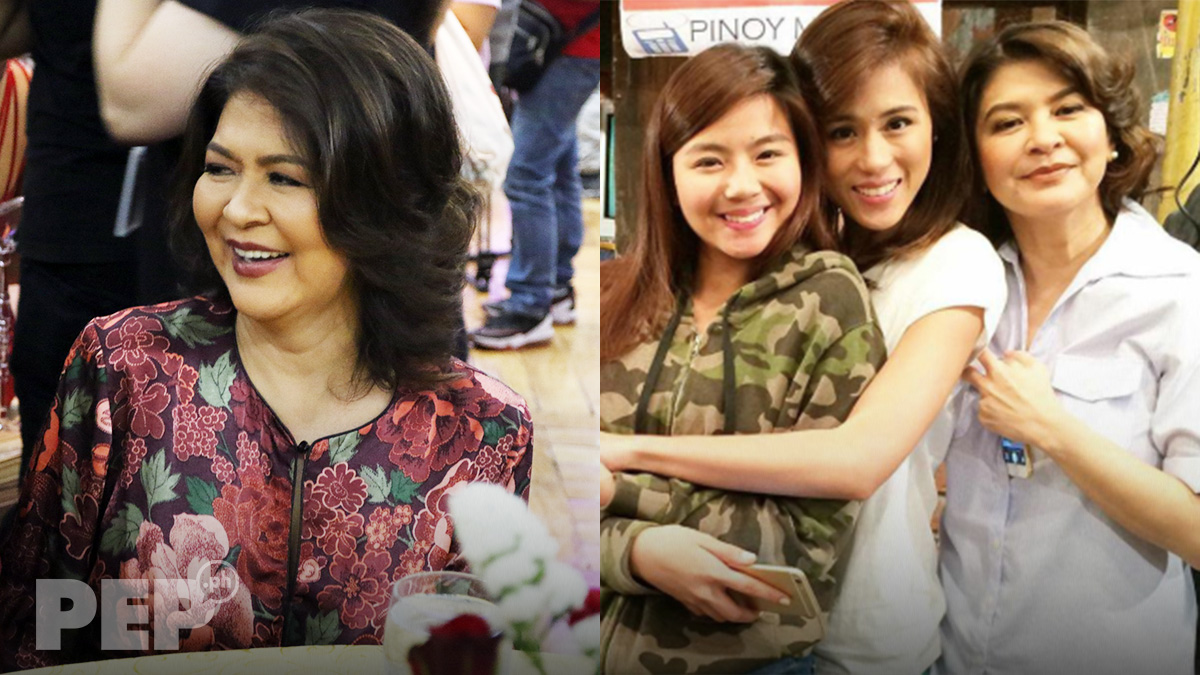 Sandy Andolong reveals that she has not been with Home Sweetie Home since October 2018.
PHOTO/S: Noel Orsal / ABS-CBN

Sandy Andolong disclosed that she has not been with the ABS-CBN sitcom, Home Sweetie Home, since October 2018.

This was the reason why Sandy was able to accept her comeback project with GMA-7, Dahil sa Pag-ibig.

Sandy told this to PEP.ph (Philippine Entertainment Portal) and other reporters during the May 17 press conference of Dahil sa Pag-ibig held at the 17th floor of GMA Network Center, Quezon City.

According to the veteran actress, she immediately accepted the offer since it has been almost five years since she last did a drama project.

Sandy's last drama project was the Kapuso prime-time series, Anna Karenina, which was aired from June to September 2013.

"This came nito lang, April, March, April. Since October, I have not been taping Home Sweetie Home.

In a separate solo interview with PEP.ph, Sandy disclosed the reason why she opted to leave Home Sweetie Home in October 2018.

"When I stopped doing Home Sweetie Home, pahinga ko yun, which was very timely kasi at that time, nagkasakit ako.

"It was a time na may virus na kumakalat na nagkakahawaan, tinamaan ako, and it took me a long time to recover.

"So, parang in my mind, naisip ko na siguro, kaya I have to leave the show already because I have to rest."

Last May 11, Home Sweetie Home was reformatted and new characters were introduced.

Among the cast, only lead actress Toni Gonzaga, with Miles Ocampo and Clarence Delgado, were retained.

Sandy admitted that she was not aware that Home Sweetie Home would undergo another reformat until Piolo Pascual decided to leave the show.

The 57-year old actress is happy with the latest developments of her previous Kapamilya show.

Her contract with the Kapuso network is only for the afternoon series, since she is a freelancer.

After starring in the sitcom, Sandy did projects for both ABS-CBN and GMA-7.

According to Sandy, she is happy with the set-up of being able to do projects with both networks.

"I'm very comfortable. I like it. I wouldn't have it any other way. Okay naman sa akin."

How would she compare working with ABS-CBN and GMA-7?

Sandy answered, "Okay naman. I always have a good ano, e, in terms of cast and the staff, I have a very good relationship with both sides ng stations.

"They both give me really good, good roles, alagang-alaga nila ang actors nila.

"But, of course, since I've worked many times with GMA, it's a nice feeling to be back and be with people that you know, people you've worked with.

What does she consider as the favorite projects she did with ABS-CBN and GMA-7?

For GMA-7, Sandy told PEP.ph, "Anna Karenina. The one I did with Direk Gina Alajar."

Sandy's character was Dona Carmela Monteclaro, the matriarch of the Monteclaro clan looking for their heiress named Anna Karenina. Her role was first portrayed by Rosemarie Gil.

In ABS-CBN, Sandy's favorite project was the 2012 afternoon series Kung Ako'y Iiwan Mo, where she played the mother of Shaina Magdayao.

She recalled, "I developed a very close relationship with Shaina, para ko siyang anak-anakan na up to this time."

At present, Sandy is looking forward to her newest role in Dahil sa Pag-ibig, as the mother of Sanya Lopez's character.

One of the scenes shown in the presscon trailer was a confrontation scene between her and Tetchie Agbayani, who plays the mother of Benjamin Alves, Sanya's husband in the show.

According to Sandy, she and Tetchie have already taped several fight scenes for the Kapuso show.

"We talk about it and then we do it, 'tapos pag nag-cut na, yakapan kami.

It is also her first time to be directed by Ricky Davao, who is one of her very good friends, and whom she shared the screen as co-stars in past projects.

"Nakakatuwa and I'm happy for him, when I see him direct na he's growing as an artist.

When Sandy was with ABS-CBN, she also got to work with her real-life husband Christopher de Leon several times.

The first was in a drama series that was also called Dahil sa Pag-ibig, starring Piolo Pascual, Jericho Rosales, and Cristine Reyes.

Christopher and Sandy played husband and wife, but Sandy's character was killed after two weeks.

They also worked in Kung Ako'y Iiwan Mo, where Christopher the father of Jake Cuenca, and Sandy played the mother of Jake's wife, Shaina Magdayao.

This time, Christopher only appeared in the show during its pilot week.

She said about her working relationship with Christopher, "I love working with my husband, kasi very giving actor yan, e, si Christopher.

However, it might take a while before they can work again with each other, since Christopher will be part of an ABS-CBN teleserye titled Love Thy Woman.

Sandy is okay with their setup of working in different networks, especially since they are both freelance actors.

In fact, they even exchange stories at night about their taping days.

Sandy has been actively doing TV shows and films since the 1970s.

She believes that her career lasted this long because of the training she got from veteran directors during the '80s.

"Yung generation namin is well-trained by the directors before, e. We were required to be very professional, to be on time, during our time, pagdating namin sa set, naka-fully made-up na kami, nakaayos na.

"Wala kaming stylist, wala kaming make-up artist, and we have to bring our own clothes.

According to Sandy, a lot has changed from the time when she was still starting out in the industry.

Despite being able to make a drama comeback after six years, Sandy is not in a rush to do more projects because she relishes her quality time with her husband.

"I do it one day at a time, kung ano ang dumating.

"Nag-e-empty nesting na kami, e, ni Christopher, so it's a luxury for us na we can be together, kaming dalawa lang and spend time together."