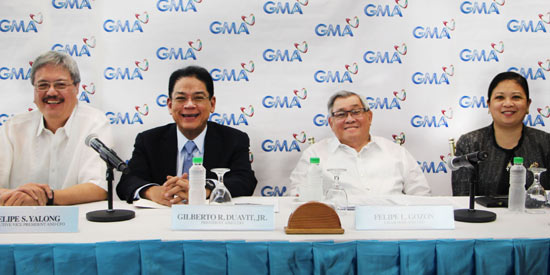 Election-related placements from the midterm elections, which boosted earnings in 2013, continued to play a factor as the Network’s consolidated revenues for the first half of 2014 fell 14 percent.

Total operating expenses went down 4 percent to P4.907 billion, mostly from the reduction in production costs equivalent to 5 percent in between periods.

Despite lower revenues in the first six months, GMA management remains confident that the Company will still hit its yearend target. “We have regained momentum as far as both our nationwide TV ratings and financials are concerned. We are optimistic that the third quarter will be a turning point for the company,” said GMA Network Chairman and CEO Felipe L. Gozon.

GMA International posted positive growth over the previous year. By the end of first half of 2014, flagship international channel GMA Pinoy TV grew its subscriber base by 8 percent. GMA Life TV also increased its reach by 20 percent, while GMA News TV International remains the top performer in terms of subscriber growth, posting an increase of 894 percent over the same period in 2013.

Wholly-owned subsidiary GMA Worldwide, meanwhile, has sold P37.5 million worth of locally made programs amounting to 1,930 hours to various countries such as Brunei, Cambodia, Malaysia, Myanmar, South Korea, Vietnam, the US, Nigeria, and Uganda.

Meanwhile, the Kapuso teleserye My Husband’s Lover, which tackled homosexuality on primetime TV, continued to make waves with the increasing sales of its lead actors Tom Rodriguez and Dennis Trillo’s album dubbed TomDen under GMA Records. The album scored a Platinum Record Award from its sales of over 16,000 units from October 12, 2013 to May 21, 2014.

The IM Ready mobile app, an offshoot of the IM Ready public safety portal, was likewise well received by the public as it became the number one app among (free) News applications in both Apple App Store and Google Play in July. The app is a product of the collaborative efforts between GMA New Media and GMA News and Public Affairs.

GMA sustained its TV ratings leadership in Urban Luzon and Mega Manila based on data from Nielsen TV Audience Measurement in the second quarter.

GMA led in Urban Luzon, which accounts for 77 percent of the total urban TV households in the country, with a 35.5 percent total day household audience share, up 2.8 points from ABS-CBN’s 32.7 percent and up 24.2 points from TV5’s 11.3 percent.

The Network also continued to score top ratings in its bailiwick Mega Manila, which represents 60 percent of the country’s urban TV household population, with a 37 percent total day household audience share. ABS-CBN trailed GMA by 6.8 points with 30.2 percent while TV5 was behind GMA by 24.7 points with 12.3 percent.

Partial 3Q ratings (July 1 to August 9, 2014 with the dates of August 3 to 9 based on overnight readings) showed GMA closing in on ABS-CBN in nationwide ratings, reducing the latter’s lead to a mere 0.2 percent.

In July, GMA was recognized as one of the top-performing listed companies in the country based on the ASEAN Corporate Governance Scorecard (ACGS) country reports and assessments for 2013 to 2014. This is the second year in a row that GMA was included in the list.

GMA also continued to add to its string of awards, bagging top honors from various award-giving bodies such as the U.S. International Film and Video Festival, Communicator Awards, Asia Rainbow TV Awards, among others.