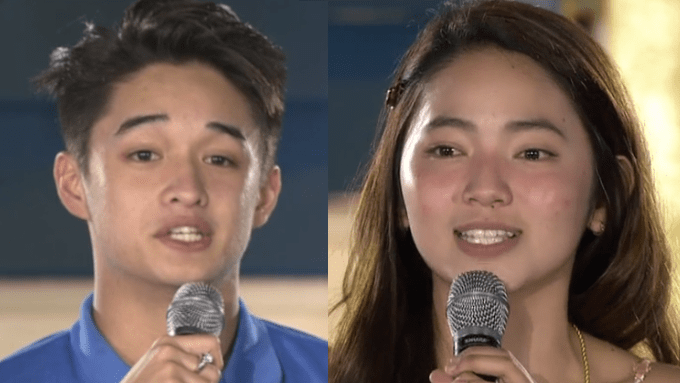 The Big Four of Pinoy Big Brother Otso’s Batch 3 have been revealed in the May 24 episode. They are Batit Espiritu, Tan Roncal, Ashley del Mundo, and Yen Quirante.

Batit and Tan made it into the Big Four by winning two separate Big Jump challenges. Ashley and Yen, meanwhile, got there by ranking first and second in the SMS votes cast by the public in the last 24 hours.

In the past voting rounds, it was always Ashley who garnered the lion’s share of the votes. For this reason, it was not surprising for this 15-year-old girl from Asutralia to get the highest votes again with 56.45%.

Yen got less than half of Ashley’s votes. The 16-year-old working student from Camarines Sur got 22.7% of the votes.

Ashley and Yen beat now ex-housemates Angela Tungol and Lance Carr. Angela, a 17-year-old dancer from Bataan, took 13% of the votes, while Lance, an 18-year-old basketball player from Davao, only had 7.86%.

Angela and Lance developed a loveteam while inside the house, so their eviction together was bittersweet. The two, however, were bashed constantly by a lot of PBB fans during their duration of the show, so many celebrated their exit.

The bashing stemmed due to a love triangle. Angela and Lance were not together in the start of their batch. Instead, Angela was able to get into the house immediately, while Lance was placed in Camp Star Hunt during the first week.

In that first week, Lance became close to Ashley. The two even admitted their affection for each other. This delighted viewers, who were thrilled to watch a blossoming romance between a Davaoeno and an Australian girl who is not fluent in the local tongue.

A week later, however, both Lance and Ashley were able to move into the house. It was at this point when Lance saw Angela, whom he found to be pretty. Since he found a new crush, he had a heart-to-heart talk with Ashley so they can stop their closeness.

Lance’s decision angered the fans. And since Angela was his new beau, Angela also received the hate that came Lance’s way.

The Big Four did not exit the house yet, because the public still needs to vote on who should be the batch winner.

The adults who will become the housemates in PBB Otso Batch 4 will also be introduced this Sunday, May 26.