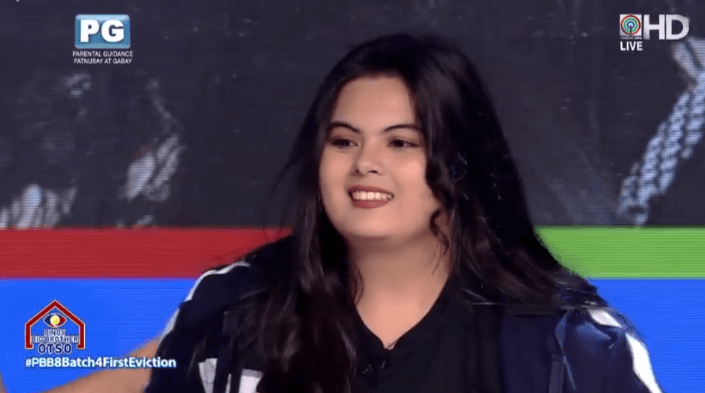 Jamie Salenga is the second evictee from Batch 4 of Pinoy Big Brother Otso.

Jamie Salenga is the second evictee from Batch 4 of Pinoy Big Brother Otso.

The Responsible Rampanganay ng Quezon City exited the house in the episode aired on Sunday, June 9, after she received the lowest amount of votes from the viweing public.

Jamie only garnered 8.96% of the votes. She lost to two other nominees: Sky Quizon, who received 69.9%, and Mae Alfante, who received 21.14%. Jamie had several big moments in the house.

The 27-year-old call center agent was one of the leaders of the first weekly task, where the housemates were only given 80,000 seconds of sleep for the whole week.

During the nomination round, however, Jamie nominated Sky for supposedly being bossy. The confident plus-size model was also one of the voices who was instrumental on the forced eviction of Banjo Dangalan.

It can be remembered that Banjo was evicted due to his rape jokes and supposedly lewd behavior.

Jamie, along with Diana, found his behavior alarming, so they brought this observation to the rest of the housemates and to Big Brother himself.

All of these moments crafted a negative image of Jamie to the PBB viewers, which resulted to a low voting percentage. The other two nominees also had more positive content during the past week. The show featured Sky’s developing feelings for Diana Mackie, and Mae was one of the leaders of the second weekly task.

There was also an announcement that PBB Otso will end in eight weeks, so several big moments need to happen within this two-month period.

First, the batch 4 will have its own big four. Then the big four of each batch will return to the house. The members of the big four for Batch 1 were Jelay Pilones, Kaori Oinuma, Karina Bautista and Lie Reposposa.

These 12, plus the incoming Batch 4 Big Four, will have to compete to become the Big Winner of this season.