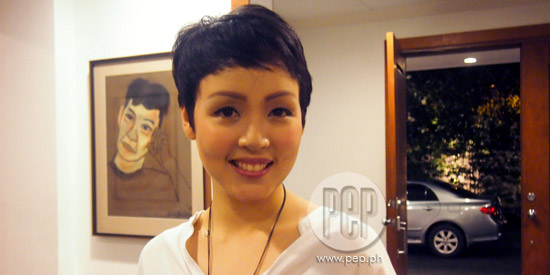 After winning the Best Supporting Actress award for the Cinemalaya entry Hari ng Tondo, Cris Villonco will soon be seen as a kontrabida in the GMA-7 afternoon series Ang Lihim ni Annasandra.

Cris Villonco laughs off rumors saying that she is just like the sheltered character that she played in the Cinemalaya X entry Hari ng Tondo.

In this indie movie, Cris and her cousin Rafa Siguion-Reyna portrayed rich kids who went to Tondo to live with their grandfather (played by veteran actor Robert Arevalo).

Cris—the granddaughter of veteran actress and former MTRCB chairman Armida Siguion-Reyna—said she did not have a hard time working in the slums of Tondo.

She also stressed, “You know, we have the best of both worlds, if you think about it, na ganun ang buhay namin kasi na-experience namin.”

Her portrayal in Hari ng Tondo earned for her the Best Supporting Actress award in the Directors Showcase category.

Cris said she never expected it since it’s been a while since she last worked as an actress in a movie. Most of the time, she is part of theatrical productions, the most recent of which is Ghost the Musical.

“First of all, this my second movie in a span of 15 years. My first was with FPJ,” Cris recalled.

The actress was referring to the late King of Philippine Cinema Fernando Poe, Jr.

She continued, “I had hardly done any TV works, I’ve only done theater works.

“When I did this, it was more of my tita saying, ‘Pakiusap naman, gawin mo naman ‘tong movie namin. I think this is a funny way to present the movie.’

“I just said yes, siyempre, kasi pamilya ko ‘yon, since we’ve been working together since Aawitan Kita, and we did not expect it to win.”

FIRST TELESERYE. After being active in theater and taking part in the 10th edition of Cinemalaya, Cris will soon be seen in GMA-7's upcoming TV series Ang Lihim ni Annasandra.

Cris feels very excited about the project since this is her first TV series. Ang Lihim ni Annasandra is slated to airdaily starting this October on GMA Afternoon Prime.

“I’ve been wanting to try out TV, I’ve never done a teleserye my whole life. I wanted to do it,” she said.

In the series, Cris is cast as Lorraine Esmeralda who will do anything to destroy the relationship of Annasandra and William (played by Andrea Torres and Mikael Daez, respectively).

Since a lot of kontrabida actors are hated by televiewers, Cris said she’s ready to earn haters for portraying the character.