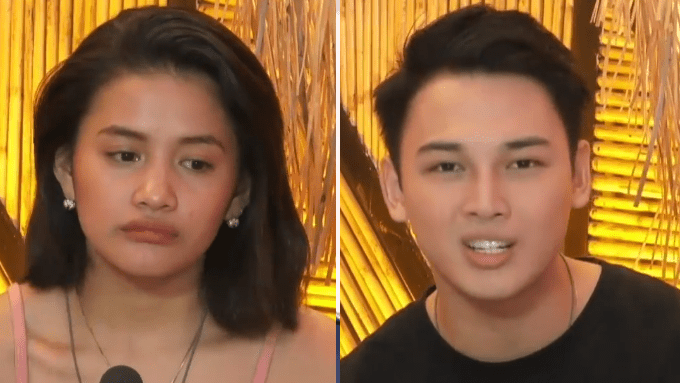 The Pinoy Big Brother Otso house got a little heated in the episode aired last night, April 14. This was because housemate Mae Alfante influenced her peers to question the gender of Sky Quizon, a male housemate whom she suspected was gay.

Mae’s questioning started even during their first week in the house. She noticed early on that 21-year-old male model moved softly and that he follows a comprehensive skin regimen.

The 22-year-old female dancer from Davao was not apprehensive to call Sky out. She teased him constantly by calling him “bakla,” even if Sky already appeared annoyed because of this.

During the previous week’s jump rope task, for example, Mae made fun of Sky because he looked like he was having a hard time keeping up with his jumps.

Sky was catching his breath when he retorted. “Sige, hindi na for you. Okay tayo?”

Mae also led the charge in talking to the rest of the girls about Sky.

One night, before they went to sleep, she complained to Hasna Cabral, Diana Mackie, Franki Russell, and Kiara Takahashi that Sky was getting too physical with his actions. She mentioned one incident when he hurt her when he threw a water-filled balloon at her.

But Mae mentioned that she’s not fully sure that Sky is gay because he confessed that he has feelings for Diana a few days ago.

This made Mae remark that Sky might just be using Diana to hide his identity. “Napapaisip tuloy ako. Na para takpan lang,” she said.

The situation escalated one day in the living room when the rest of the housemates noticed Sky putting lotion on his feet. Hasna Cabral and Akie Poblete commented that he brought a lot of cosmetics in the house, because they have also witnessed him applying a lip balm and moisturizer.

Mae, who was sitting in the far end of the room, was quick to chime in with his usual comment. “Parang bakla talaga,” she said to the rest of the housemates.

Hasna heard this and decided to press on and ask Sky, who was sitting beside her, if he gets attracted to men.

He then pointed out that Mae should be more respectful because she has a gay brother. “Hindi dapat maging insult ang pagiging tomboy, and pagiging bakla,” he told Mae.

Sky talked to Kuya about this situation in the confession room. He confirmed that being called gay is not new to him, and he’s been called that even when he was a young school boy.

Was this hurtful? Sky said yes, but he eventually learned to brush it off.

Sky also continued to explain what he knows about gender identity. He knows he is a boy, but he’s open to experiencing love across all genders.

“Now I see myself as a heterosexual male, but if you would ask me Kuya, if I am open to maybe falling in love to another man, to a gay person, to a lesbian? I don’t see anything wrong about that, Kuya. Ayoko pong maging mabiktima ng mga labels. Ayoko pong maging parte nung pagvi-victimize ng ibang tao. So if you ask me Kuya I’ll be open. Ang mas pinaniniwalaan ko po not the gender but I’m serious about love, I’m serious about falling in love. Seryoso po ako sa pag-ibig. At sa tingin ko po yun ang mas makapangyarihan, pag-ibig over any gender,” he said.

Mae also talked to Kuya in the confession room. She explained that she kept bringing up Sky’s gender because she wants to help him. She talked about her gay brother, who formerly struggled because of his identity.

Kuya, however, advised her that she might be hurting Sky with her actions. The house’s mentor said the experiences of Mae’s brother should not be equated with what Sky is experiencing. This made Mae realize that she might be at fault.

Mae decided to apologize to Sky after she left the confession room. Sky accepted her apology, and he assured her that their friendship remains.

“Never akong na-offend sa mga hirit na yun even how many times. You don’t have to feel bad,” he said.

Sky and Mae then hugged to mark their reconciliation.