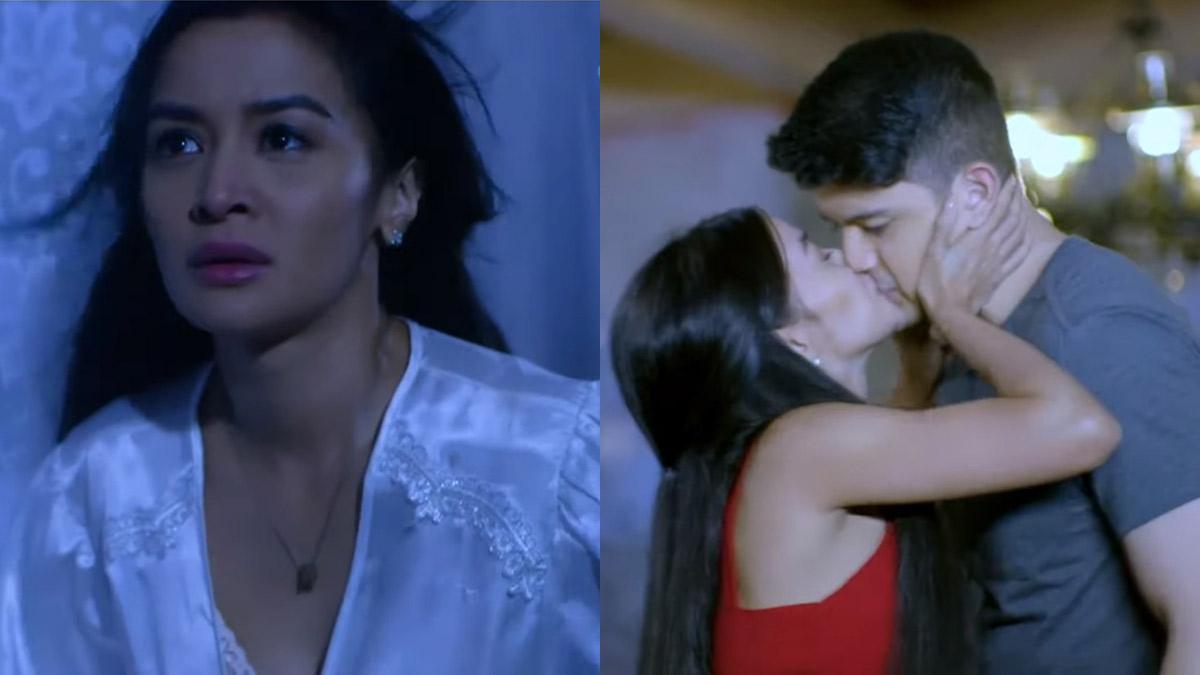 The pilot episode aired on the Kapuso Network yesterday, July 22, 2019.

The suspense mystery-drama series begins by showing Naomi Espiritu (Kris Bernal) working on a bridal veil. Suddenly, it becomes windy inside the workroom and she feels a certain presence. She hears a voice calling her name and tries to search for the voice. She becomes bewildered. She screams as she sees a female ghost figure. She hurriedly runs out of the house as she continues to hear voices calling her name. In a moment of frenzy, she bumps into her boyfriend, Matteo Divinagracia (Rayver Cruz).

Matteo leads her back inside their antique-looking house and tries to calm her down. He just got back from a business trip. Naomi opens up, expressing that she has been seeing the “talking ghost” once again. Matteo is sceptical about the ghost that Naomi claims to have seen for some time now.

Matteo and Naomi have been in a relationship for two years and they live together in the old house. Although he loves Naomi, he still isn’t sure about his feelings for her. While talking up to one of his friends, Matteo says he finds Naomi “clingy” and isn’t’ sure if he loves or just pities her. He still hasn’t forgotten his high school sweetheart, Yvie.

One night, Matteo decides to break up with Naomi. He feels that the relationship is not working anymore. “Walang spark. Something is missing. All I know is that I am not happy anymore," he says, causing Naomi to burst into tears.

Naomi tries her best to stop Matteo from leaving her. Nonetheless, he packs his bags and leaves Naomi for good.

After some time, Matteo attends a Halloween party with his friends. He lays eyes on a lady clad in a sexy black outfit and he invites her to go somewhere private. The lady in black agrees before excusing herself to get ready.

Matteo mingles with the crowd and spots the lady again. He tries to make a move on her but it turns out to be Katya (Kim Domingo). Matteo mistakenly thought Katya was the lady he invited earlier since they were wearing almost identical outfits. Katya felt disgusted by his move and called him "bastos."

The ex-couple Yvie and Matteo finally recognize each other.

Wanting to reconnect again with his high school sweetheart, Matteo gets Yvie’s number.

While talking to his friend, Matteo describes Yvie as his TOTGA (The One That Got Away).

Matteo made a surprise visit at the pre-school that Yvie is working at. He tries to ask Yvie out for lunch but she tries to avoid Matteo. Finally, Yvie opens up to Mateo and tells him about her mother diagnosed with schizophrenia, a mental illness.

They visit Yvie’s mom at a mental health facility. Matteo talks to Yvie’s mom who recognizes him. After the visit, Matteo brings Yvie home.

As they talk, Naomi watches them from a distance.

The teaser of future episodes of Hanggang sa Dulo ng Buhay Ko show that Matteo asks Yvie to marry him. Naomi is furious about this development and blames Yvie for the breakdown of her relationship with Matteo.

How did the pilot episode of Hanggang sa Dulo ng Buhay Ko fare in the ratings game according to data provider Kantar Media?

On this day, the new GMA-7 teleserye was pitted against ABS-CBN's Kadenang Ginto.

Meanwhile, the Kapamilya show Kadenang Ginto got a Kantar TV rating of 18.6%.