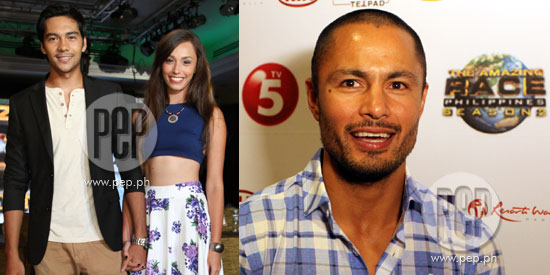 While his name is already associated with The Amazing Race Philippines (TARP), Derek Ramsay insists that he should not be the focus of the Pinoy adaptation of the American reality show.

“This isn’t my show, it’s theirs [contestants].

“People aren’t gonna watch this because I’m into Team No. 1, I’m Team No. 2 or I’m part of the team being eliminated.

“To make the show more exciting, it’s them, it’s their story.

“I’m just here to be a part of it,” the TV host-actor told entertainment reporters during the press conference of The Amazing Race Philippines.

This season, 11 pairs will race around the Philippines to be the grand winner of TARP Season 2.

Derek boasted that the second season is more exciting and explosive, which impressed even the executives of Active TV.

He related, “It’s a privilege to be told that our material is even better than the ones abroad.

“I was given a tap on the back, and I said, ‘Well, that’s how we do it in the Philippines. It’s more Philippines.’

“On and off the camera, there’s a lot of drama. Makikita n’yo na lang po ‘yon.”


"We had to separate teams from each other..."


In fact, Matt Edwards and Phoebe Walker (dubbed as Team Dating Couple) even had an altercation that prompted the organizers to physically separate them. The racers sometimes resorted to shouting matches and cursing at each other.


The Amazing Race Philippines Season 2 will air its pilot episode on October 6. It can be seen on TV5 from Monday to Friday at 7:30 p.m.; Saturdays and Sunday at 9:00 p.m.

GOALS AND MOTIVATIONS. While the main goal of the competition is to be always the first team to arrive at the pitstop, racers are more motivated to achieve this because TV5 is giving away more prizes this season.

Aside from the P2 million cash prize, members of the winning team will each receive a house and lot, and a brand new SUV.

Competing for these prizes is an interesting mix of personalities.

SECRET TO SUCCESS. Derek believes that The Amazing Race PH is successful here and in other countries because of the life-changing experiences it offers to racers daring to win the competition.

“It gives so much opportunity to many people, you find many life-changing experiences, you get to travel around.

“That’s why the show is successful, not because of what prize it gives,” the Kapatid host-actor told reporters.

He added, “A lot of reality shows out there, it gives the same prizes, the same amount, but this show gives more than that.

“It can make you or break you. A lot is involved when it comes to the race—a lot of strategy, a lot of hard work, a lot of physical endurance.

“For me, given the opportunity to travel in different destinations, get to do the challenges, that’s what makes this show successful.

He also stressed, “Yes, the drive or motivation to win is the P2 million, the house and lot, and the car.

“But I think, I speak on behalf of everybody here, it’s the opportunity be in this successful show, for them to experience being on a show like this.”