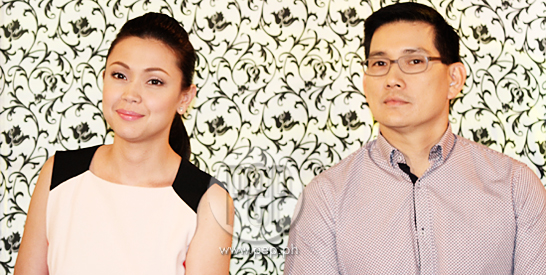 Be Careful with My Heart will have its "Happy Ever After" finale episode on November 28. Richard Yap, who plays Sir Chief in the daytime teleserye, comments on whether the next show will be able to emulate their success: "Well I think, kahit naman siguro kung kami ulit yung papalit dito sa slot na to, we’re not sure kung ganito pa rin [yung ratings.] So I think everybody just need to do their best and nasa story din 'yan, e, nasa story, s


Members of the press had the chance to talk with the cast members of Be Careful with My Heart during the "Happy Ever After" farewell press conference last September 25 at 55 Events Place. ABS-CBN's daytime teleserye is slated to air its finale episode on November 28, two and a half years since it started airing in July 2012.

On the other hand, Jodi Sta. Maria made it clear that “if only” they are both single, then the possibility of her falling for her onscreen partner is rather high.

But she stressed the use of “kung” or “if only” to avoid misunderstanding. Jodi is currently in a relationship with Jolo Revilla who recently escorted her during the premiere of her latest movie Maria Leonora Teresa.

Also, to make up for the time he wasn’t able to go home early or had to get out of the house before dawn for tapings, Richard is planning to spend quality time with his family this Christmas.

ON BE CAREFUL WITH MY HEART. Now that the daytime teleserye is slated to end its two-year-run, Sir Chief admits feeling emotional.

“Of course siyempre, there’s a little bit of sadness na matatapos, siyempre it gave a lot of opportunities, not only to me pero sa lahat ng katrabaho namin.

“But all good things come to an end nga so we’re just looking at it with positivity.”

Richard also noted the changes in his life for the last two years.

“Marami talagang nagbago sa akin, I don’t have as much privacy as I did before. Pero I think it’s all good, it’s all positive naman.”

Will he cry when they have their last taping day?

ON PRAYBEYT BENJAMIN 2. Richard Yap is set to star with Vice Ganda for the second installment of comedy film Praybeyt Benjamin. The actor reveals that they will start shooting for the Metro Manila Film Festival entry next week.

“But I think it’s a continuation of Praybeyt Benjamin 1 pero parang ito yung future so we will have to wait for the movie.”

FUTURE PLANS. The actor is eager to expand his horizons when it comes to acting, even saying that he’s willing to do dark roles if the Kapamilya Network allows him.

The businessman-turned-actor is also ready to switch from bida to kontrabida. “Ok lang din, why not? Basta it’s a good role,” he stressed.