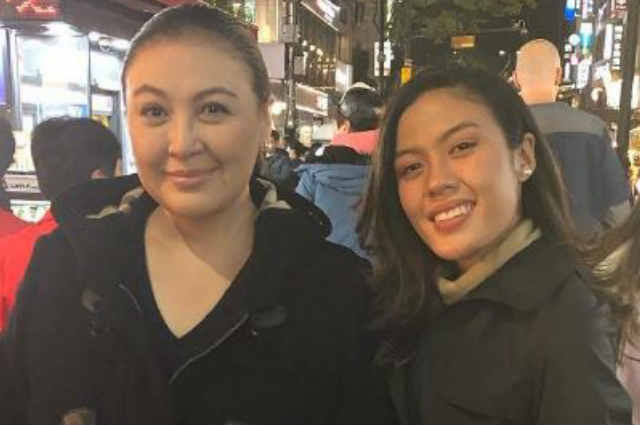 Sharon Cuneta said she declined to do a TV show so that she would be free to visit her daughter Frankie Pangilinan who is studying in New York.

The actress/singer/TV host served as a coach in the third season of The Voice Kids but not in its ongoing fourth run, leaving behind original coaches Lea Salonga, Sarah Geronimo, and Bamboo to fulfill their duties in mentoring new singing talents.

The Megastar made the announcement in a video posted on August 15 on her YouTube channel called Sharon Cuneta Network.

The video served as a send-off for Frankie, and it also featured her younger sister Miel.

Sharon, Frankie, and Miel had a lively discussion on what Frankie looks forward to learning in New York, on how Frankie and Miel’s sisterly bond became stronger the past months, and why Sharon supports Frankie’s decision to study abroad.

When Frankie said that she’d be back home every three to four months, her mother asserted: “Otherwise, I’ll be flying there when I’m not working.”

Sharon then explained, “Actually, I’ve been declining, not even considering, offers for a new show because I don’t wanna be tied down here weekly.”

This way, she explained, she can freely fly to the U.S. and visit Frankie in New York.

Frankie gave her reaction to Sharon’s decision, which she learned on the same day the video was made.

Sharon explained: “It’s priorities. I’m old enough and I think I’m secure enough, thank God, to be able to decide on things like that, and take my real feelings into consideration and follow my priorities in order.

“And my priority now—it’s always been but now more than ever—my family because I’m in a good position.

“I have obligations. I love my work, too, but not half as much as I love my kids. So I want to be able to go for a couple of weeks without worrying.”

She added that she’s “in a singing, performing in a concert, and doing movies mode,” and that she doesn’t “want to have that weekly heavy schedule.”

Sharon is set to share the stage with Regine Velasquez in a two-night concert, titled Iconic, on October 18 and 19 at the Araneta Coliseum.

Meantime, she and her husband Senator Francis “Kiko” Pangilinan, with their children Frankie, Miel, and Miguel, are already in New York to spend time with Frankie and see the incoming college freshman settle in her new environment.

Sharon wrote in the caption of her August 15 post: “As I upload this, we have just arrived in New York. Praying we all make it through having to leave her here when it's time for the rest of us to go back home to Manila!”

Her next video, posted on August 20, showed Sharon, Kiko, and Frankie walking to where they would be having dinner.

Sharon had KC and the rest of their family in her latest video, posted on August 23, showing all of them walking to a ramen restaurant to have dinner together.