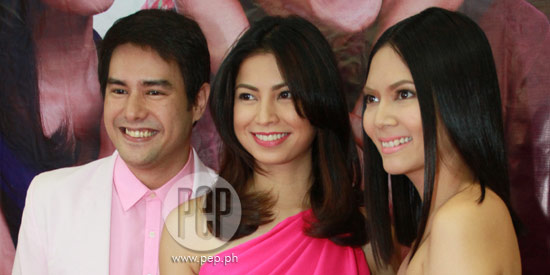 Gabby Eigenmann (left) will miss the cast of Dading, his afternoon show on GMA-7 that will end on October 10. In this photo, he is joined by co-stars Glaiza de Castro (middle) and Chynna Ortaleza.

Gabby Eigenmann is more than satisfied with the outcome of his first lead role in the afternoon drama Dading on GMA Network.

“How can I be not satisfied?” he told reporters who asked if he's satisfied with his current project that will air its finale next week, October 10.

“Ang sarap ng feeling na ganun 'tapos they would always be reminded of how the story was able to touch other people's lives.

Speaking of moral lessons in Dading, Gabby said that while doing the role of Carding/Dading Velasquez, who stood as a father to the daugher of Glaiza de Castro's character, he realized that gay people should be treated equally like heterosexuals.

“They're people. They're not different naman from a woman,” he stressed.

“Actually, sinabi ko na 'to dati, sila, they have the softest heart.

“They also give you an advice as lalaki sila or as babae sila so, nakukuha mo pareho kaya mas magaan ang pakiramdam.”

The Kapuso actor does not mind portraying a gay character in future projects.

For Gabby, “It's a profession. Kung ano man ang ibigay sa akin na project, I might be of service.

“Kumbaga, I'll do the best that I can.

Gabby was awarded Best Supporting Actor in a Drama Series by ENPRESS Golden Screen Awards in 2011 for his portrayal of Nicandro Mejia in the now defunct TV series Munting Heredera.