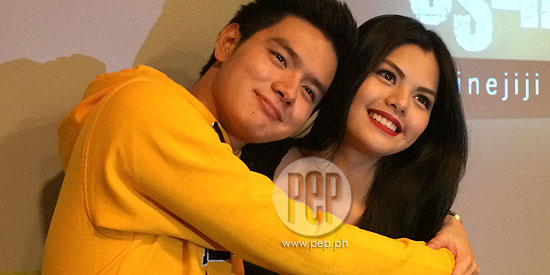 Artista Academy alumni Akihiro Blanco and Chanel Morales are both thankful to be continously given projects by their home network TV5.

In an interview during the recent pocket press conference for TV5's Wattpad Presents: Poser, Chanel said it is really an advantage to be a homegrown talent of a TV network.

“Big advantage din kasi once you're old na from your network, you know the dos and don'ts, aalagaan ka nila.”

Akihiro, on the other hand, is grateful that he and other young TV5 talents are given opportunities to improve their acting skill through workshops.

Recently, the talents of TV5 attended an acting workshop, which is based on the style of American acting teacher Eric Morris, under director-actor Leo Martinez.

Akihiro said it prepared him for his new lead role in Poser.

Akihiro and Chanel will be paired anew in TV5's week-long TV adaptation of Wattpad novels titled Poser. This show will air at 7:30 p.m. from Monday to Friday, starting October 6.

The online novel written by Maxinejiji already has 400,000 reads in the popular community of readers and writers.

Akihiro and Chanel will give life to the main characters of Poser named Brix Torres and Jammy Ocampo, respectively.

In the story, Jammy will meet Brix while conversing with the latter using the Facebook account of her bestfriend, an up-and-coming TV personality named Angel Gonzales (played by Sam Rodriguez).

What will happen if Jammy finds out that her bestfriend Angel is already in a relationship with Brix?