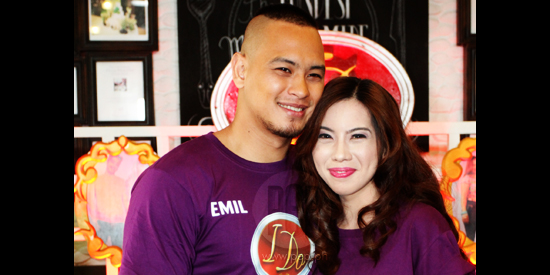 Honey Avelino with boyfriend Emil Bautista from the reality show I Do. Honey, the older sister of Paulo Avelino, would like to enter show business if given the chance.

I Do contestant Honey Avelino says that her younger brother Paulo Avelino has not yet introduced KC Concepcion to their family.


Honey admitted: "I haven’t met her [KC] personally pero I really want to get to know her more. If ever Paolo wants to be with her in the future, why not?”


The reality show contestant described the daughter of Sharon Cuneta as "pretty" and "mabait."

ON PAULO AVELINO. Honey described how it’s like living in the Avelino residence. She also revealed that Paulo was already mysterious even during his teenage years.

“Ever since we were young, reserved talaga siya.

When Honey was asked about the relationship between Paulo Avelino and KC Concepcion, she carefully answered, “Friends daw sila.”


Honey was one of the contestants of I Do who were interviewed by the media last October 8 at the Cocoon Hotel. She and her boyfriend Emil are among the Top 5 couples in this reality show hosted by Judy Ann Santos.

I DO VILLAGE. It took a while before the public found out that Honey is indeed related to the ABS-CBN actor. Honey pointed out that even the couples inside the village had no idea that they are actually siblings.

“I’d like to say naman na when we entered, at first, we auditioned. Nag-audition talaga kami.

“Unlike sa iba na invite. We were not invited. We joined the audition process, tapos ayun.

“So maski sila di nila nalaman, only after the show. Para at least naman, yung treatment, pantay, yung get to know me for me.”

Honey joined I Do with her boyfriend of six years, Emil Baustista.

“Sobrang happy, super happy to be a part of the top five.

Being in a relationship for six years already and counting, Honey talked about their advantages as a couple and the downsides of knowing each other “too well.”

“And for the others naman, yung communication kasi nila, that we were able to learn more or be more mature.

“So parang, [we learned] na there’s a way pala to properly address it ng hindi rin kayo nakakasakit or nagiging worst yung away after,” she elaborated.

The major difference between the couple is that Emil is the bunso of their family, while Honey is the panganay.

After being together for a long time and after knowing each other’s quirks, did they ever plan to settle down?

“That’s why meron kaming ultimatum, bago mag-30, dalawang years pa 'yan. So at least we have time to save up.

ON ENTERING SHOWBIZ. With Paulo becoming an award-winning actor, did Honey ever think about joining showbiz?

When asked whether it would be okay if her boyfriend gets to act opposite leading ladies, Honey said with a laugh, “Kung may partner man, basta gusto niya.”

In a previous report from ABS-CBN News, outgoing and cheerful Honey Avelino revealed that she actually dreams of becoming a television host or reporter. Aside from talk shows or news segments, would she also be willing do dramas or go sexy someday?

“Kasi when when we watch [Paulo’s teleserye] kasi pag kilala mo di mo maseryoso, e. Pero when I tried it na, when I placed myself in his shoes during the workshop, iba, iba pala talaga, ang hirap,” Honey explained.

While staying inside the I Do village, viewers witnessed her fights with Emil, their sweet moments, and all the ups and downs that they went through, including the big revelation about Honey’s blood relation with the 26-year-old actor.

The 28-year-old businesswoman wasn’t spared from netizens' prying eyes. However, she also revealed that their comments haven’t affected her significantly.

“May mga nag-ti-tweet din. Minsan may nagko-comment like yung away namin, ganyan.

For his part, Paulo gave advice to Honey, knowing how tough the industry can be.

“For him, of course, nag-advice rin siya. Kasi he’s been through a lot.

“So, if you want it, then all good, kasi di ba it comes with what you’re entering, e.”

Still, Honey confessed that the reason why she joined I Do was because she’s with the love of her life.

PROUD SISTER. Honey was vocal in describing the traits that she admited in her younger brother Paulo.

“For me, siguro, yung pagiging not open niya, kasi that’s what keeps him more mysterious, e, and people want him more.

“Sabi ko nga, e, when I’m watching his shows, kahit nung bata pa siya, once he wants something, once he does something, talagang binibigay niya lahat.