What it's like to have back-to-back meetups with Jung Hae In, Park Seo Joon 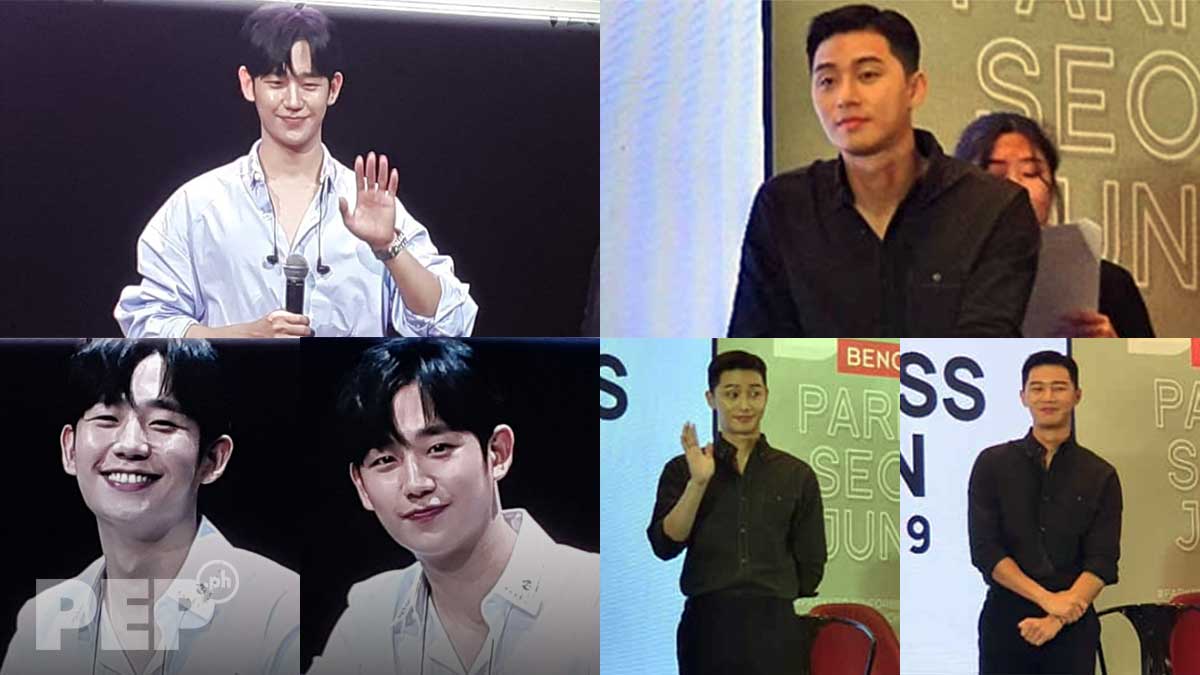 Something In The Rain star Jung Hae In (left) is eager to please Pinoy fans at his One Summer Night fan meet; Fight For My Way star Park Seo Joon warms up to Philippine media a day before his fan meet.
PHOTO/S: Rachelle Siazon / Nikko Tuazon

There's nothing like getting up close with Korean heartthrobs Jung Hae in and Park Seo Joon in one day!

One is super charming with his boy-next-door looks, while the other quite elusive but also makes you feel kilig whenever he unexpectedly flashes a chinky-eyed smile.

It's a Saturday, September 28, when Hae In holds a fan meet with his Pinoy fans at the New Frontier Theater in Cubao, Quezon City.

He is eager to please with the way he accomodated requests for hugs and selfies with a select number of fans who came on stage with him.

Much like his character in While You Were Sleeping, where he plays a confident police officer, ready to charm you with either his all-around friendliness (see episode 12 of the series), plain good looks, or his sexy six-packed abs (see episode seven)!

I like how he shows appreciation for his fans by seemingly knowing that every adorable gesture he makes would melt hearts among the excited crowd.

He seems approachable when he met the three lucky letter-senders who asked for love and life advice from him.

After reading their letters in front of the audience, Hae In each gives them a "prescription" to their problem including a warm hug and a selfie with each of the letter-sender.

His body language—like the way he widely opens his arms before hugging a fan or even how he takes several pictures to achieve the perfect selfie with his fan—shows his thoughtfulness.

JUNG HAE IN AS DR. LOVE

During that segment, he also takes his time thinking of the best advice he can give to the letter-senders.

Interestingly, one letter-sender actually reveals she has broken up with her boyfriend because of too much "fangirling" over Hae In!

For a while there, Hae In is rendered speechless. Then he says that as much as he appreciates the love from his avid fan, he wishes for her to reach the point where she learns to love herself more.

He adds that cultivating self-worth is important before getting into a relationship.

Such wise words from Hae In, right?

Another highlight is when he plays "Mission Impossible 123" where he is given 123 seconds to do the following:

1. Flip a bottle and keep it upright; 2. Kick a bottle cap off from a person holding it; 3. Count the bills and coins given him while answering random questions from the event host.

It's pretty cute how he still attempted to finish counting the bills and coins even when his time was up. Talk about the kind of guy who refuses to give up and just wants to get the job done!

That Hae In makes an effort to sample Filipino staples like peach mango pie from the country's local fast food and even our local beer indicates his interest to know our country more.

At one point during his interview on stage, he says he would love to go back to the Philippines again, not just for a fan meet but also for some leisure time where he can explore some of the beautiful places he heard about in our country.

The reporter in me would have loved to know more about his personal life, like if he's dating someone at the moment or the traits that he's looking for in a potential girlfriend.

But all he has touched on is that he wants to get married at 40.

He's only turning 31 years old, so until then there's still much time for him to perhaps play the field and find the one who will forever win his heart.

Capping off the enjoyable night with Hae In is a hi-touch session where he gives a high five or shakes hands with hundreds of fans who attended the fan meet.

Being one of those in the venue, I have experienced touching the hand of Hae In (it's soft like a lady's) and tell him up close, "You are so cute!"

His engaging smile is more than enough response as each and everyone waited for their turn to get close to him after the two-hour program.

Back-to-back with this delightful fan meet with Hae In is the earlier press conference with Fight For My Way star Park Seo Joon.

My first impression of him is that he's a bit like his character in What's Wrong With Secretary Kim.

During the first few questions, he seems a little reserved and serious with the way he speaks about being here in the Philippines for the first time.

But you know how it is with guys exuding a pa-mysterious vibe, you end up wanting to know more about Seo Joon. You wonder about what could he be thinking about as he faces the Philippine pressers for the first time.

And then suddenly, he flashes a boyish smile when he was asked about being dubbed as "Asia's Ryan Gosling."

While he says he's flattered with what is obviously a compliment, having been compared with a successful Hollywood star, Seo Joong adds that he hopes to establish a name for himself as well.

By this time, Seo Joon finally warms up and establishes connection to the crowd.

He even goes as far as saying that he's interested in doing an acting project here in the Philippines if the opportunity comes up.

"I have thought of going on a tour, sightseeing, or something like that.
"But more than that, I think the general vibe I get is this a country where acting is a craft that really doesn't need language.

"You can cross barriers with a craft like acting. So more than leisurely activities, he thought na, 'Oh, this would be a good place for me to come back.'"

Waaa! That would be a perfect treat to his Pinoy fans. Can you think of anyone who'd make a good leading lady for him?

To date, Seo Joon says he is filming an unnamed project where his role depicts from a high school student up to when his character grows up to be 35 years old.

He goes on to describe his role as someone who's "hard on the outside" but is eventually seen as a warm-hearted person as the story unfolds.

This, he says, is keeping him busy until the beginning of 2020.

Hm, it sounds like his polished-but-adorable character in What's Wrong With Secretary Kim?

At the same time, he hints at his role "struggling with getting jobs" and he hopes that the youth today going through a similar situation would find inspiration in the project.

As the presscon wraps up, Seo Joon leaves everyone excited with what's in store for his own fan meet for Bench that is happening in MOA Arena today.

Here's to wishing that after this visit, he does come back here in Manila for another collaborative project very soon.

For now, I just might choose between rehashing episodes of Fight For My Way or Something In The Rain to see more of the equally lovable Seo Joon and Hae In.