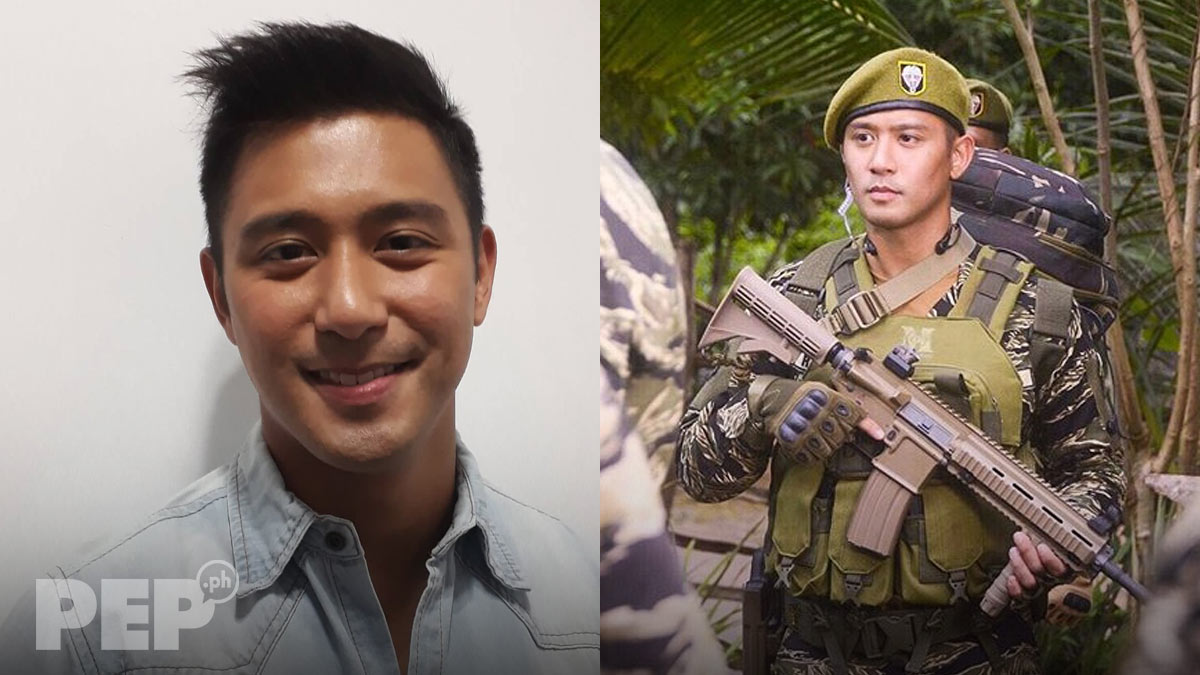 Rocco Nacino used to play the brother-in-law of Jasmine Curtis's character in Pamilya Roces. In their new teleserye Descendants of the Sun (DOTS), Rocco is cast as Jasmine's lover.
PHOTO/S: Jocelyn Dimaculangan (Rocco)

Rocco Nacino expressed excitement for having the complete cast in the upcoming Philippine remake of the hit Korean TV drama, Descendants of the Sun (DOTS).

The 32-year-old actor talked to PEP.ph a few hours before GMA-7 made the big announcement last October 3 that Jennylyn Mercado would be playing the female lead role.

“I’m just excited to see how everyone will blend in together,” said Rocco.

Descendants of the Sun is a military-romance drama that first aired in South Korea from February to April 2016, and later aired in other countries, including the Philippines through the Kapuso network.

In late 2016, GMA-7 announced that it had bought the rights to make a Philippine version.

In April 2019, Dingdong Dantes was confirmed to be playing the male lead role of Captain Lucas Manalo. Three months after, Rocco Nacino and Jasmine Curtis-Smith were tapped to take on the roles of lovers Sgt. Diego Ramos and Moira Defensor.

Rocco revealed that he watched the original Korean production twice, and still watches it for reference.

He also underwent intensive military training along with Dingdong and the rest of the soldiers in the cast. Together, they make up the Alpha Team.

“Mahirap talaga” was how Rocco described the training that essentially crammed a two-year course into just two days of hard work at Fort Magsaysay in Nueva Ecija.

“But it was an experience. Suwerte kami kasi hindi naman lahat nakaka-experience ng gano’n. We had to run for 10 kilometers, may buhat na 21 kilos na backpack.

“We had to do certain exercises, nag-a-ambush kami ng ano… Maraming exercises and drills. That was part of it. I mean, kaya hanga kami sa soldiers natin what they do for our country.”

Rocco enjoyed the training so much that he decided to enlist as a reservist to the Philippine Navy. Last October 5, he performed his first duty as a reservist by giving a talk to the first-year students of De La Salle University in Manila.

“To enlighten the students,” he told PEP.ph on the purpose of the talk. “So ’yon talaga ang magiging role as a citizen from this kind of job to being a reservist. Para mag-inspire. Not to manipulate, but to inspire.”

Rocco acknowledged that the special military training helped him and his co-stars make Alpha Team a real unit.

Speaking of chemistry, it was a big factor for the Descendants of the Sun to captivate the hearts of drama fans worldwide.

While the two sets of lovers provided the kilig, the two male leads supplied the humor and mischief.

Rocco noted that he and his leading lady, Jasmine Curtis-Smith, didn’t have a hard time getting comfortable with each other as they’ve worked together in the drama series Pamilya Roces, which ran from October to December in 2018.

“So doon, brother-in-law ako. So may transition lang sa… Trabaho namin to get out of the character to move on the next project.

The first test of their chemistry came when Rocco and Jasmine filmed their first scene together, which was also the first time their characters met again after a long time.

“Pero ayoko i-eksakto. May instructions din kami to do it a way na mapapahanga ’yong mga manonood natin. It can be the same way na kiligin no’ng pinapanood nila o mas kiligin pa. I like what Jasmine did.”

Rocco only has good words for Dingdong Dantes, too.

As for the way GMA-7 is adapting the Korean drama for the local audience, Rocco disclosed that Filipino traditions were incorporated into the story, such as those touching on family values.

“But everything under the guidance of the consultants, people from Korea. Alam naman nila. Everything with the approval of the Koreans. Maganda. Lahat nagtu-tulong-tulong.”

Rocco is also excited to be playing the role originated by Korean actor Jin Goo, whom he calls “twin brother” in his June 21 post on Instagram.

In 2016, the Filipino-dubbed version of DOTS was airing on GMA-7 after Encantadia, the fantasy series co-starring Rocco. Back then, a lot of viewers took note that he evinced a strong resemblance with Jin Goo.

“Hello, twin brother @actor_jingoo. I will do my best to give justice to Wolf/Sgt. Seo Dae Young/Sgt. Diego and portray it as well as you did. Salute!”