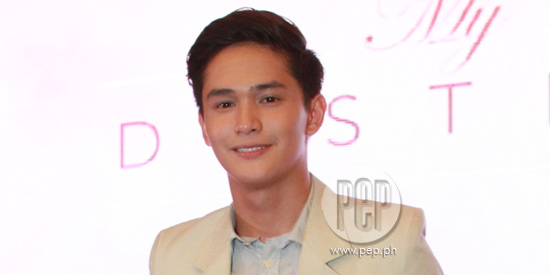 Ruru Madrid is one of the lead stars of Above the Clouds, an indie film that will compete in the 2014 Tokyo International Film Festival.

Ruru Madrid and Miguel Tanfelix, two young teen actors from GMA-7, are set to star in this weekend's Magpakailanman episode.

Ruru, fresh from a weeklong successful run on the mini-series Seasons of Love and the primetime teleserye My Destiny, shares that this episode is going to showcase him and Miguel in a way that viewers have never seen before.

Titled Kalakal Boys: The Cedric Macdon and Joven Santos story, this episode pits Ruru against Miguel Tanfelix in a moving story of adoptive siblings that addresses the age-old question: whose love is stronger, the one who gave birth to you but left you or the one who nurtured you even if you are not of her blood?

PEP asked the GMA Artist Center talent what it was like working with former child star Miguel Tanfelix who is now a certified teen leading man.

How does he use the passion Miguel has for his work in his own work?

Direk Maryo is no stranger to the 16-year old actor, having directed him in the 2013 indie film Bamboo Flowers.

Ruru portrays the role of Cedric, an orphan who rebels against his adoptive mother played by Celia Rodriguez.

He says that parents who choose to adopt and take care of children not their own deserve respect, all the more because, "yung iba, hinahayaan na lang, mamamatay na lang, so eto hindi, e, inalagaan ka, kinupkop ka bilang isang anak."

In this episode, Cedric gets adopted by Celia Rodriguez's character Manay at a time in her life when her own children have all grown up and she is left all alone. Cedric, whose biological mom Sheila is played by Maybelyn Dela Cruz, gives him up because her husband wants to kill him.

Ruru is proud of the hard work he and Miguel and the cast of Magpakailanman have poured into this project, especially because it's heavy drama work for him and Miguel. He quickly adds, "makikita dito na magka-clash din kami."

ON INDIE FILM ABOVE THE CLOUDS. Right now, Ruru is getting ready to promote his indie film Above the Clouds in the international film circuit starting with Japan, then Singapore and next year in Europe.

Ruru is slated to attend the world premiere of Above the Clouds
at the Tokyo International Film Festival in Japan.

Above the Clouds is competing in the Asian Future section of the 27th Tokyo International Film Festival. Ruru is expected to attend the event that is ongoing until October 31.

Ruru is cast as Andy, a young boy whose parents died because of a great flood. He is forced to live with his estranged grandfather (played by Pepe Smith) in the cold northern parts of the Philippines.

Inspired by photos of Andy's parents hiking up a beautiful mountain, the grandfather takes his grandson to this place against his will. As they trek together, tensions rise between the two but they eventually come to terms with their grief.

Above the Clouds, which was shot in Mt. Pulag, is directed by Pepe Diokno.


With all these blessings coming his way, Ruru is wisely investing what he is earning for the future, and even if "kaka-one year ko pa lang sa showbiz, yung house namin, rent to own, then nagka-kotse na ako, condo, siguro para sa akin, pag hindi ako doon nakatira, pwede kong paupahan."