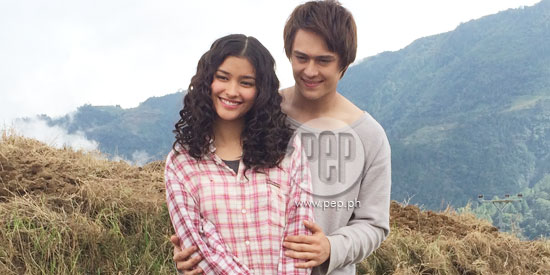 The new teamup of Enrique Gil and Liza Soberano should not be compared to current popular loveteam Kathryn Bernardo and Daniel Padilla, says director Cathy Garcia-Molina.

The blockbuster movie director—who directed Kathniel in Got to Believe thatbecame a hit television series—says the new loveteam in her upcoming soap Forevermore has something different to offer.

Through this new romantic-comedy series, Cathy said, she would be introducing Liza Soberano to the audience properly. Forevermore is slated to air weeknights starting Monday, October 27, on ABS-CBN Primetime Bida.

Liza was included in Got to Believe as a third party to the lovestruck characters of Joaquin (Daniel) and Chichay (Kathryn).

She also added that during G2B, she saw Liza as a potential actor.

In the same vein, Direk Cathy also wants to re-introduce Enrique to viewers of Forevermore.

“Si Daniel kasi is parang bad boy, siya wala. So si Enrique, he can be anybody, he can play any role kaya masaya siyang laruin.”

PLOT. Forevermore is a unique tale about first love that blossomed between two different people—the rebellious and irresponsible unico hijo of a hotel magnate, Xander (Enrique), and the feisty and hardworking Agnes (Liza) who is tagged as the Strawberry Jam Queen of La Trinidad, Benguet.

Xander and Agnes’ extraordinary relationship starts after an intoxicated Xander crash lands his parachute into a strawberry truck.

To teach him a lesson, his parents made him pay for the damages he caused by making him work at the strawberry farm under the guidance of Agnes and other strawberry farmers.