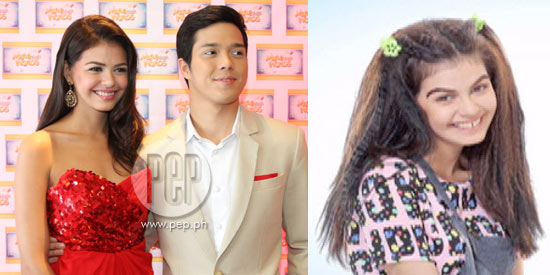 The young actress revealed that through this new program, their avid fans will see a different Elmo Magalona, whom she admires for being naturally funny.

Janine admitted that she feels pressured about her second teamup with boyfriend Elmo in More Than Words.

For Janine, it helped that their director, Andoy Ranay, told them to loosen up a bit for this show. 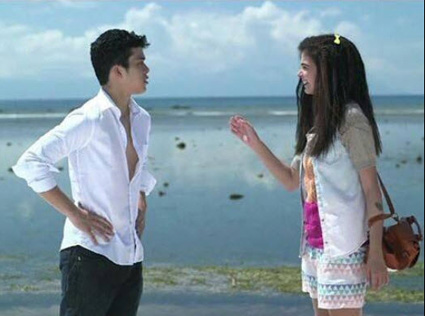 Elmo Magalona as Hiro and Janine Gutierrez as Ikay

PLOT. In More Than Words, Janine Gutierrez is cast as Ikay, a girl taunted as a weirdo at school because of her looks--she has thick eyebrows, frizzy hair and buck teeth. She is also constantly daydreaming and spacing out most of the time. Ikay finds solace in writing online fiction, creating the character of Katy Perez in the fictional story Diary of a Queen Bee.

Unlike Ikay, Katy is a cool, popular girl adored at Southvlle Academy.

One morning, Ikay is surprised when she sees a boy washed ashore. It turns out he is exactly the guy she pictured in her blog entry.

Hiro finds himself in an unfamiliar place after figuring in an accident the night he rebelled against his widowed mom. He loses his memory, starts a new life, and eventually falls in love with Ikay.

More Than Words will also re-introduce the popular loveteam in the '80s, Rey “PJ” Abellana and Leni Santos. They will portray the characters of Emil and Rose, respectively, who will give shelter to Hiro.

Emil and Rose's relationship turned sour after their only child died many years ago. With the arrival of Hiro, they will find their way back to each other. Taking care of Hiro--the son they wished they had--will serve to mend their rocky relationship.