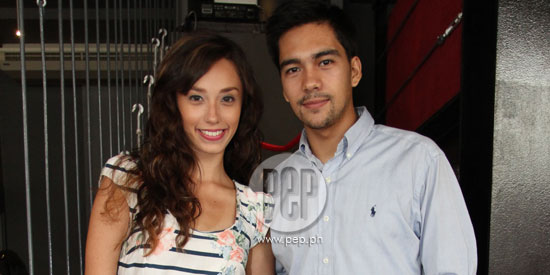 
Matthew Edwards and Phoebe Walkers, the tandem dubbed as the Dating Couple Team, learned this the hard way.

The couple reached the finish line first in two of the past three legs of The Amazing Race PH. This proves to be a great advantage for them since they have a headstart in the next leg.

However, Phoebe said that it's not the challenges that make her feel stressed in each leg.

“Nai-stress ako sa psychological warfare during the race kaysa sa challenges. Kasi, knowing that people seem to hate you and they wish you ill, doon ako stressed,” she said during a short interview with PEP.ph (Philippine Entertainment Portal) and other reporters last Wednesday, October 29.

Phoebe was talking about being voted by the remaining eight teams in the Yield marker in the current leg.

Being Yielded means they would then turn over an hourglass and wait for the sand to drain before they could continue to the Route Marker.

Phoebe and Matt think this is a result of what the latter did during the third leg of the race. He gave the answers to the MacArthur challenge to Team Juan Direction (composed of Charlie Sutcliffe and Daniel Marsh) who were eliminated at the third pit stop.

The two believe that the race helped them strengthen their relationship.


Will the dating couple, Phoebe and Matt, continue to lead in the fourth leg of the race? Find out on the second season of The Amazing Race Philippines airing daily at 9 p.m. on TV5.

The dating couple is followed closely by Jet and Yna Cruz of Team Magkapatid; and Vincent Yu and Ed Manungan of Team Nerds, who were able to overtake third leg second-place.

Team Chefs Eji Estillore and Roch Hernandez are now in 4th place; while 8th placer, Team Blondies, Tina and Avy Wells, advanced to the 5th slot. They have dislodged the Team Mag-Ama AJ and Jody Saliba, who dropped down to the 6th spot.