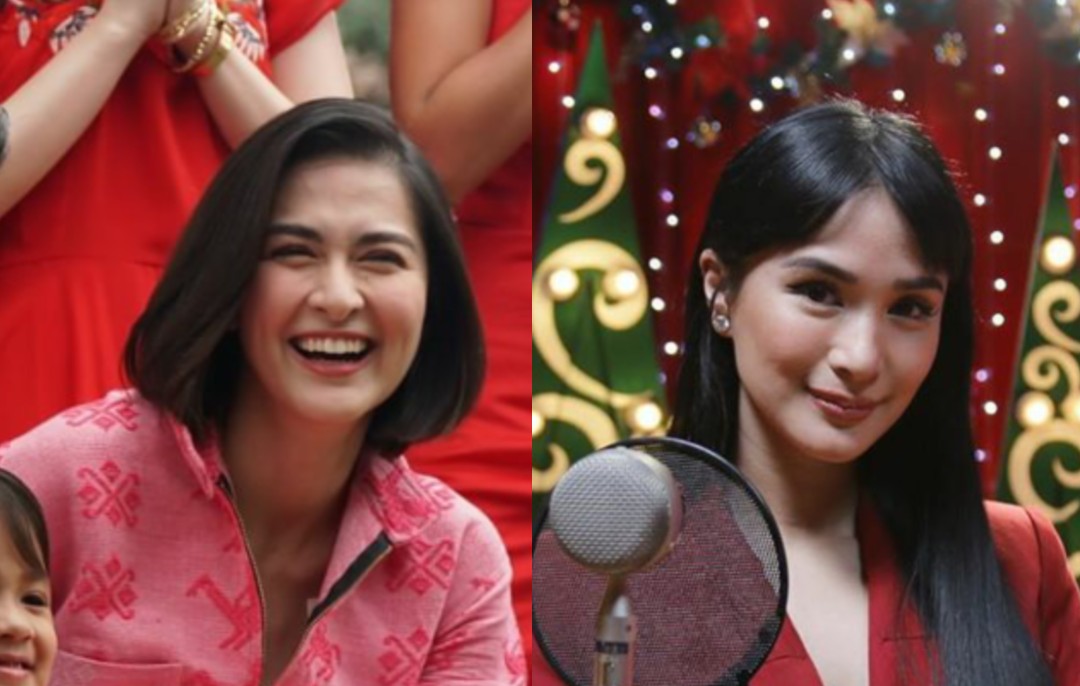 Every year, GMA-7 showcases its heart through its Christmas Station ID. 2019 is no different.

After this inspiration, the Christmas ID started showcasing stories of everyday Filipinos who had touched the hearts of Kapuso viewers throughout the year. Kapuso celebrities were also shown to be sharing gifts with these people.

The first story was about Cristina Argarin, a 55-year-old woman who carries her adult son to school. The admirable mother from Antipolo had to conduct this regular sacrifice because her son, Juan Carlos, had been paralyzed due to a rare illness. Her story was featured in Kapuso Mo, Jessica Soho last April.

Nanay Cristina and and her 22-year-old son’s day starts at the break of dawn. She helps him prepare for school, then carries him to his former Grade 10 classroom. Nanay Cristina also had to be present in schol not just to take him home but also to carry him around during breaks, and when he had to go to the bathroom.

While Nanay Cristina loved her son, she lamented that she always had a hard time because her son is now 30 kilos. Her son’s school is also not suited for the disabled; the lack of wheelchair access and elevators forced her to carry him up several stairs each day.

Another story was about children in Tondo who work odd jobs to feed their families. This was featured in GMA News TV’s Brigada last October.

The children were Dan Lloyd Garcia and MacMac Serrano. The two 12-year-olds knew that a lot of vegetables get wasted by the vendors in Divisoria. Many of these goods end up on the streets, so he and his friend roam around the market at night to gather them. He would then lay them out on the sidewalk where it could be sold in the morning.

The two stopped schooling because of poverty, so they chose to help their family instead. Despite selling food, the two still endured stretches of hours when they went hungry. They could not spend what they earned because they had to give these to their families.

There was also the story of a poor six-year-old named Ineng Boridas, who became popular when she appeared in Wowowin. Her story was featured in Kapuso Mo, Jessica Soho last August.

Viewers were touched by Ineng’s story. Because of her family’s situation, she regularly went to school even without eating breakfast in the morning and even without any baon. Her most fervent wish was to have a working television in her home, because she had to go to the neighbors to watch her favorite shows.

When the Bulacan-based toddler heard that Wowowin was looking for young contestants for one of its segments, Ineng begged her parents, Nestor and Winnie, to let her audition. She wanted to help her family have a stable life by competing in "Willie of Fortune," where she had a chance to win the Mega Jackpot, a package that contained a new car, house-and-lot and one million pesos.

When Ineng finally got on the show, she charmed the host Willie Revillame and the audience with her quick wit. She did not win the jackpot but she took home P41,000 pesos, which her family used to pay off loans, buy food and medicines, and finally fix the TV in their house.

The other stories included in the Christmas station ID were about a disabled father, a son who is proud about his father who works as a basurero, a child that sells tinapa and survivors of the recent earthquake.

The song has a familiar melody so it is easy to sing to. It’s production includes sounds of Christmas, like bells and chime trees, so it is very apt for the season.

Of course, it wouldn’t be a Christmas station ID if it did not showcase the network’s roster of celebrities. The Kapuso stars were shown either presenting gifts to the people featured in the stories, or bonding with their castmates in their current shows.

The cast of The Gift were shown together. They were Alden Richards, Mikee Quintos, Rochelle Pangilinan, Mikoy Morales, and Martin del Rosario.

The cast of Beautiful Justice were also in a group. They were Yasmien Kurdi, Gabbi Garcia, Derrick Monasterio and Gil Cuerva.

PEPsters, what can you say about the 2019 GMA-7 Christmas station ID?