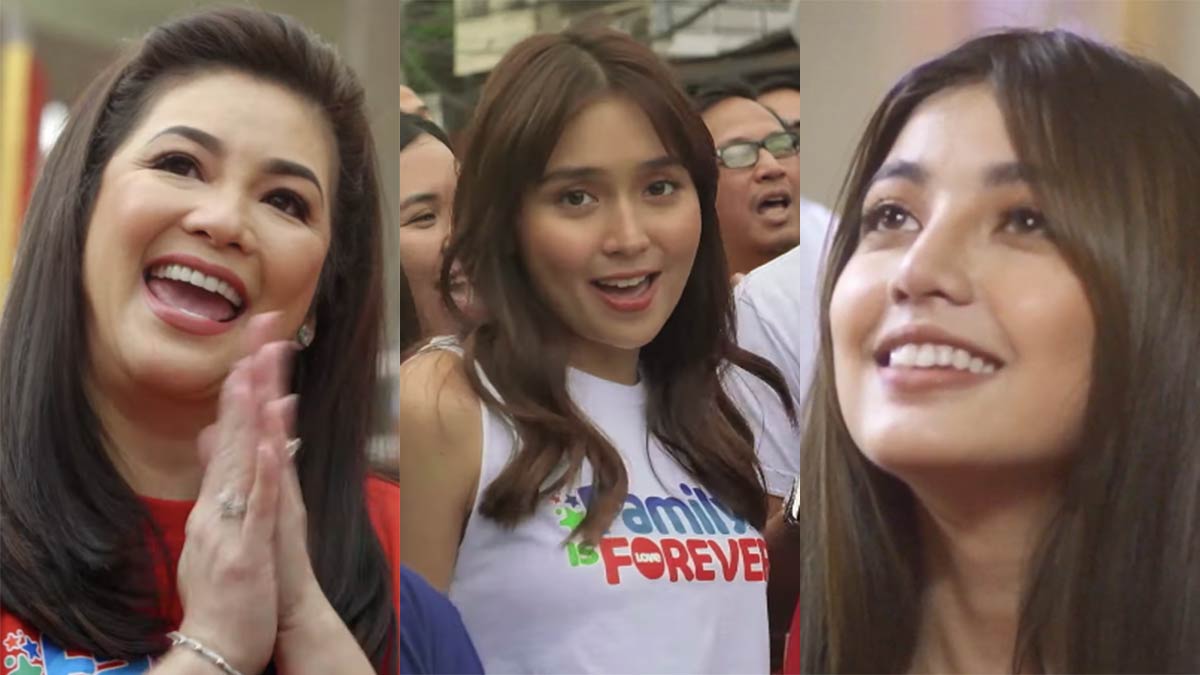 PEPsters, what can you say about the 2019 ABS-CBN Christmas station ID "Family is Forever?"
PHOTO/S: ABS-CBN

ABS-CBN brings loyal Kapamilya viewers on a trip down memory lane through its 2019 Christmas station ID.

The Kapamilya station's 2019 Christmas ID also features old news footage capturing how the Filipino spirit has remained intact despite the onslaught of super typhoons Ondoy in 2009 and Yolanda in 2013.

The Voice Kids season four coaches Sarah Geronimo, Bamboo, and Lea Salonga, as well as the grand finalists, are next heard singing the "Family is Love" song, which goes by the lyrics, "Pinag-isa tayo ng Diyos at pag-ibig, may iisang puso at iisang tinig. Forever, forever—family is forever."

The next part shows the opening clip of ABS-CBN's Christmas station ID of 2009. Titled "Bro, Ikaw ang Star ng Pasko," this station ID shows parols carried by a little boy walking along a muddy path in the aftermath of typhoon Ondoy. 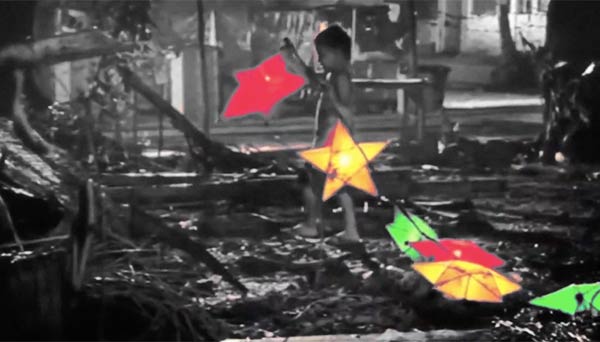 The video switches to a now grown-up Zaijian Jaranilla holding a parol. Zaijian was one of the main stars featured ten years ago, in the 2009 ABS-CBN Christmas station ID. He was then the lead star of the Kapamilya network's top-rating series, May Bukas Pa, which popularized the use of "Bro" as a way of addressing God. 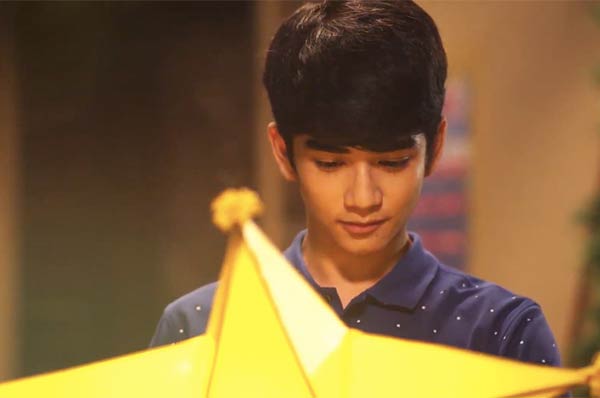 Add to this, the 2019 Christmas station ID features ordinary people also singing the "Star ng Pasko" song, including fishermen from Baseco, farmers from Nueva Ecija, doctors and nurses from Taguig, call center agents from Pasig, and members of the Philippine navy.

Pinoys from Cebu and Davao, shoemakers from Marikina, and priests and seminarians from Pasig are likewise shown singing the "Star ng Pasko" song, which is mixed with the lyrics "Forever, forever—family is forever."

A woman from Tahanang Walang Hagdan and a family of three also sing lyrics picked up from the 2015 ABS-CBN Christmas station ID "Thank You For The Love."

Construction workers from Rizal, stewardesses and passengers from an airplane, Filipinos from Hong Kong and Canada, and a teacher from Tiaong Elementary School in Guiguinto, Bulacan, are next shown singing the 2017 ABS-CBN Christmas station ID theme song, "Just Love."

The station ID also shows the repairs being done to Baclayon Church in Bohol after it was destroyed during the 2013 earthquake. Viewers also get a glimpse of the M/V Eva Jocelyn ship that became typhoon Yolanda's tourism symbol.

Villagers from Bohol and Tacloban, soldiers from Zambaonga, Ondoy survivors from Marikina join in singing the "Family is Love" theme.

The part that follows features ABS-CBN stars reuniting with regular folk who were formerly featured in past station IDs.

One of them is a young girl who survived typhoon Yolanda in 2013. She was featured in the Kapamilya station ID that same year.

Nanay Baby Cerdena, who was teary-eyed when Kim Chiu and Xian Lim surprised her with a visit in the 2013 Christmas station ID, is again surprised by Kim in this year's video. 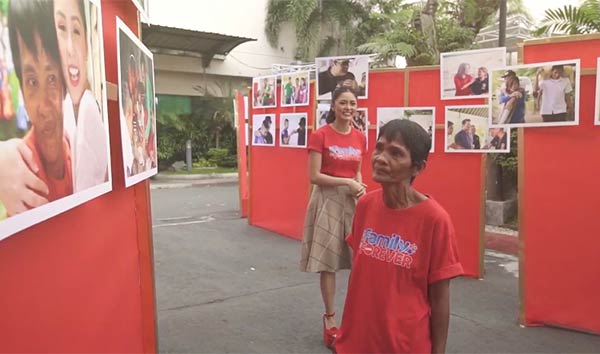 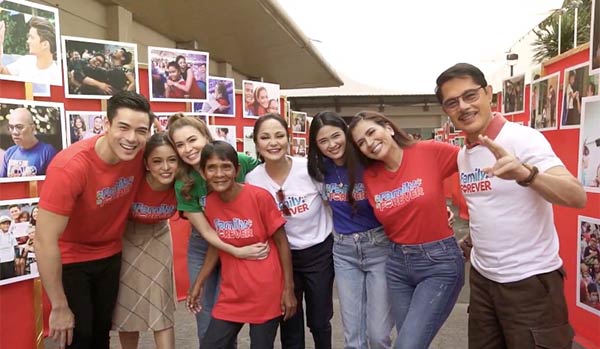 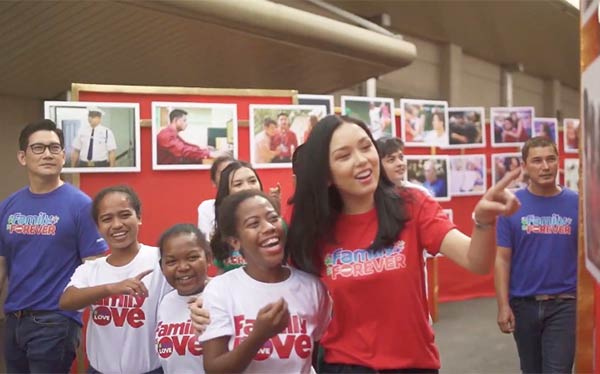 In the 2016 ABS-CBN Christmas station ID, Roy Lawagan, a lawyer from the Mountain Province, was featured with Magpahanggang Wakas stars Jericho Rosales and Arci Munoz.

Arci is also part of Pamilya Ko, but she is not in the station ID. 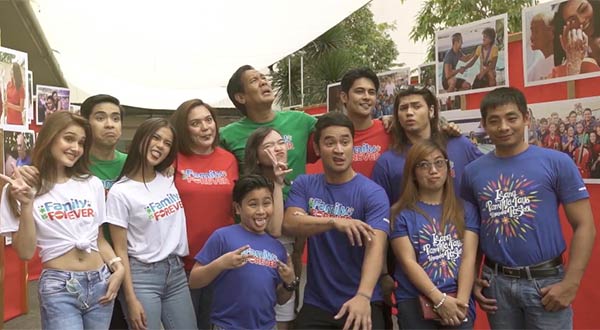 Teresita was a contestant of "Tawag ng Tanghalan," where she got a hug from Vice. 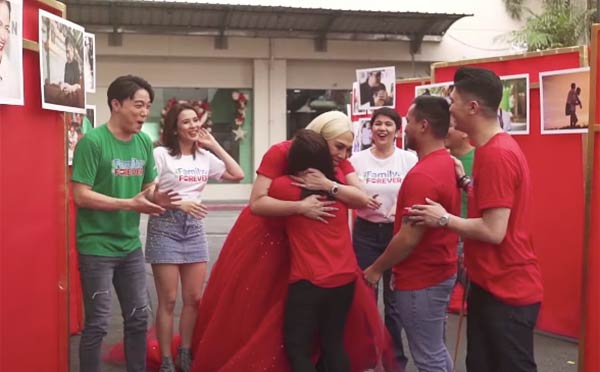 Rated K host Korina Sanchez has a chat with Amy Mesias, who was likewise featured in the 65 Years ng Kwentong Kapamilya station ID. 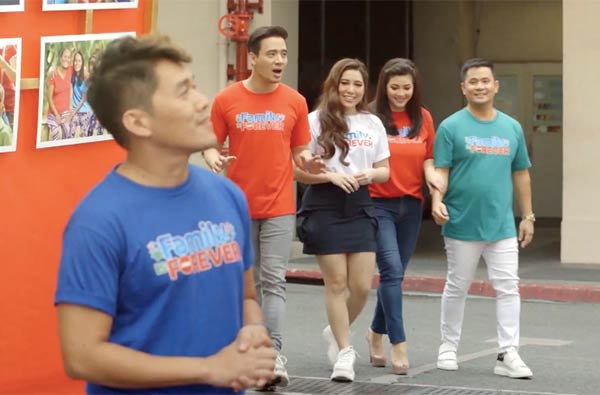 Julius Babao and Karen Davila mingle again with the Response and Action Force Team volunteers of Las Pinas City. They were together for the 2016 station ID. 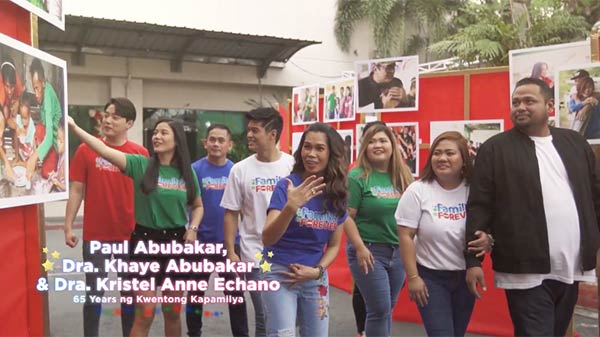 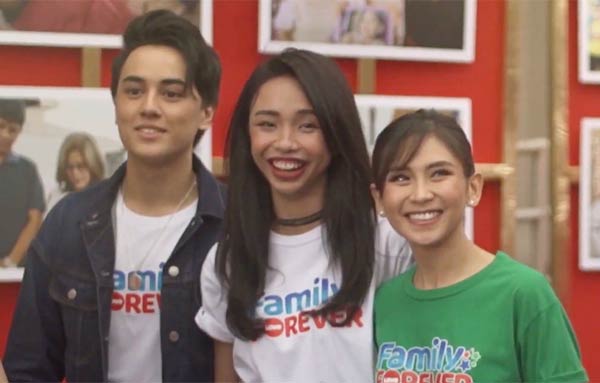 Liza Soberano and Enrique Gil, who will top-bill the upcoming series Make It With You, spend time with Jan Aure Gascon, who was featured in the 65 Years ng Kwentong Kapamilya station ID. 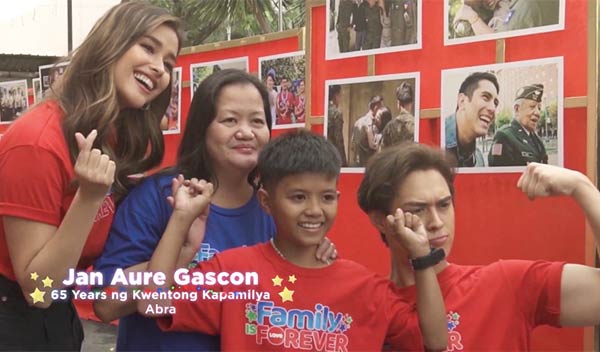 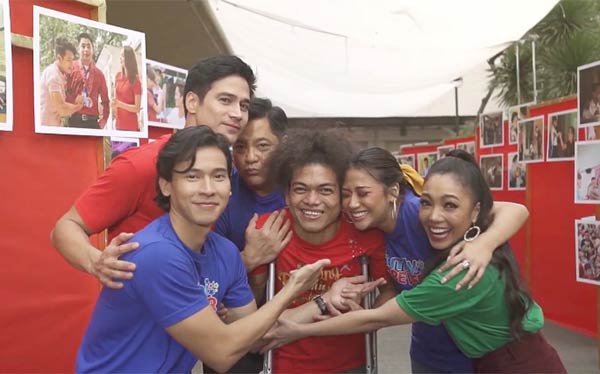 Kathryn Bernardo and Daniel Padilla make merry with people of the Noordhoff Craniofacial Foundation Philippines. The institution was featured in the 2016 ABS-CBN Christmas station ID. 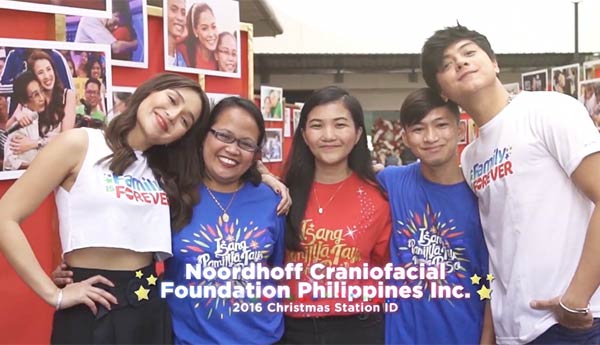 The General's Daughter cast members Arjo Atayde, Ryza Cenon, and Maricel Soriano meet up with educators from Philippine Institute of the Deaf, who were part of the 2014 ABS-CBN Christmas station ID. 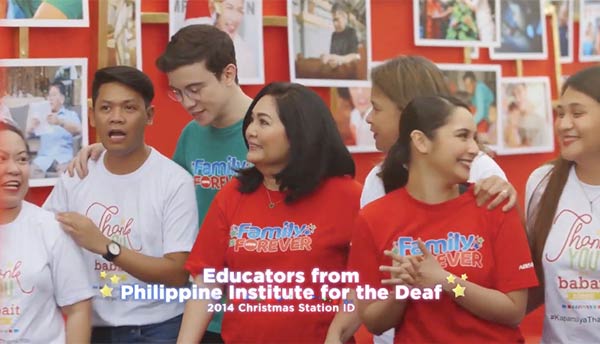 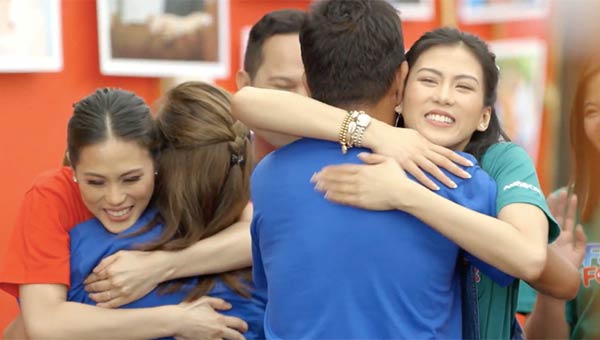 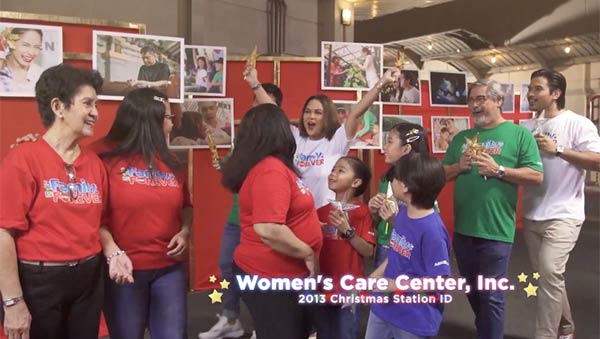 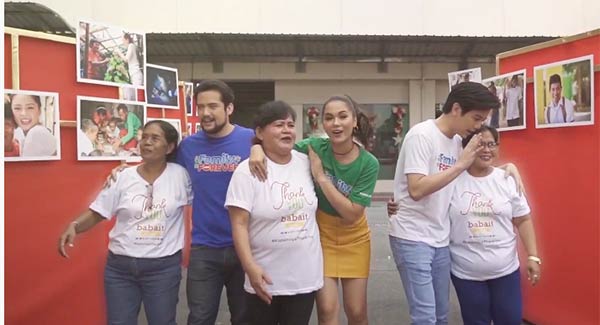 Your Moment hosts Vhong Navarro and Luis Manzano and judges Nadine Lustre and Billy Crawford make time with other volunteers from the same institution. 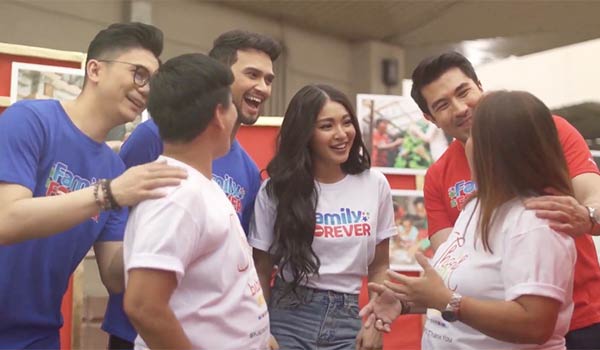 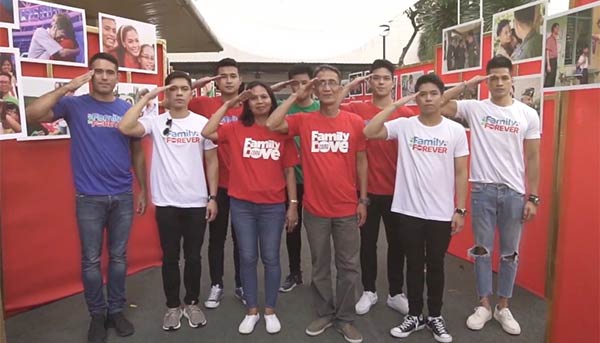 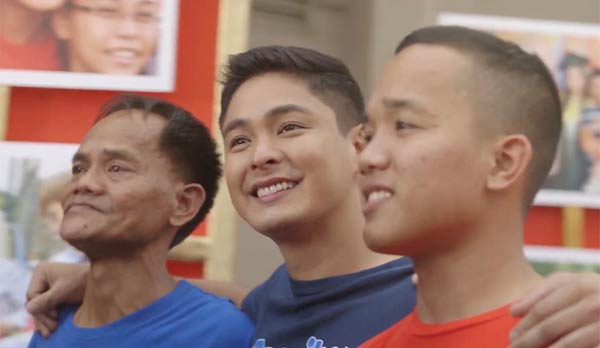 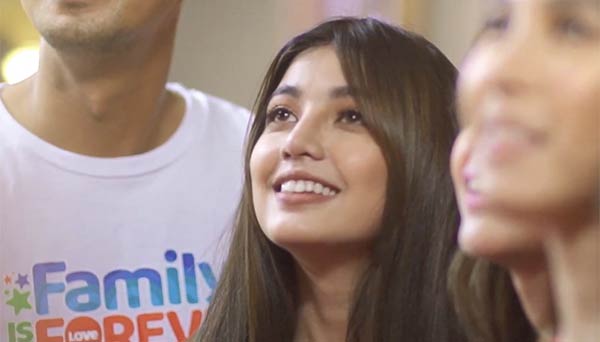 PEPsters, what do you have to say about the 2019 ABS-CBN Christmas Station ID?