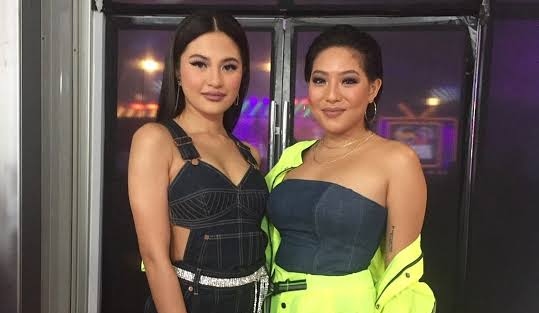 Julie Anne San Jose (left) and Rita Daniela say they did not have ill feelings towards each other after competing in the GMA-7 singing competition Popstar Kids.

Rita Daniela and Julie Anne San Jose talked about their experience competing against each other as young singers in Popstar Kids.

These two Kapuso singers may be close friends now but they were once onscreen rivals. Popstar Kids is a singing contest for kids that aired in 2005 in QTV, a sister network of GMA-7.

This discussion came up because Rita and Julie Anne are now co-hosts in The Clash, a modern singing competition in GMA-7 that airs on the weekends.

Rita, who was 10 years old at the time, was the grand champion of Popstar Kids while the 12-year-old Julie Anne placed third.

While the competition looked fierce on TV, the two revealed that they did not have ill will against each other. They thought the contest was just a game.

The two won exclusive contracts with GMA-7, and were even in a pop group called Sugarpop. And yet the two reached fame through different paths.

Julie Anne became a lead actress early in her career. She was paired with former screen partner Elmo Magalona, and they starred in several drama series and even a movie.

Rita had to play supporting roles for many years. A 2011 interview with PEP.ph belied assumptions that she felt bitterness for the reversal of fortune between her and Julie Anne. She said she might be the winner of Popstar Kids but that doesn’t mean she should feel bitterness against her peer.

She also believed then that she would have her time in the spotlight.

“I believe that we all have our time to shine. Siguro nga noong manalo ako sa Popstar Kids, that was my moment to shine. It opened doors for me and maraming magagandang nangyari sa akin. Wala akong mairereklamo,” explained Rita.

And that time came seven years later when Rita she struck gold portraying a sassy prostitute in 2018’s My Special Tatay.

Rita now stars in One of the Baes, a primetime comedy series, and co-hosts The Clash with Julie Anne.