Most hilarious tweets about Miss Universe 2019 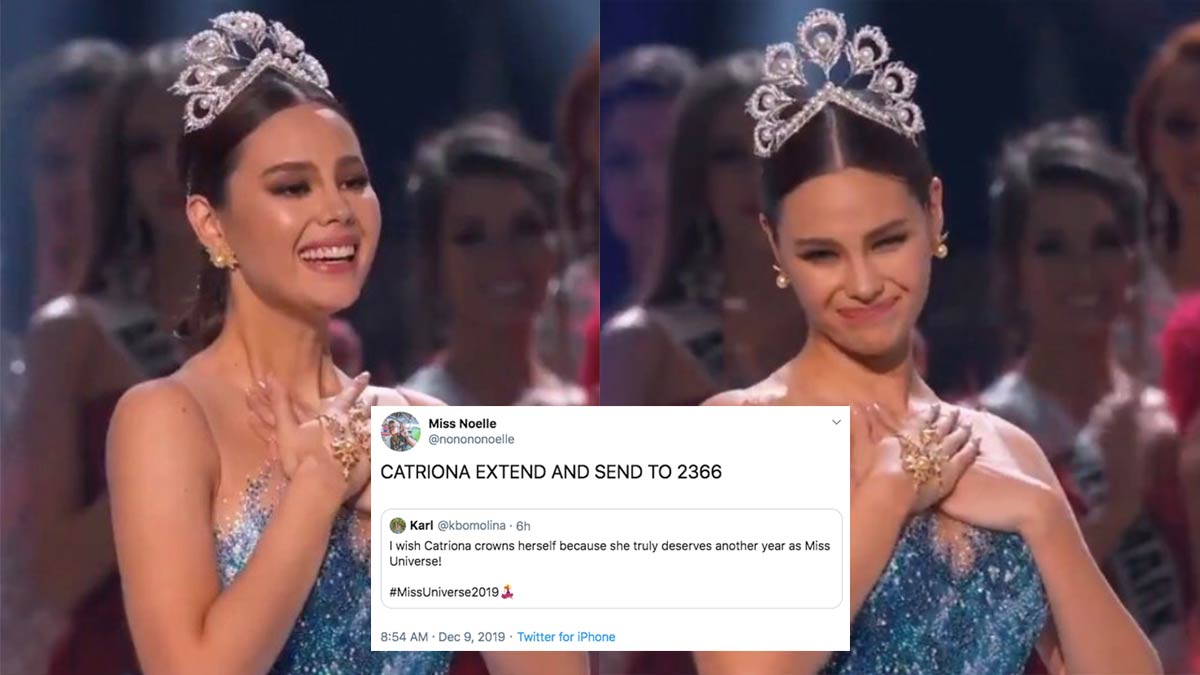 Filipinos used social media to comment on the events that transpired during the Miss Universe 2019 pageant today, December 9, 2019.

Filipinos were then saddened when Gazini was not announced as part of the Top 10 finalists.

It was when he announced Miss Philippines as the Best National Costume winner when Miss Malaysia Shweta Sekhon was on stage.

Hours later, the Miss Universe organization announced that Steve was right that Gazini won the award.

Filipinos also had emotional reactions when Catriona Gray did her final walk as Miss Universe.

Netizens expressed their reactions through witty and hilarious Twitter posts that captured the range of Filipinos's emotions and showed how invested they are in the Miss Universe pageant!

Filipinos were shocked yet hopeful when Steve Harvey did not call the Philippines as part of the five Asia Pacific's candidates in the Top 20 semi-finalists.

One netizen used a screenshot from the movie Himala, wherein Nora Aunor's character was trying to catch her breath after getting shot.

Another netizen also tweeted a "consider-yourself-warned" GIF addressed to the Miss Universe organization!

Remember the reactions of Ken Chan and Rita Daniela when a contestant of The Clash failed to hit her whistle note?

One netizen had the same reaction when Steve did not call the Philippine candidate.

Some were simply shocked by what happened:

But then, netizens remembered that there was a wildcard round and hoped that Gazini would still be part of the last five candidates.

Finally, Steve Harvey announced the Philippines as the first candidate part of the wildcard!

But then, the celebration mode was cut short when Gazini did not make it to the Top 10.

And the perfect reaction? Arci Munoz's cursing scene in Open:

Some netizens joked that gay hairdressers would be upset so they warned those who are planning to get a haircut. They also joked about those planning to seek Customer Service over the phone.

One netizen decided to switch off the TV, thinking that Miss Universe 2019 "used" the Philippines for high ratings!

A Twitter user also pointed out that Gazini should have used the name "Gazin-A" to follow the footsteps of Pinay Miss Universe winners Gloria Diaz, Margarita "Margie" Moran-Floirendo, Pia Wurtzbach, and Catriona Gray.

One netizen formulated a "hugot" tweet after Gazini did not make it to the Top 10.

One netizen then unearthed this photo of Gazini holding a gun!

After that gloomy moment, Filipinos were energized again, this time for Miss Universe 2018 Catriona Gray!

Some people noticed when Catriona stuttered in saying "karangalan" and found it cute!

Because everyone just can't get over Catriona's reign, Filipinos are trying to make a petition to extend her Miss Universe contract!

What if Miss Universe had a "clash" between the new titleholder and the defending champion?

Still, Filipinos are happy for Miss South Africa, who was hailed the new Miss Universe!

Remember when South Africa won Miss Universe 2017, and crowned the Philippines in 2018?

Some said that this can be a premonition that the Philippines might win the crown again in 2020!

There were other events that elicited comments from netizens.

One was when host Steve Harvey said that the Philippines won the Best National Costume, but it was Miss Malaysia who was on stage.

The screen then flashed Gazini's costume, which created more confusion among those watching on TV.

After Miss Malaysia corrected Steve, Steve explained that he just read what was shown in the teleprompter.

Apparently, it was really Gazini who won the special award, as announced by the Miss Universe organization hours later.

Of course, netizens were not happy with the incident.

Steve Harvey was also put in hot water when he cracked a cartel joke to Miss Colombia.

It was when Steve called Miss Colombia Garbiela Tafur as part of the Top 20, and even spelled out Colombia before Gabriela went on stage.

The joke was referring to his Miss Universe 2015 blunder, when he announced Ariadna Gutierrez as the winner, instead of Miss Universe-Philippines Pia Wurtzbach, who really won the pageant.

Gabriela then jokingly asked Steve, "Are you sure you read correctly? Should I go back? Tell me what to do!"

Gabriela then told him, "You're forgiven, don't worry."

Steve then replied, "You've forgiven me."

Gabriela pointed at her supporters and said, "They do!"

Steve quipped, "Yeah, they have. Not the cartel, they are not handling it the same way."

The reactions did not come from Filipinos, but most netizens considered the joke offensive.

After the pageant, Filipinos are very much excited for the Miss Universe 2020 pageant.

One netizen used a GIF from America's Next Top Model to sum up the roller coaster ride that Filipinos went through this morning because of the Miss Universe pageant!

What can you say about the 2019 Miss Universe pageant?