Raymart Santiago: “Direk Laurice [Guillen] asked us to use the most painful event in our lives..." 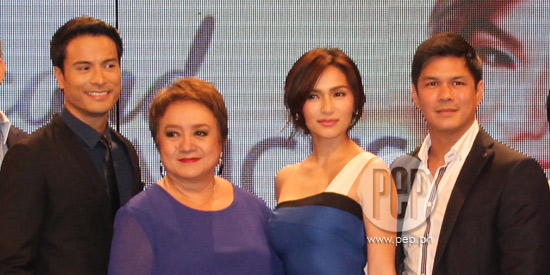 For Jennylyn Mercado and Raymart Santiago, they had to dredge up memories of their painful past in order to portray their characters in Second Chances.

Also starring Camille Prats and Rafael Rosell, this upcoming GMA-7 teleserye is under the helm of Laurice Guillen.

Fresh from winning the best actress award in the 2014 Metro Manila Film Festival for her hopeless romantic role as Tere Madlangsacay in English Only, Please, Jennylyn now steps into the role of Lyra Bermudez.

In Second Chances, the Kapuso actress portrays a wife and mother whose happy and contented life was shattered by a tragedy that took the life of her husband and son.

It is scheduled to air its pilot episode this Monday, January 12, on GMA Telebabad.

“There’s nothing more painful than losing the people you love,” says Jennylyn of her role.

“In playing Lyra, I had to dig deep into my emotions. Recalling the time when I lose my dad, Roger Mercado, in 2008.

“Daddy Roger was the man I grew up with. Even though he wasn’t my real dad, he accepted me as his own flesh and blood.

“The loss of a loved one is very painful and those feeling came back while I was playing the role of Lyra.

“It really helped me a lot and working with Direk Laurice has taught me to further search my heart and get into those emotions that I was afraid to remember again.

“It made my performance a lot better because I am much opened now with everything that happened to me, good or bad, I have embrace it for me to become a better actress and a better person.”

Raymart Santiago plays the role of Bernard Castelo, a happy family man whose life turned gray when he suddenly lose his loving wife.

“It was a difficult role for me because I have to go back and relive so many painful chapters in my life.

“Everyone knows what I have been through—it’s not easy but I have to move on and live with it.

“Direk Laurice asked us to use the most painful event in our lives and there are so many. I lost both my parents. My dad [Pablo Santiago] in 1998 and my mom [Cielito Legaspi-Santiago] in 2014.

“Not to mention what happened to my own family and it’s been two years that I’m going through pain because I don’t get to be with my kids every day.

“So there are so many emotions that I can use and they have served me well with my performance in Second Chances.”

This is Raymart’s second team-up with Jennylyn. They first teamed-up in the series Futbolilits in 2011.

“It was nice working with Raymart again. For those who didn’t know, it was Raymart who introduced me to my favorite sport now which is the triathlon.

“He has always been a good friend and a very professional actor. We have many intimate scenes in Second Chances. But it’s all work,” Jennylyn says with a smile.
Raymart says he is lucky to work with Jennylyn again.

“There have been rumors about me and Jen. But they are not true.

“Jen has always been a great friend. Even after Futbolilits wrapped up years ago, we’ve always been in touch with another.

“I am lucky to have her as a leading lady again because she just won best actress. I can say that I am working with one of this generation’s best actress.”