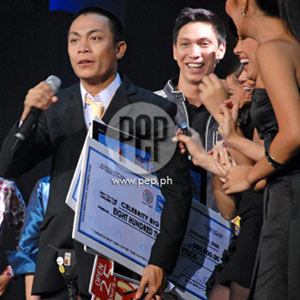 Ruben Gonzaga is cheered on by his fellow celebrity housemates as he gives his thanksgiving speech. He was hailed as the first male winner of the Pinoy Big Brother franchise during the Big Night held at the Araneta Coliseum last Saturday, January 5.


There were a few seats left unoccupied in the patron area but otherwise, all the seats of the Araneta Coliseum were filled up during the Big Night of Pinoy Big Brother Celebrity Edition 2. Last Saturday, January 5, a male winner was hailed for the first time since the Pinoy Big Brother franchise was aired in the Philippines.

Ruben Gonzaga, a comedian from Davao, bested the other celebrity housemates when he received 32.17 percent or 506,402 votes from the viewing public. As the Big Winner of PBB Celebrity Edition 2, he was given a cash prize of P2 million, a Sony Bravia, a Goodah business franchise worth P2 million, and a condominium unit from Chateau Valenzuela. His chosen charity also received a million pesos.

It was reported in PEP (Philippine Entertainment Portal) that Riza Santos's fans were upset with houseguest Mariel Rodriguez after she cursed the Fil-Canadian beauty queen inside Big Brother's house. However, it wasn't Mariel that got boos from the crowd but former celebrity housemate Gladys Guevarra who had a confrontation with Will inside the house and left the house voluntarily because she felt she did not fit in with the housemates. She was unable to attend the Big Night because she had to attend to personal matters in the United States.

On Day 84 of the reality show, the Big Four—composed of Ruben, Gaby dela Merced, Will Devaughn, and Riza Santos—remained inside the Big Brother house in Quezon City until Kuya gave them the signal to proceed to the Big Dome in Cubao. Even though Jon Avila wasn't able to join the Big Four since he was meted with a forced eviction a few days ago, his chosen charity was still able to receive a generous amount of P20,000. This amount used in the Tower of Coins task of the Big Four went to Tahanang Sta. Luisa, a haven for abused children.

The Big Four also got the chance to spend 100 seconds with special persons in their life. Riza's father, Ruel, gave inspirational words for the housemates. Will received a special phone call from his mother, Doris Dorman, from Kentucky, U.S.A, causing him to cry and tell his mom, "We're already winners."

Ruben shared his handkerchief with the weeping Will and made light of the moment by taking it back and saying, "Sa akin ‘yang panyo, bro."

Using their native dialect, the Davao housemate talked excitedly with his uncle whom he affectionately calls Papa Locloc. Ruben introduced him as the man who inspired him to be a comedian. Finally, a man with a sprained leg was ushered inside the confession room. He was actually Gaby's older brother, Jan, who looked so much like the Racing Goddess.

When the votes were finally tallied, it became apparent that the Komedyanteng Promdi had the support of the viewing public. His closest competitor, Riza Santos, got 430,135 text votes or 27.33 percent. Third Big Placer Gaby received 406,892 text votes (25.5 percent) while model-turned-actor Will Devaughn landed in fourth place with 230,509 text votes (14.65 percent).

The Big Winner emerged onstage as fireworks lit up the Big Dome and a huge star was shown in the background. Ruben jumped up and down for joy and told the crowd: "Ang pangarap ng taong bayan natupad na! Maraming salamat po!"