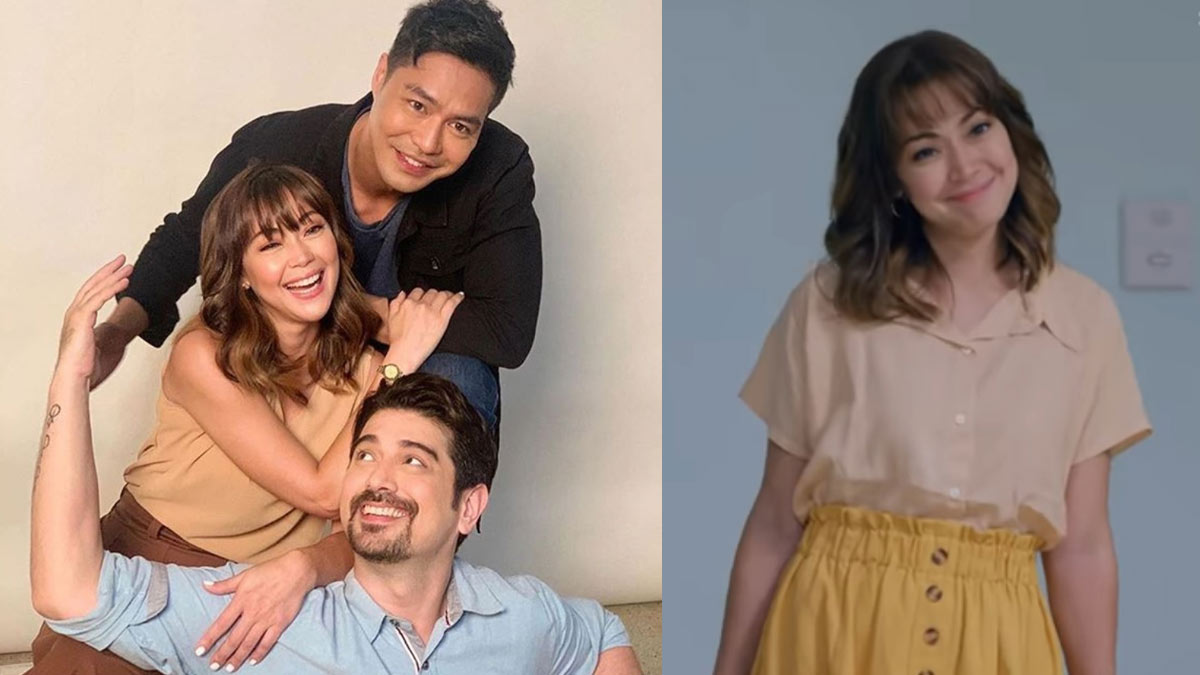 Jodi Sta. Maria serves as the producer and lead actress of the iWant series My Single Lady wherein she is paired with Zanjoe Marudo (wearing black) and Ian Veneracion.

Jodi Sta. Maria is back is back with a bang as the lead star and producer of My Single Lady, iWant’s newest series offering.

After seeing her in a succession of heavy dramas, we see her again in a bubbly and relatable character reminiscent of her stint in Be Careful with my Heart.

Chona Mae (Sta. Maria), a young single mother, ekes out a living as a makeup artist and errand girl for a small drag club where her gay friends do impersonations and occasional stand up comedies.

A true-blue daughter of misfortune, Chona was raised by a Regine Velasquez impersonator named Mama Reg.

When Mama Reg passes away, Chona is unhinged as she is thrown into uncertainty anew.

And as if her string of her misfortunes are not enough, Chona's house burns down and she crosses paths again with the father of her child, Chester (Ian Veneracion).

Overjoyed to see his son, Chester starts to reach out to Chona Mae and Red. But what if she is already is already developing feelings for the club’s hunky electrician BG (Zanjoe Marudo)?

With the help of her odd family of quirky drag queens, Chona navigates this new stormy chapter in her life stronger and wiser—well, hopefully.

As they say, once you’ve already hit rock bottom you cannot get any lower than that. Or can you?

My Single Lady comes across as a compelling enough watch because of the entertainment value.

Lumping an incredibly unlucky girl with flamboyant queens under one roof has been a tried and tested formula that is impossible to mess up.

Creating this warm, though unconventional, family onscreen plays into the innermost wishes of single mothers everywhere that they, too, will find a support system such as this.

It strongly challenges the notion that only regular families are worth keeping.

In the pilot episode at least, it’s notable that personal tragedies that may otherwise be defeating are dealt with a light hand for comic effect but does not invalidate them.

But it does suffer from laziness in storytelling at times, resorting to narrative shortcuts, but because of the liberal use of camp and kitsch in the treatment, this may well be forgiven.

As far as humor goes, it does deliver the punch expected from a trio of lively drag queens with diverse personalities.

There is perhaps no better actress to bring a character like Chona Mae to life than Jodi Sta. Maria whose range enables her to seamlessly transition from dramatic to comedic moments.

Chona Mae is a heroine every struggling single mother can strongly relate to. When she’s broken, we feel her fears. When she rejoices, we feel her hopes and we want to see her succeed. We want her to end up with the family that deserves her.

As a whole, this six-part series is guaranteed to give you the feels. Your heart only has to be big enough to contain it all.

My Single Lady is now available on the streaming app iWant. It is directed and co-written by Carlo Catu with Janina Gacosta.