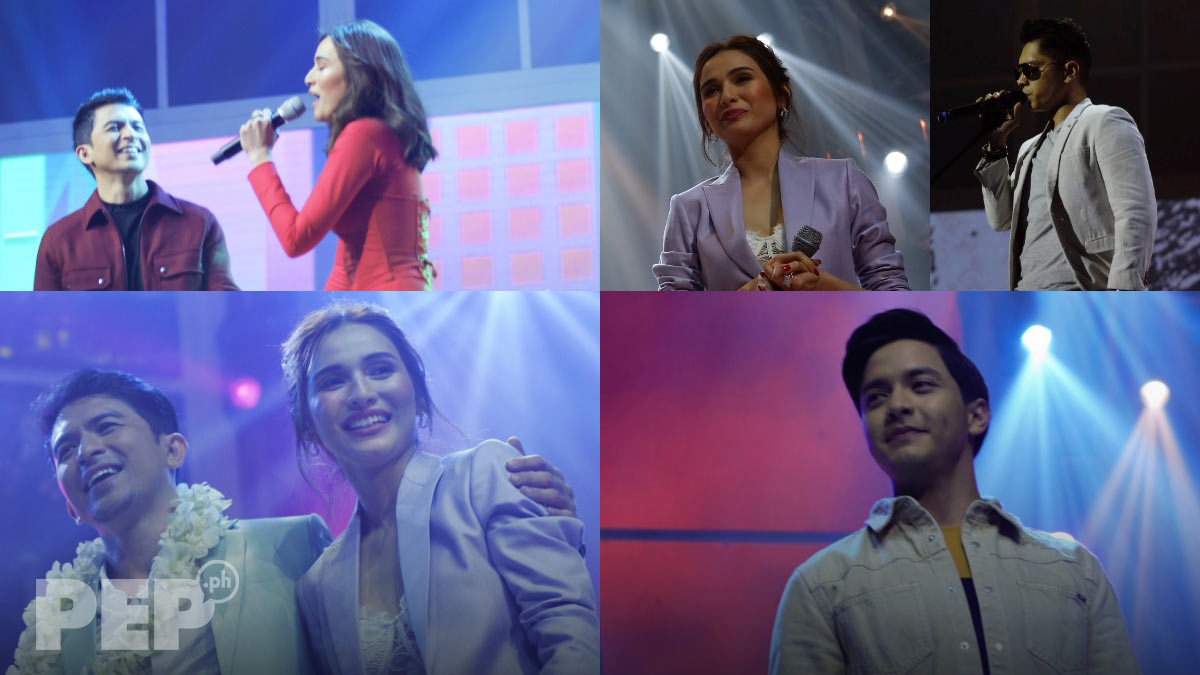 Dennis Trillo and Jennylyn Mercado get personal in their first concert together, putting on an enjoyably kilig show with their fellow GMA-7 stars, along with ABS-CBN artists, as guest performers.

Their love story is the running theme of the sold-out Valentine show, CoLove Live, which took place last February 15, at the New Frontier Theater in Cubao, Quezon City.

The show’s program flow is divided into three chapters, chronicling the time they first met and fell in love, broke up and parted ways, then reconnected and got back together.

Following this format causes a snag at the start because, instead of the expected upbeat opening number, the production goes for a medley of love songs—“It’s Sad to Belong” and “Just a Smile Away,” which are supposed to reflect where the couple is at in that stage of their lives.

Dennis and Jennylyn are off to a shaky start onstage, too, as their anxiety shows in their voices and body language.

But their stellar presence and heartfelt sincerity withstands this initial setback, and things began to pick up as they sing and dance to Donna Cruz’s delightful ditty, “Kapag Tumibok ang Puso.”

Their spiels explain that their concert is an offshoot of the music videos posted on Jennylyn’s YouTube channel, which she proudly announces now has more than 400,000 subscribers.

In these videos, collectively called “CoLove,” the couple jams with a live band, as the versatile actress is an accomplished recording and concert artist, while the award-winning actor also sings and plays the drums.

Jennylyn narrates that the room where they hold their band sessions used to be occupied by her adoptive mother, Lydia Mercado, who passed away in 2016, and she says that she felt her Mommy Lydia was “parang nakiki-jam lang sa amin.”

Thus, for the next number, their first set of guest performers—Nar Cabico, Nico Antonio, and Juan Miguel Severo—performs a medley of hits by the iconic ’90s Pinoy band, the Eraserheads.

When Jennylyn returns to the stage, she is ready to belt out Whitney Houston’s “I Will Always Love You,” but is interrupted by another guest performer, Alex Gonzaga.

The ABS-CBN TV host, actress, and vlogger, who has made a name for herself as an irrepresible comedienne, recalls how her excitement to be on the show was doused when she saw that her photo was not included in the poster.

The audience cracks up at how Alex has made a joke about the franchise-renewal dilemma faced by her home network, whose logo has the colors green, red, and blue.

In response, Jen sings a line from the station theme song of her own home network, GMA-7: “Kapuso, makulay ang buhay.”

Jen herself picks up from where she left off with the Whitney Houston chartbuster, and successfully reaches the high notes.

Alex tries to go there vocally, too, but ends up kneeling on the floor, to the great amusement of the audience.

The production wisely follows that scene-stealing comedy act with the solo number of guest artist Jay Durias, on keyboards, singing a medley of his own hit compositions, originally performed by his old band, South Border.

Concertgoers cannot help humming along with “Love of My Life,” “Ikaw Nga,” and “Kahit Kailan.”

After this, Jennylyn comes onstage to announce that Janno Gibbs cannot make it to the show as a guest performer, so she calls back her bestie, Nar Cabico.

They sing the two songs that Jennylyn had recorded with Janno: “Moments of Love” and “If I’m Not in Love with You.”

That number marks the end of Chapter 1, and the intro to Chapter 2, titled “Heartache.”

Without mentioning their big fight that hit the headlines in 2011, just a month shy of their first-year anniversary, Dennis and Jennylyn are shown on the video saying why they parted ways.

He adds: “We let our emotions get the best of us. Walang nagpapatalo, wala. Tama ba?”

“We felt we were not good for each other. It’s best for us to part ways.”

The severity of the breakup topic is then smartly made to stand in contrast to the lightness of real-life couple and comedians Jerald Napoles and Kim Molina, who gained famed in the PETA hit musical play, Rak of Aegis.

Apparently, her last line is supposed cue the guitarist to start playing the Aegis song “Luha,” but the musician doesn't start, so the singer blurts out, “Yun na po yun, Kuya!”

And so Kim begins performing, flawlessly and effortlessly, the vocally challenging tune, while exchanging banter with her boyfriend Jerald. 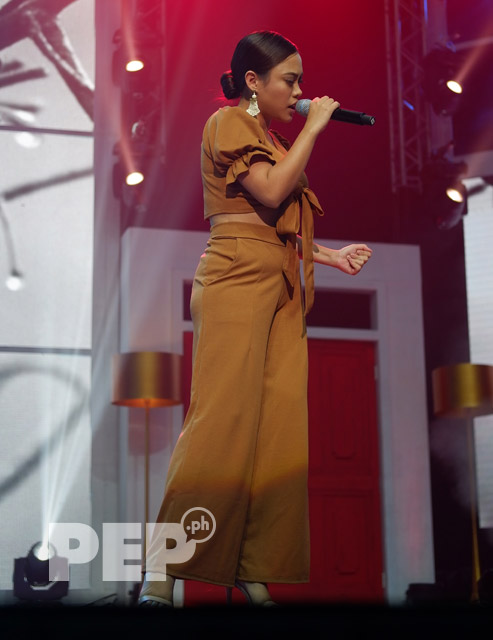 Jerald responds with "Ulan," another Aegis chartbuster, until the talented couple ends up doing a duet. 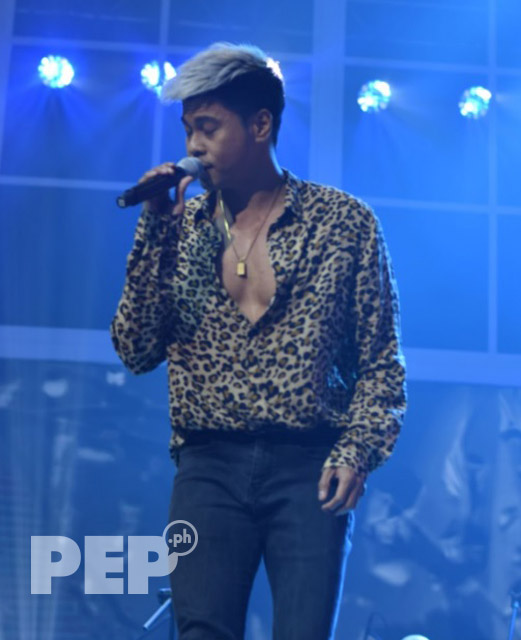 Then it’s time for Co-Love Live to get serious with more heartbreaking songs, starting with Nyoy Volante, on guitar, singing his own composition “Nasaan.”

Dennis joins him onstage, saying that “Nasaan” is one of his and girlfriend Jennylyn’s favorite songs, before he plays the drums to accompany Nyoy, on the latter's take on his and ex-girlfriend Nina’s signature hit, “Someday.”

After that number, a suave guy in dark glasses comes onstage to perform a stripped-down version of “Say My Name” by the all-girl trio, Destiny’s Child.

He turns out to be Carlo Aquino, who has the misfortune of not being introduced to the audience.

Then comes a slew of tragic love tunes from Jennylyn (“I Love You, Goodbye”), Dennis (“Let Me Be the One”), and from both of them (“Paalam Na” and “Before I Let You Go”).

Next, Juan Miguel Severo wears his heart on his sleeve onstage with spoken word poetry, as Juan Karlos Labajo and his band set up for the next number.

The Voice Kids graduate’s first hit song, “Buwan,” was released over a year ago, yet the crowd’s overwhelming and positive response to it hasn’t waned.

Juan Karlos’s instense performance and playful interaction with the audience, meantime, brings the house down.

It is a great lead-in to the third and last Chapter, titled “Second Chance.”

Dennis and Jennylyn’s real-life reconciliation was first reported in 2015, but they confirmed the good news only a year later.

At their CoLove Live concert, they shed light on what brought them back together.

Jennylyn declares, using the title of her boyfriend’s 2018 movie: “He’s my one great love.”

Dennis responds with the title of his 2018 romcom TV series: “She is the one who got away…well, almost.”

She concludes the banter, using the title of her own movie: “Hindi totoong walang forever. Kasi may forever kung gugustuhin natin.”

Although these almost sound like romantic lead-ins to a marriage proposal, a relationship milestone that their fans have been wishing for, it doesn't happen here.

Instead, the couple happily performs the Natalie Cole classic, “Starting Over Again.”

Then appears onstage the evening’s final guest performer, Alden Richards, dishing out a string of ’90s boyband hits “I Swear,” “This I Promise You,” and “As Long as You Love Me.”

Afterwards, Alden says that he’s such a fan of the couple, there was no way he could turn down the invitation to perform.

As it was also the day after the birthday of the concert director, John Prats, himself a Kapamilya actor, he was called onstage to receive his birthday cake.

Dennis and Jennylyn close the show with the song featured in the most popular video on her YouTube channel, “After All,” which to date has registered four million views.

They follow it up with another ’80s hit, “Nothing’s Gonna Stop Us Now,” and then thank their sons Calix (for Dennis) and Alex Jazz (for Jennylyn), presenters, sponsors, and all the people who came to watch.

Finally, Dennis and Jennylyn thank each other. He takes the extra step, saying "I love you" to his girlfriend, before giving her a quick kiss on the lips.