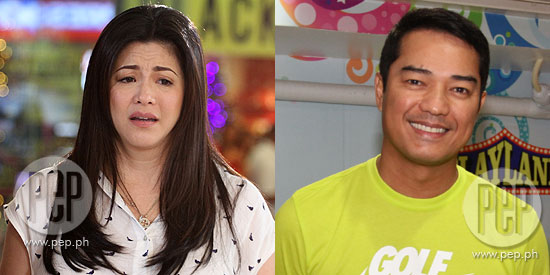 Himig ng Pasko tells the story of former high school sweethearts, Bell and Joseph, who cross paths once again after many years without any communication. Bell is an OFW who returns to her hometown to fulfill her three wishes: to become closer to her daughter, to revive the family’s parol-making business, and to rekindle an old flame.

Ariel further described his character Joseph: “I play Joseph, Regine's character's ex-boyfriend, who apparently when she comes back, still has feelings for him. We somehow reunite.”

Regine, on the other hand, plays a single mom who struggles with her difficult relationship with her daughter (played by Julie Ann San Jose).


The plot seems to be tailor-made for Regine and Ariel, who last worked together in GMA’s teleserye, Forever in My Heart, ten years ago.

Nevertheless, Ariel maintained he doesn’t feel any awkwardness working with his ex-girlfriend Regine.

“We worked with each other numerous times. It’s always comfortable working with Regine. We’re used to each other,” he happily exclaimed.

READ: Regine Velasquez on reunion project with ex-flame Ariel Rivera: “It’s good to be working with him again.”

Even Regine is excited to revive their teamup for GMA-7’s two-part Christmas special where theywill be singing famous Filipino Christmas carols such as “Himig Ng Pasko,” “Sana Ngayong Pasko,” “Kumukutikutitap,” and “Simbang Gabi” among others.

Asia’s Songbird is also excited to be working with Julie Ann San Jose.

“So, it’s wonderful to work with her. Plus, I know her because I work with her every Sunday [on Sunday All Stars].

Although it’s their first acting project together, Regine said that she and Julie Ann had no trouble adjusting to their mother and daughter characters.