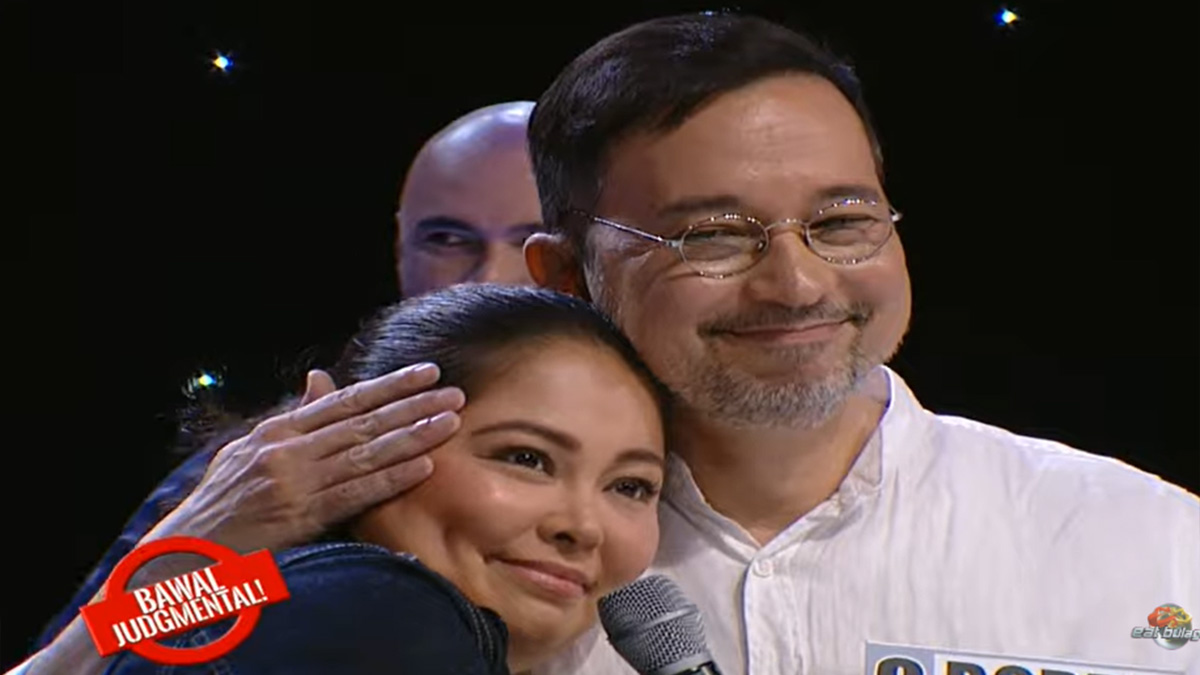 Did you know that Angelu de Leon and Bobby Andrews of TGIS did not become a couple in real life?
PHOTO/S: Eat Bulaga

Some of the lead stars of GMA-7 and VIVA TV's youth-oriented series, TGIS, made a guest appearance in the Eat Bulaga segment, "Bawal Judgmental."

The guesting, which trended on Twitter today, February 27, 2020, had a lot of revelations about the show's main cast from three different batches. Fans tuned in to see the stars reminisce about their stint in the '90s youth-oriented show TGIS or Thank God It’s Sabado.

PEP.ph (Philippine Entertainment Portal) compiles the highlights of the TGIS reunion in the "Bawal Judgmental" segment.

1. Angelu de Leon and Bobby Andrews were never in a relationship.

Angelu and Bobby formed the most popular love team ofTGIS during the show's run, which is why people assumed that they became a real-life couple.

However, in the "Bawal Judgmental" episode, it was revealed that they never had a relationship.

Bobby said, "We work well kasi together. We are good friends, we mesh together. Unfortunately, hindi lang naging kami."

Towards the end of the segment, Ciara Sotto tried to contest their claim that they were never together.

Angelu explained, "Yung explanation talaga namin ni Bob, because nga we're really soulmates, we're more than friends but less of a lover. That's why we're really good with each other."

Angelu first said this when she and Bobby did a guest appearance in PEP.ph's online talk show, PEPTalk, in 2015.

Angelu said back then during that interview, "I remember kapag ini-interview kami, 'What do you guys have?'

In the PEPTalk episode, Bobby revealed that he wanted to court Angelu back then.

One of the biggest revelations was the fact that Michael and Angelu actually became an item.

This came as a shock to everyone since they were not a love team at the time.

According to Michael, his relationship with Angelu did not last long because of her love team with Bobby.

Ang TV is a youth-oriented show that aired on ABS-CBN in the early '90s.

Aside from Michael, Angelu also had a brief relationship with Onemig Bondoc.

Onemig was the third wheel to Angelu and Bobby's love team in TGIS.

3. Ciara Sotto had a relationship with love-team partner Onemig Bondoc.

If there is one TGIS love team that led to a real-life relationship, it was the pairing of Ciara Sotto and Onemig Bondoc.

After Onemig's character, JM, got heartbroken over Peachy (Angelu), he shifted his attention to Rain (Ciara).

According to Ciara, her relationship with Onemig lasted for about eight months.

It is a common knowledge in showbiz that both actors became romantically involved with their respective love-team partners.

Dino is looking forward to reuniting with Kim soon.

Eat Bulaga! host Maine Mendoza admitted that she was a fan of Kim and Dino's love team.

According to Polo, his relationship with Sunshine lasted for four years.

He pointed out, "Pero kasi, on and off dahil siyempre, bata kami nun, nag-aaway, nagbi-break, pero all in all, four years."

Another love team from TGIS batch two that became a real-life couple were Antoinette Taus and Dingdong Dantes. Unfortunately, they were both not present at the reunion.

5. Bobby Andrews met his partner on the set of TGIS.

Bobby might not have ended up with his TGIS love-team partner Angelu de Leon, but it was TGIS that allowed him to meet his wife, Bienne Co.

In fact, Angelu played a big part in their relationship.

"But when I really started dating her, after a couple of months, nagkita uli kami kasi meron kaming radio interview, it was Angelu who introduced us again."