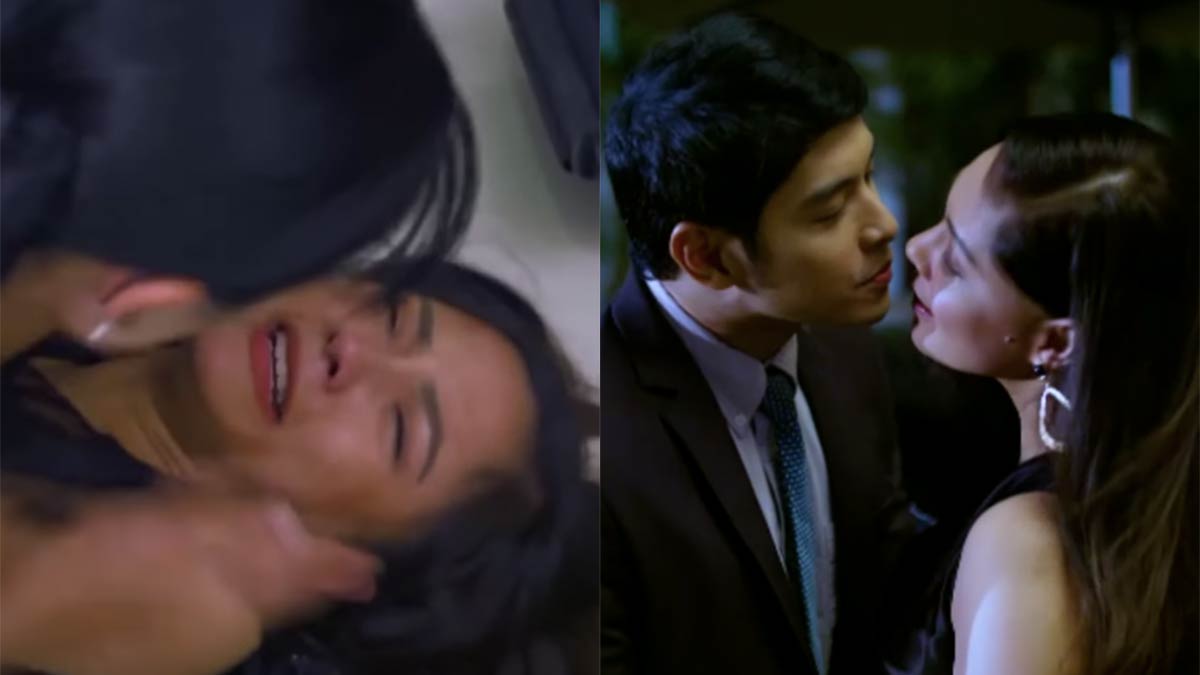 (Left frame) In ABS-CBN's Love Thy Woman, Kim Chiu had an intense catfight with Yam Concepcion (not in photo). In GMA-7's (right frame) Magkaagaw, Jeric Gonzales and Sheryl Cruz were caught having an affair by Sunshine Dizon (not in photo). These scenes were aired in the week of March 9 to 13, the last week that both networks followed their regular programming.
PHOTO/S: Love Thy Woman (ABS-CBN) / Magkaagaw (GMA-7)

The local TV industry, particularly the production of teleseryes and entertainment programs, has also been greatly affected by the coronavirus (COVID-19) pandemic.

To combat the spread of the dreaded disease, President Rodrigo Duterte declared a community quarantine in Metro Manila last March 12.

For this reason, ABS-CBN announced on Friday, March 13, that it will suspend the production of its drama and entertainment programs.

GMA-7 also followed suit with the suspension of tapings for its shows, announced on Saturday, March 14.

The suspension of teleserye and entertainment programs made a great impact in the programming of ABS-CBN and GMA-7.

ABS-CBN temporarily stopped the airing of some of its programs and replaced them with old shows.

The Kapamilya network replaced its prime-time programs starting March 16, while the afternoon block continued with its regular programming.

Starting March 18, GMA-7 will stop airing some of its afternoon and prime-time programs to make way for its old shows.

This means that the week of March 9 to 13 is the last full week that both networks followed their respective regular programming schedule before suspending the production of drama and entertainment programs.

Here are the comparative ratings of ABS-CBN and GMA-7's afternoon programs from March 9 to 13 based on the two leading ratings providers: AGB Nielsen and Kantar Media.

Take note that this article focuses on the programs aired on the afternoon blocks of the two networks: GMA Afternoon Prime and ABS-CBN Kapamilya Gold.

Based on AGB Nielsen NUTAM data, Magkaagaw won in the ratings game over the last 45 minutes of ABS-CBN's variety program, It's Showtime.

Starting March 18, Magkaagaw went off the air following the implementation of a community quarantine in Luzon.

According to Kantar ratings, Magkaagaw also prevailed in its timeslot over the last 45 minutes of It's Showtime.

PRIMA DONNAS VS. LOVE THY WOMAN

Prima Donnas will continue airing until March 18. Starting March 19, Ika-6 Na Utos will take over the timeslot of Prima Donnas.

Kim's Love Thy Woman, on the other hand, will continue its regular run this week.

Prima Donnas also beat the ratings of Love Thy Woman, according to Kantar Media.

GMA-7's remake of Nora Aunor's movie Bilangin Ang Bituin sa Langit prevailed in the ratings game against its rival program, Sandugo, according to AGB Nielsen. This Kapuso show is top-billed by Mylene Dizon, Kyline Alcantara, and Nora herself.

Sandugo, an action drama starring Ejay Falcon and Aljur Abrenica, is down to its final week.

Bilangin Ang Bituin Sa Langit will continue its regular run until it finishes airing all of its pre-taped episodes.

Sandugo lost to Bilangin Ang Bituin Sa Langit for the whole week, according to Kantar Media.

Based on AGB Nielsen data, ABS-CBN's early prime-time series, Pamilya Ko, only won for one day against the last 45 minutes of GMA-7's variety program, Wowowin.

Wowowin won the ratings game from March 9 to 12, while Pamilya Ko registered a higher TV rating on March 13.

This family drama series Pamilya Ko was temporarily taken off the air on Monday, March 16. The show that took over its timeslot was the 2011 inspirational drama series 100 Days To Heaven starring Coney Reyes, Jodi Sta. Maria, and Xyriel Manabat.

According to Kantar Media, Pamilya Ko won against the last 45 minutes of Wowowin in the ratings game for four days: March 9, 10, 12, and 13.