Kim Chiu considers ex-boyfriend Gerald Anderson as her friend; reveals she is no longer the jealous type: "Natuto na ako." 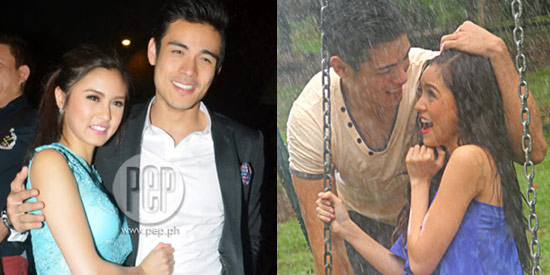 For Kim Chiu, there were "no feelings involved" when she got to work with ex-boyfriend Gerald Anderson for a coffee TV commercial earlier this year.

The actress, who was once the other half of the popular Kimerald tandem, revealed this during a recent guest appearance on the morning show Kris TV.

TV host Kris Aquino asked Kim if she felt awkward while working with her ex-boyfriend Gerald for an endorsement. Kim then stated: "Hindi, wala namang feelings involved. It's just work."

During this particular episode, Kim appeared as a guest along with her current loveteam partner Xian Lim.

The topic of their past relationships came up when Kris and guest co-host Carmina Villarroel asked Kim and Xian if they are friends with their exes.

Kim immediately pointed out that she has only one ex-boyfriend, referring to Gerald Anderson. She simply said, "Friends kami."

Xian also answered yes to the question, but did not give a name nor did he elaborate further.

Kris then asked Xian if he is okay with Kim's ex-boyfriend Gerald. "Okay lang sa iyo? And you work with him a lot," Kris pointed out.

Another question posed to the two of them: Are they the jealous type?


FROM PAST TO FUTURE. The tandem popularly known as KimXi took part in a compatibility game that asked them several questions ranging from their first impressions of each other to their ideal marrying age to the number of kids they would like to have in the future.

Kim and Xian were both asked to recall their first impressions about each other.

Xian wrote down his initial thoughts about Kim: "cute, kind and loving."

For her part, Kim considered Xian as "mayabang, pogi."

Kris asked, why did Kim consider Xian as "mayabang"?

What do they consider as their ideal marrying age?

Xian put down 40+ years old while Kim revealed that she would like to settle down when she reaches the age of 29.

How many babies would they like to have someday?

Xian answered that Kim wanted 5+ but he noted that he himself wanted only one child since he himself is an only child.

Would they live abroad for the one they love?

Both of them answered that they are willing to relocate.

Xian, who has a blue passport because of his dual citizenship, disclosed that he is thinking about returning to the United States.

"Nababanggit ko kay Kim na I want to save up for a house abroad. I want to go back sa school abroad," said the actor.

What qualities or habits would they want to change about each other?

Kim answered that Xian is "sometimes close-minded." As for herself, she would want to change her trait of being "super vocal."


KIM NOT CLOSING HER HEART TO XIAN. The conversation then focused on the closeness of Kim and Xian who have been friends for four years and paired with each other for the past three years.

Has Xian ever told Kim that he loves her?

Are they ready to go beyond the special friendship that they have? For Kim, is Xian the type of man she wants to spend the rest of her life with? For Xian, is Kim the 'one'?

Carmina Villarroel asked Xian what made him say that?

Is it okay with Xian if Kim entertains suitors?

ON DRIVING KIM IN HIS SPORTS CAR. Xian revealed that Kim was the first person he took for a ride in his new Porsche Boxster, the car that he purchased after buying his new home.

Kim narrated that she was at a photo shoot when she got a call from Xian asking her if he could pick her up.