Manolo Pedrosa willing to shoot kissing scenes with Janella Salvador; says he will have Maris Racal as co-star in indie film 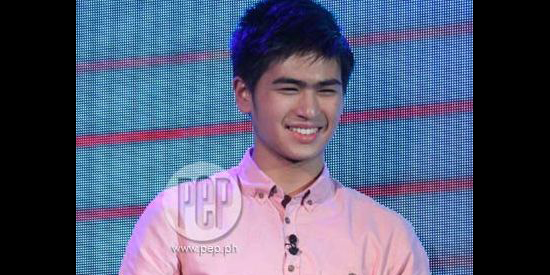 Manolo Pedrosa describes his character in the upcoming teleserye Oh My G as a "devil with a smile of an angel." He says about Maris Racal: “We haven’t seen each other in a long time na pero may upcoming movie kami na indie film."

Manolo Pedrosa will figure in a love triangle with Janella Salvador and Marlo Mortel for their new show titled Oh My G.

In an interview with PEP.ph (Philippine Entertainment Portal) at a recent product launch of JBL-Harman at Ascott Global City, Manolo described his role in the 2015 teleserye.

DEVILISH ANGEL. Manolo will be paired once again with Janella in Oh My G. They previously worked with each other on the drama anthology show Maalaala Mo Kaya. In that MMK episode titled "Selfie," Manolo played Hiro Mallari whose girlfriend Michelle Ann “Mitch” Bonzo passed away in the Bulacan State University field trip tragedy.


Since his role is now more “devilish” and "maangas," can fans expect more daring scenes, and perhaps a kissing scene between him and his leading lady Janella?

The actor also revealed he and his fellow Pinoy Big Brother All In ex-housemate Maris Rascal will be working on an indie film soon. They are slated to begin shooting soon.

“We haven’t seen each other in a long time na pero may upcoming movie kami na indie film po called Stars Versus Me.

PMPC AWARD. Though he’s still a newbie in the industry, Manolo already has an award under his belt. He took home the Best New Male TV Personality award at the 28th Star Awards for TV for his role in Maalaala Mo Kaya: “Selfie.”

The actor also admitted he was hoping to win the award.

With an upcoming TV series and film underway plus an acting award under his belt, Manolo can be considered one of the rising stars to watch for in showbiz.


While inside the PBB house, Manolo was linked to his fellow housemate Maris prompting fans to dub their tandem as "MarNolo" and "ManoRis."


The actor reveals shyly that he’s single right now and isn’t courting anyone.