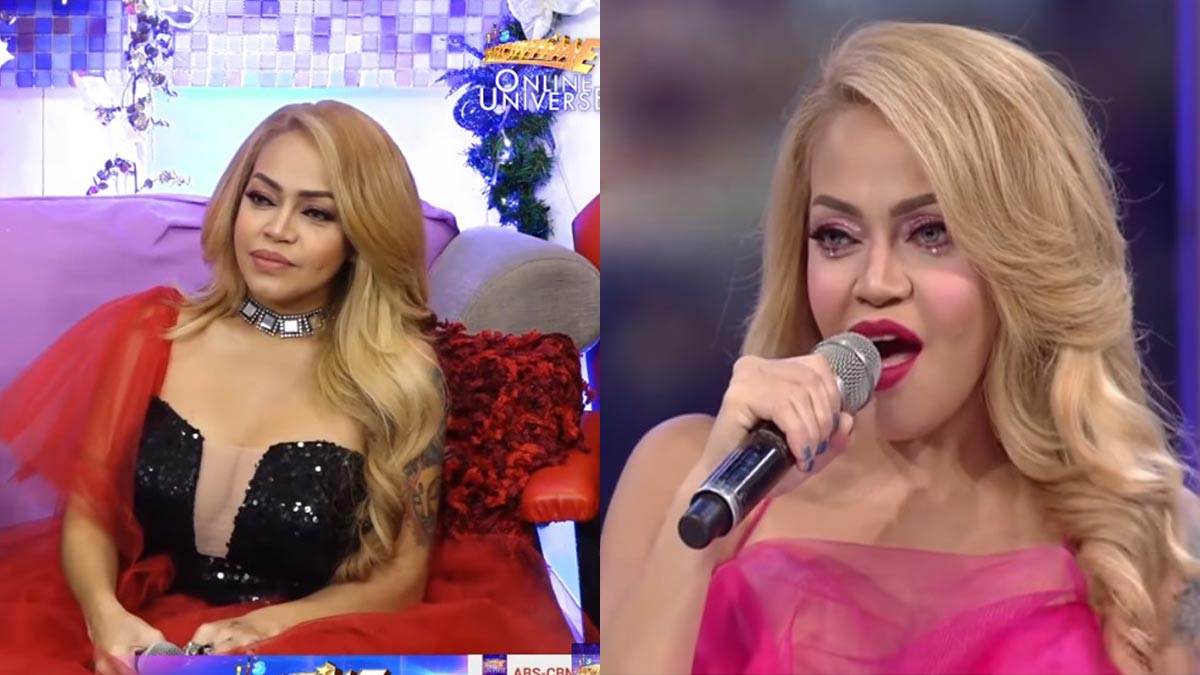 Ethel Booba has made a killing out of being vampy and witty.

Ethel Booba made headlines just days back when she denied ownership of the Twitter account with the handle "@IamEthylGabison."

It was a shocker. After all, the account had 1.6 million followers.

This Twitter account was created in January 2012 and deactivated in April 2020. Its tweets were so funny, they often became viral, and made a signature out of Ethel's line at the end of each tweet: “Charot! (Joke!)”

Whether or not she was the real owner of the controversial Twitter account, one thing's for sure: the sexy comedienne—real name Ethyl Gabison—is downright funny and brutally honest in real life.

This is evident in her numerous guestings on television that many times became the talk of the town.

PEP.ph (Philippine Entertainment Portal) looks back on particular moments when Ethel Booba brought down the house through her hilarious hirits and got those all-important ratings up.

When Ethel was a celebrity guest in Showtime Online, the online program of It's Showtime, she was asked to talk about her "witty tweets."

There she admitted that several administrators were helping her maintain the Twitter account with the handle "@IamEthylGabison."

The show put out some of the hotter tweets before Ethel and asked her to comment on them.

Ethel confirmed: "Wala. From the heart. Rekta [direct from her]."

This left the young hosts in a bit of television shock.

It may be recalled that Ethel served as co-host of Willie Revillame's Wowowillie when it was still airing on TV5 back in 2013.

They had a falling out when, on air and live, Willie scolded Ethel and fellow co-host Ate Gay in Wowowillie's February 28, 2013 episode.

Willie stopped the show to berate Ethel and Ate Gay for complaining about not winning the show’s costume contest that day.

“I am the producer, I am the host. Ako ang nag-iisip ng ikagaganda.

Not done, Willie went on to say the two owed him their careers.

Then he dared Booba to resign from the show.

“You don’t do that, mag-respeto kayo."

Ethel took on the dare.

In the show, Ethel brought up the time she was linked to a fellow who became Roxanne Barcelo's boyfriend, although the two are no longer an item.

This happened when Ethel was asked to comment on the performance of Roxanne, who was, as it happened at the time, in competition with Ethel in It's Showtime's Tawag Ng Tanghalan Celebrity Edition.

Roxanne smiled as it dawned on her who Ethel was referring to. "Aaahh!"

Ethel said it out loud, "Will."

Roxanne responded, smiling, "Sa 'yo galing! In the house."

They were referring to Will Devaughn who was Ethel's fellow housemate in the Pinoy Big Brother house when they both joined PBB: Celebrity Edition 2 in 2007.

Roxanne and Will had a four-year relationship that ended in December 2017.

Vice Ganda asked Ethel if she and Will ever became a couple, and Ethel answered quickly, "Hindi ah!"

Ethel teased another celebrity, in his own show, about having a guy whom she once also had.

This time it was Vice Ganda, the host of the ABS-CBN comedy talk show Gandang Gabi Vice.

The GGV host looked confused and asked her to identify the guy she meant.

An annoyed Vice Ganda then said to her, "Tatadyakan kita."

Vice Ganda's current boyfriend is Ion Perez, who is known as "Kuya Escort" in It's Showtime.

On another segment in the same GGV guesting, Ethel Booba was interviewed, alongside Roxanne Barcelo and Ana Ramsey.

The three women performed excerpts from the songs they performed in It's Showtime's Tawag Ng Tanghalan Celebrity Edition. They then took turns making comments on each other's performances.

At the 3:44 mark of this video, Ethel gave a powerful rendition of "I'll Never Say Goodbye."

When Vice Ganda asked Roxanne to point out flaws she saw in Ethel's song number, Roxanne said, "Nothing. It was a pristine performance."

Roxanne went on, in a serious tone, "I thought it was flawless." Then she deadpanned, "Pristine Reyes," this time calling in the name of Viva star Cristine Reyes.

To finish her comments, Roxanne said, "Her breath control was on point. I think she hit every note with passion and fervor."

ON GETTING A NOSE JOB

When Ethel and Rufa Mae Quinto, another funny person, appeared together on Gandang Gabi Vice, one topic discussed was the proliferation of fake news.

At the 1:34 mark of this video, Ethel asked Rufa Mae, as she pointed at Rufa's nose, "What about the nose?"

Rufa Mae then turned on Ethel and asked Ethel if her nose was real.

PEPsters, what are your favorite guestings of Ethel Booba?