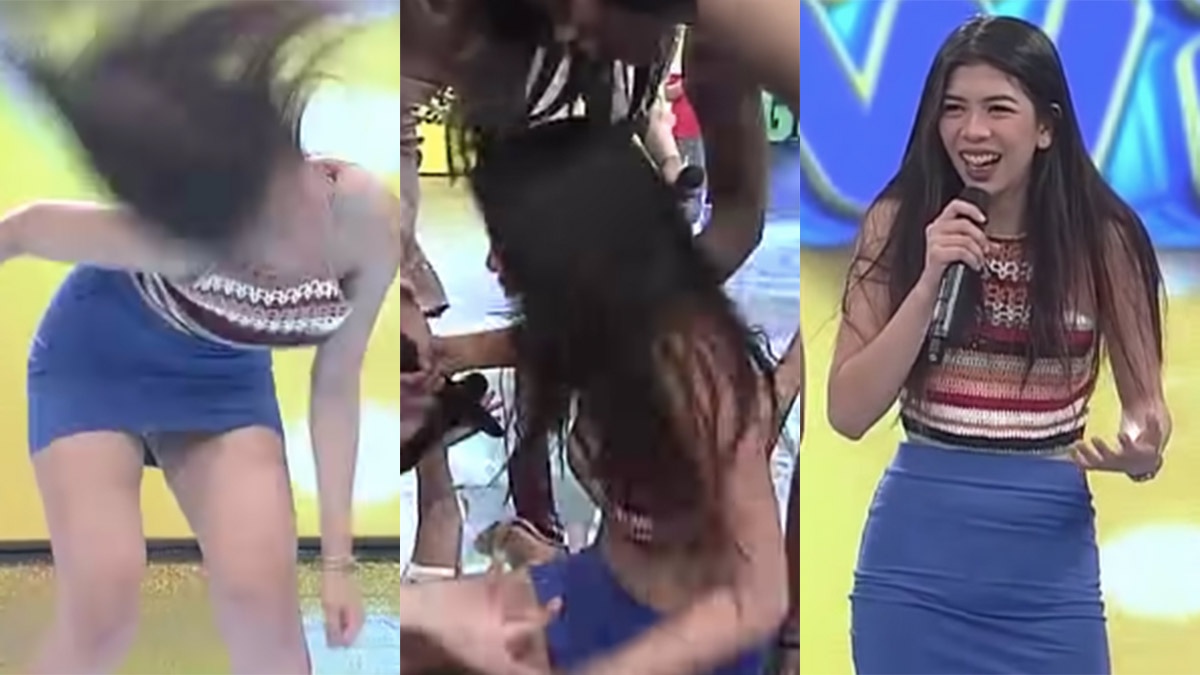 Remember when Herlene "Hipon Girl" Budol fell to the floor after doing a head roll in Wowowin?
PHOTO/S: Wowowin (GMA-7)

This is after an old video resurfaced online where she is seen falling after doing head rolls on the stage of Willie Revillame's game-variety show.

The episode, which originally aired on October 22, 2019, had Willie's co-hosts Donita Nose, Elaine Timbol, Almira Teng, Sugar Mercado, and Herlene herself showing their dance skills one by one as they delivered the opening spiels.

Herlene was the last to show off her dance moves, and for this she elected to do several head rolls, much to the delight of Willie and the audience.

To anyone watching, Harlene actually looked dizzy after the head rolls, but she worked on her balance as she continued to walk onstage.

But, just after a few steps, Herlene lost her balance totally and fell toward the cameraman, who was positioned in the audience area.

Unfortunately, the cameraman was unable to catch her, so she fell straight to the floor.

Willie's laugh could be heard ringing out, as the other co-hosts rushed to Herlene to help her stand up and return to the stage.

Herlene, who was seen massaging her head, told Willie that she really got dizzy.

Donita Nose remarked, "In fairness, 'yong cameraman natin, trabaho talaga, Wil," as she pointed out that the cameraman continued filming Herlene as she was falling flat on her face.

Herlene then asked Willie if they could replay the scene on the monitor for her to see just what happened to her.

When the screen replayed Herlene's stunt, the audience, typically Pinoy, hooted and laughed.

Willie, playing to the gallery, then prodded Herlene to do another head roll: "Isa pa, isa pa!"

The game Herlene, very likely because the person asking was the boss of the show, complied.

But she was smart enough to make certain to balance herself first before doing another round of head rolls.

It was the answer a show like Wowowin lapped up.

At this writing, the video already has more than 7 million views on YouTube.

Netizen @broooklyn92 recently uploaded a video clip of Herlene's fall on Twitter, as reply to a thread began by @AltABSCBN about "memorable Philippine showbiz eksena."

But instead of the original music, the netizen used K-Pop group BLACKPINK's song, "Boombayah," for background music.

"Boombayah," popular in the Philippines, is a dance song featuring a head-roll step.

Here are some of their funny tweets:

WHO IS HERLENE "HIPON GIRL" BUDOL?

Herlene "Hipon Girl" started co-hosting Wowowin in June 2019. A month before that, she caught Willie's attention when she participated in the "Willie of Fortune" segment.

She answered, "Hindi ako sure!"

Herlene revealed that she is called "shrimp" or "hipon" by people around her.

Herlene's answer elicited laughter from Willie and the audience.

When Herlene's Wowowin stint was uploaded on YouTube, it gained more than 2 million views in just a few days.

This is the reason Willie got her as a co-host in the show in June 2019.

Just a few weeks after she became a regular Wowowin host, Herlene caught the attention of netizens again when she had a wardrobe malfunction.

During the June 22, 2019 episode of Wowowin, Herlene performed a dance showdown with co-hosts Sugar Mercado, Elaine Timbol, and Almira Teng.

After their number, Herlene realized that her shorts had ripped! Her sweet co-hosts helped her fix her ripped shorts.