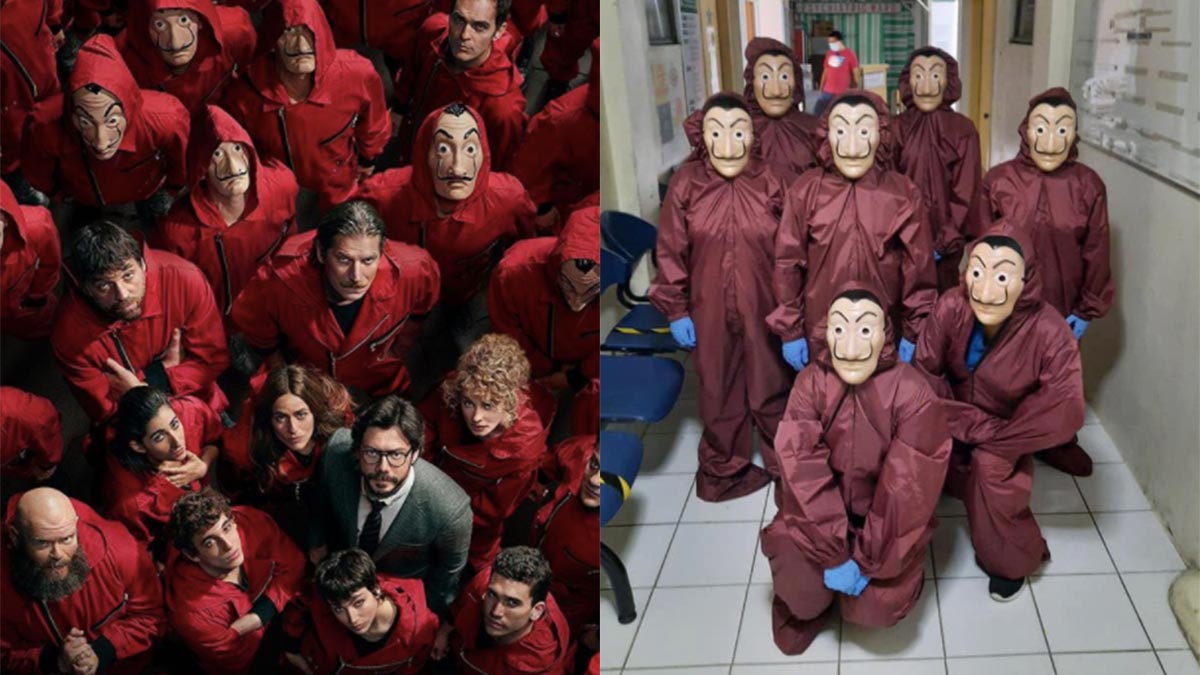 What can you say about these PPEs inspired by the Netflix series Money Heist?
PHOTO/S: @lacasadepapel on Instagram / Ram Silva on Facebook

The Netflix series Money Heist sends love to the Filipino frontliners in the fight against COVID-19.

On April 21, the official Twitter account of Money Heist has taken note of the photo of frontliners wearing personal protective equipment (PPE) inspired by the Netflix series.

The photo shows frontliners in Dali masks, just like in the series, and sporting maroon hazmat (hazardous material) suits.

Maroon is the predominant color in Money Heist.

Acknowledging Filipino creativity and craftmanship as well, the account quoted the tweet of CNN Philippines about the frontliners wearing Money Heist-inspired PPEs, and wrote a heart emoji on it.

The Twitter account of Money Heist uses the handle @lacasadepapel. La Casa De Papel is the Spanish title of the Netflix original series.

As of this writing, Money Heist's tweet has earned 11.2k retweets and 80.9k likes.

The PPEs were made by the Iloilo-based fashion designer Ram Silva.

The designer posted on Facebook photos of the masked frontliners from the Internal Medicine department of the Western Visayas Medical Center, all clad in his creations.

By the way, the masks, he wrote, were only used as props.

In an interview with Candymag.com, Ram said he wanted to spread good cheer through the PPEs he made.

"Just wanted to spread positivity amidst the chaos. I also had my 14 day quarantine because I also traveled. From there I was suffering from anxiety pag uwi ko kasi I needed to close my business for a while. Sabi ko, I need to do something, para nakakatulong ako even [habang] naka-quarantine."

Ram also explained why he chose Money Heist as the inspiration for his design.

The fourth season of Money Heist premiered on Netflix on April 4.

As of April 22, 2020, Money Heist ranks eighth among the Top 10 most-watched programs on Netflix Philippines.