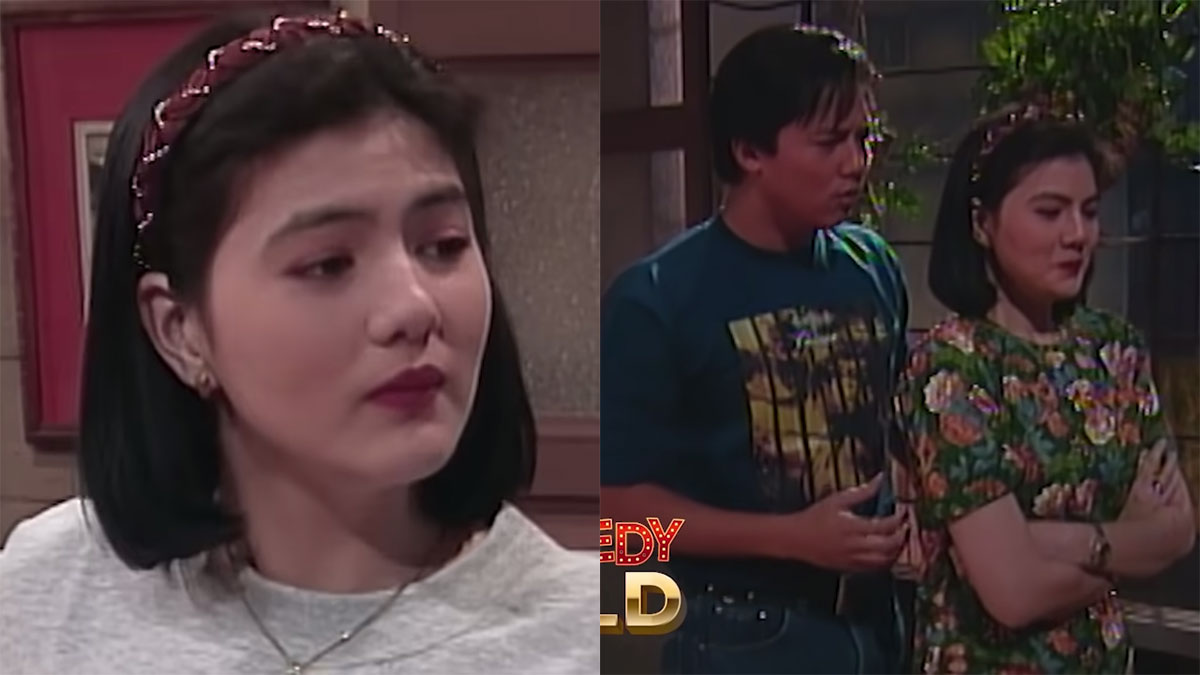 Remember when Carmina Villarroel appeared with Rustom Padilla in Palibhasa Lalake? Years later, Carmina had to leave the show because of a conflict with co-star Anjo Yllana, after her relationship with Rustom became the subject of jokes on set.
PHOTO/S: Palibhasa Lalake (ABS-CBN)

Did you know that Carmina Villarroel's departure from the ’90s sitcom Palibhasa Lalake was rooted in her relationship with her then boyfriend Rustom Padilla?

Palibhasa Lalake was a sitcom that aired on ABS-CBN from 1987 to 1998 with an ensemble cast.

Carmina played the younger sister of Richard in the show.

In 1993, however, Carmina left the show for this reason: she had a falling out with Richard, John, Anjo.

According to reports, the situation on the set of the show became problematic when the male stars started ribbing Carmina about her relationship with Rustom.

At the same time, it was reported that Anjo had a rift with the Padillas.

The Palibhasa Lalake stars' jokes did not sit well with Carmina as she said in a 2014 interview on Jeepney TV’s Biyaheng Retro, “That time, medyo serious na iyong tampuhan.

“But since may ibang taong involved, I had to choose between them [and my boyfriend].”

The conflict between the male stars and Carmina came to a head when it became the talk of the town to the point it affected the show.

The solution of the producers of Palibhasa Lalake was to write off her character and let go of Carmina.

She said in the interview, “They also made a choice to let me go because lumaki na, e.

“It was just so sad that I had to leave, and, obviously, I chose the other one kaysa doon sa show."

Leaving Palibhasa Lalake was doubly hard for Carmina because it was her first regular TV show in ABS-CBN, but she must leave.

She recalled, “Siyempre, parang sad lang. It was my first TV show in ABS ‘tapos family pa, sitcom pa, ‘tapos I had to leave.

"May magulang na kailangan to be firm with your kid kahit nasasaktan, tough love.

And she was right about that. Carmina related further that she was asked to return as a guest star in few episodes of Palibhasa Lalake before the show ended its run in 1998.

She looked back, “When Palibhasa Lalake ended, ginuest nila ako. I think… I don’t know if it was the last episode or basta malapit na mag-end iyong Palibhasa.

“And before I guested, we were okay na, pero hindi pa kami nagkakakitaan personally.

By that time, Carmina was already with GMA-7 and VIVA.

A postscript: Rustom had a guest appearance in one of the early episode of Palibhasa Lalake, way back before Carmina left the show.

More tidbits: In 2019, Carmina and John reunited in the GMA-7 teleserye Kara Mia, where they played the parents of Barbie Forteza and Mika dela Cruz.

In 1994, a year after Carmina left Palibhasa Lalake, she and Rustom got married.

In 1996, Carmina and Rustom separated. Their marriage was annulled in 2002.

In 2006, Rustom publicly came out of the closet in the reality TV show, Pinoy Big Brother: Celebrity Edition

Rustom later changed his name and identity from he to she, and is now known as the transgender BB Gandanghari.

In the latest episode on June 21 of her YouTube vlog titled BB Uncut, BB revealed that Carmina knew about her decision to come out on Pinoy Big Brother.

"Gusto rin niyang makita iyong acceptance ni Carmina, siguro, at the back of his head.”

BB said Carmina told Rustom she would give her all-out support for his decision to come out.