ABS-CBN, GMA-7 stars are together in TV5 shows: no more network war? 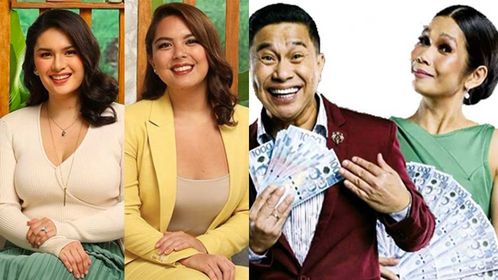 Kapuso Pauleen Luna (L) and Jose Manalo (2nd from R) get the chance to work with Kapamilya Pokwang (R) and Ria Atayde (2nd from L) in the shows produced by Archangel Media for TV5.
PHOTO/S: PR

Archangel Media, a blocktimer on TV5, has set aside network war.

Its three new shows—Fill In The Bank, Bawal Na Game Show, and Chika BESH—feature a mix of ABS-CBN and GMA-7 stars.

Kapamilya comedienne Pokwang and Kapuso comedian Jose Manalo are the hosts of Fill In The Blank.

Behind these three shows are director Mike Tuviera, president and chief executive officer of Archangel Media, and Joe Oconer, chief finance officer and chief operating officer of the TV and film production outfit.

Both producers are known to be part of APT Entertainment headed by Antonio P. Tuviera.

Tuviera is also one of the owners of TAPE, Inc. that produces the noontime show Eat Bulaga!

Direk Mike is the son of Antonio “Tony” Tuviera, while Joe is also the chief finance officer of APT Entertainment.

In an exclusive Zoom interview with PEP.ph (Philippine Entertainment Portal), Mike and Joe gave details on how they managed to have a mixed bag of Kapuso and Kapamilya talents in their shows.

In terms of management, there were no problems in getting Jose, Wally, Paolo, and Pauleen for the TV shows of Archangel Media because their show, Eat Bulaga!, is produced by TAPE Inc., which is also owned by Tony Tuviera.

But getting talents from ABS-CBN, particularly those being managed by the network's Star Magic, was a different story.

Star Magic is the talent-management arm of ABS-CBN and its artists are usually exclusive to Kapamilya projects.

Mike explained, “We just talked to them. It was very much like any other case na we would.

“We wanted different faces and fresh faces all over so that there’s a new chemistry and there’s a freshness when you watch the shows.

“So, we were always dealing na with them when it came to who could guest in the game shows and who would be great to guest in the talk shows, and all of that. We were already dealing with them.”

Negotiations with Star Magic had been pretty smooth given that the contracts of its talents were hugely affected when Congress denied the renewal of ABS-CBN’s broadcast franchise on July 10, 2020.

In a Rappler report on August 23, Star Magic Chairman Emeritus Johnny “Mr. M” Manahan said their talents are free to go wherever there is work, even in rival networks GMA-7 and TV5.

IN THE CASE OF RIA ATAYDE

Compared to Pokwang and Pauleen, Ria is a greenhorn when it comes to hosting a show.

Same goes with Pauleen, who has been co-hosting Eat Bulaga! since 2005.

Since Pauleen is part of Eat Bulaga! and Pokwang has already worked with APT Entertainment via the movie Mission Unstapabol: The Don Identity, it took “several names” before Archangel got the right person to complete the triad.

It became a bit of a challenge because most celebrities, fearing COVID-19 contagion, would rather not step out of their homes.

Mike said, “There were several names—some from Star Magic, some from us, some from TV5. There were many names that were being suggested.

“Some people were not available, and some people asked us to respect their decision not to go out first for safety concerns.

“So, if there is anything like that, we completely respected that.”

In the end, the hosting project went to Ria.

Mike continued, “None of them came as close as Ria, wherein we really interviewed already, spoke with her and all of that.

"And then that went really fast because the chemistry was so good with the other two. That went pretty fast.

“Truthfully, there were several names that were being suggested and we tried to kind of mix and match, but for whatever reason…

“Sabi ko, there will come a time naman. If we were meant to work together or they can guest in the show later on, why not?

“We do admit naman and we do accept that we live in medyo extraordinary times. If they are not comfortable going back to work yet, by all means we respect that.

“When we saw Ria, we saw her energy on cam, then I said I think siya iyong perfect for this.

"She was the last one to join in, and when she came in, and when we saw the three of them together, that’s when we decided na we have the right people na.”

Mike said Archangel Media's negotiations with Star Magic to get Ria as host was easy breezy.

“With Ria, inayos lang namin iyong terms of nagpaalam nang maayos and her managers fixed whatever has to be fixed on her side.

“It was very, very smooth, there was no complication whatsoever, I was very happy kasi kami naman, everything we did was above board.

“We told TV5 who we were interested in, and then we talked to Star Magic and then she was available naman, she was willing.

"And then nagpaalam sila on their side, inayos namin on our side and then everything fell into place."

IN THE CASE OF POKWANG

Pokwang, who used to be an ABS-CBN talent managed by Star Magic, was the first Kapamlya to transfer to TV5 after the Kapamilya network's franchise was revoked.

The reports about her doing a show for TV5 were fuelled by her appearance on Eat Bulaga!

Later, it was revealed that she would have two shows for the Kapatid network: Fill In The Bank and Chika BESH.

Mike explained how Pokwang was tapped to do two shows with them.

He said, “The reason it became two shows was because they always had their peg for a talk show, that’s why nauna siya, she was the first to be on the list.

“She was always pegged to do, eventually, a talk show or anything of that kind of format then it was us who asked if she could do a game show.

“What we were asking is, 'can we do the game show first, and then the talk show later?'

“Pero medyo nagkatugma and there was a slot naman that was open. Nangyari, nagsabay-sabay, so we also have to fix basically her schedule also.

"Of course, she’s very careful also because she has a family. Health is the utmost priority for everyone right now.”

For co-hosting Fill In The Bank with Jose Manalo, Mike said he saw the two stars' chemistry while doing the movie Mission Unstapabol: The Don Identity.

Starring Vic Sotto and Maine Mendoza, the movie was shown in the 2019 Metro Manila Film Festival, and produced by APT Entertainment.

Although Pokwang and Jose did not share many scenes, they jived behind the camera.

Mike recalled, “With the pitch nga for Jose and Pokwang, that all was born from the movie I did last year for MMFF kasi they were together there.

“When I was speaking with TV5, I told them, these two—Jose and Pokwang—you can barely control them on set. Iyong asaran nila, iyong mga jokes nila, ang bilis nila!

“Mga side comments, mga punchline, ang bilis. It was fun for us to just watch it on set because they weren’t together that much on screen in terms of scenes.

"I want to try to find a way and then suwerte that things fell into place that became Fill In The Bank.”

WORKING WITH MORE ARTISTS IN THE FUTURE

At the moment, Archangel Media is looking forward to working with more artists from the two networks and various talent agencies.

“Let’s entertain, let’s inspire naman because it’s such an extraordinary time, let’s come up with a content to inspire and make people happy.”