TOTOO BA: TGIS, which ran for four years, was supposed to air for only one season? 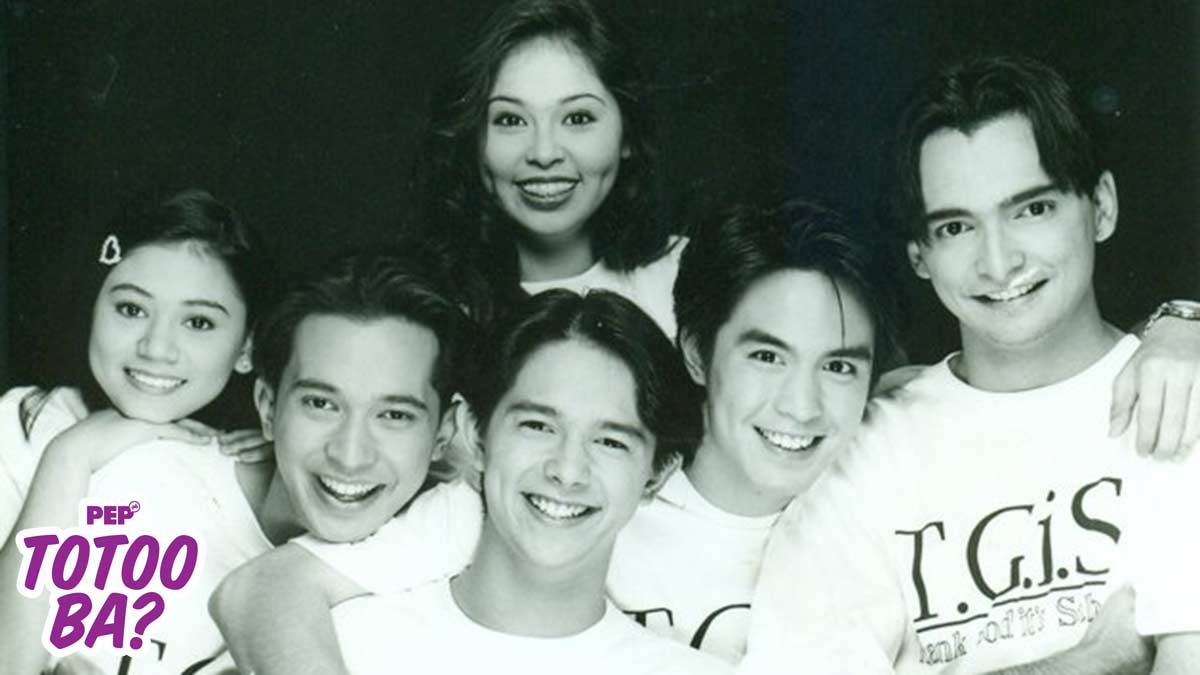 TGIS director Mark Reyes recalls the time when GMA-7 almost pulled the plug on the show: "Give us time, give us one more season.”
PHOTO/S: TGIS (GMA-7)

The youth-oriented show TGIS, or Thank God It’s Sabado, was a phenomenal success during its run from 1995 to 1999.

The series, produced by VIVA Television, aired on GMA-7 every Saturday afternoon.

The story revolves around nine high-school teeners demonstrating what coming of age is like: learning and discovering new things, keeping friendships intact, and falling in love.

The show catapulted many of its cast members to stardom and the series itself created a fan base that has remained active to this day, long afterTGIS ended in 1999.

On August 13, 2020, the TGIS barkada celebrated the show's 25th anniversary with the fans joining the online get-together.

The cast capped off their celebration with a guest appearance on PEPLive, PEP.ph’s live online talk show on Facebook and Kumu, on August 27.

One of the most-asked questions about the show was addressed during their guesting.

Totoo ba: TGIS was only supposed to run for one season?

Direk Mark then shared how he found out from Veronique del Rosario-Corpus, the show’s producer, GMA-7's plan to pull the plug on TGIS.

He said Veronique was told by the network that the show was not working, that VIVA should try something else.

He also credited Veronique as the main reason why the show went on, “Ipinaglaban niya talaga iyong show.”

TGIS: A GAMBLE IN ITS TIME SLOT

Direk Mark said that VIVA Television, headed by Vic del Rosario, had been warned by GMA-7 about missing the right market given the show’s Saturday time slot.

Kit recollected, “'It’s the moms watching in the afternoon. How can you give that remote control to the kids? The moms are the ones holding it,' sabi sa akin.

She recalled Raymund Miranda, a former GMA-7 executive, telling them that no one had put up a show for teens in that time slot.

“I don’t know what was airing pero it’s never been done, so we really have to build the audience.

After all that discussion over time slot, GMA-7 decided to give TGIS another season.

The new season proved that VIVA was right to bet on the show: Teens of the ‘90s had fallen in love with the show.

Angelu attested, “Ang nakahawak na ng remote control, all the kids, di ba iyon ang kuwento noon? All the parents had to step back and watch with the kids.”

In 1997, the TGIS teens graduated from high school and moved to college.

This paved the way for the group, except Ciara, to move to a new show titled Growing Up that aired on prime-time.

Ciara would later join Growing Up until its finale in February 1999.

Click here to watch the full episode of #TGIS25OnPEPLive.