TV5 blocktimers on improved rating of shows: "Happy but tempered" 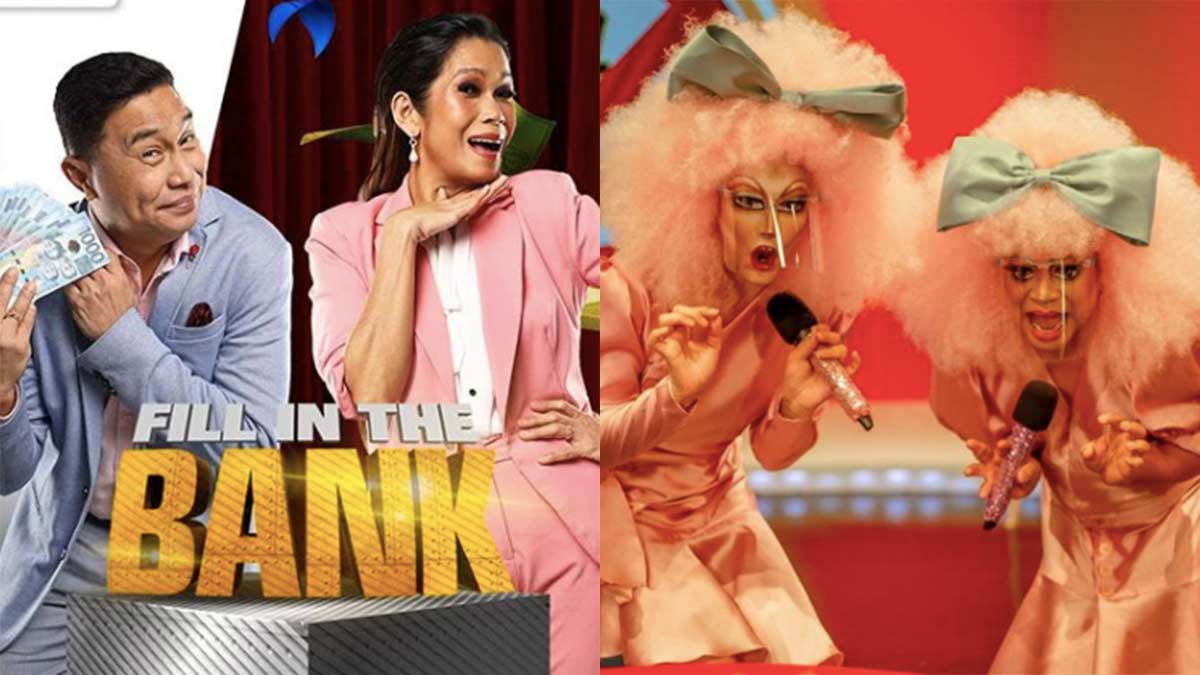 Top executives Mike Tuviera and Joe Oconer (not in photo) of Archangel Media are happy their TV5 shows—Fill In The Bank, Bawal Na Game Show, and Chika BESH—are rating well and getting a good share of commercial load.
PHOTO/S: Archangel Media / TV5

The three shows produced by Archangel Media for TV5 are looking good ratings-wise, and the owners of the production outfit are elated.

The three shows are the game shows Fill In The Bank and Bawal Na Game Show, and the talk show Chika BESH.

On August 17, PEP Troika reported the ratings of new TV5 shows based on AGB NUTAM ratings on their respective pilot episodes on August 15.

Fill In The Bank, hosted by Jose Manalo and Pokwang, got a rating of 1.3%, while Wally Bayola and Paolo Ballesteros’ Bawal Na Game Show had a rating of 1.8%.

On August 18, PEP.ph (Philippine Entertainment Portal) obtained the reaction of Archangel Media owners Mike Tuviera and Joe Oconer on this bit of good news about their shows on TV5.

According to Joe, also the company's chief finance officer, “Sa akin, with the numbers that you mentioned na it improved from previous ratings, I’m happy and proud of our production team.

“I’m happy for Archangel and I am also very happy for TV5 and Cignal.”

But Joe added the company is even more cautious now than the time they were launching the shows.

He said, “We’re very aware na it’s just the start of all of these new shows.

"Though we’re very happy and we’re very proud of the shows na na-put up namin, we understand that this is just the start.

Joe also expressed satisfaction with the commercial load of the programs, saying, “Maraming commercial when I was watching it noong Saturday, noong pilot at saka last night, marami siyang commercial.

TV5 has yet to release new ratings for its TV shows, particularly the morning show Chika BESH, hosted by Pokwang, Ria Atayde, and Pauleen Luna.

However, APT Entertainment and Archangel Media are two different companies not associated with each other.

LAUNCHING SHOWS AMID THE PANDEMIC

Meawhile, Mike, being the president and chief executive officer of Archangel, has other pressing concerns besides ratings.

He told PEP.ph, “The thing I am most proud of is that we are able to create a working environment that is safe.

“Honestly, right now, that is the hardest. Iyon iyong pinakanakakabagabag, that’s the thing that is scariest.

“At the end of the day, I told the team, the most important thing if everyone remains healthy and then it’s a good show and all that.

"I cannot be any prouder than that. Dapat hand in hand. Hindi puwede iyong we sacrifice so much.

"We sacrificed our health, and it isn’t a good show. Hindi puwede sa akin iyon. Everyone has to be able to work and maintain their health.

"And everyone has to follow the rules and all of that. For me, that’s the thing I am most proud of right now...

“All of that together and the fact that naituloy namin, umere na iyong shows, and then, ngayong tuluy-tuloy na ang tapings, that is something I am proudest of.”

During the pilot episode on August 15, the two game shows of Archangel Media had given a lot of cash prizes.

Fill In The Bank guest Ronnie Alonte won the jackpot of PHP54,000.

How are decisions made on the cash prizes, especially since they are just starting?

"How much prizes we would be able to afford to give? We didn’t want it to be too small na parang hindi naman mararamdaman ng contestants.

"And we didn’t want it to be too big naman na baka after two weeks wala na kaming ipamigay na prizes.

“So, it was really maraming versions, maraming permutations iyong mechanics noong show to be able to arrive at a good compromise.

"It’s big enough and it would be felt by the winner. At the same time, hindi naman sobrang laki na it becomes a burden as a production na hindi na tatagal iyong show.

“We kept that in mind, we wanted to be able to give something significant, hindi lang parang token prize.

"Kasi part of our agenda in creating these shows, especially ngayong pandemic is, like what Direk Mike said earlier, to give entertainment and hope sa ating lahat .

Right now, celebrities, influencers, and other personalities are guesting in the game shows.

But Mike said that in the near future, they will also have ordinary people as players for the show to enjoy the cash prizes.

He explained, “We decided for the first couple of weeks to have celebrities guests because then you will be able to focus on the mechanics.

“Kasi the most difficult thing for a new format, like a game show with new rules, new mechanics, you have to explain the mechanics first and how do you do that while still entertaining people?

“So, one of the ways we wanted to do that was we guested celebrities muna so that everyone is going to have fun.

"And then the audiences would learn how to play the game, pero may iba muna gumagawa, parang sample muna.

“Eventually, we will have regular people come in and try to win the jackpot also.”

With all Archangel's best intentions, are they prepared for the usual faultfinders and bashers. This is showbiz, after all.

“If you just look at the good, maybe it’s good for your ego and feel proud of it but you learn more from the bad actually, from the criticisms. We welcome both absolutely.”