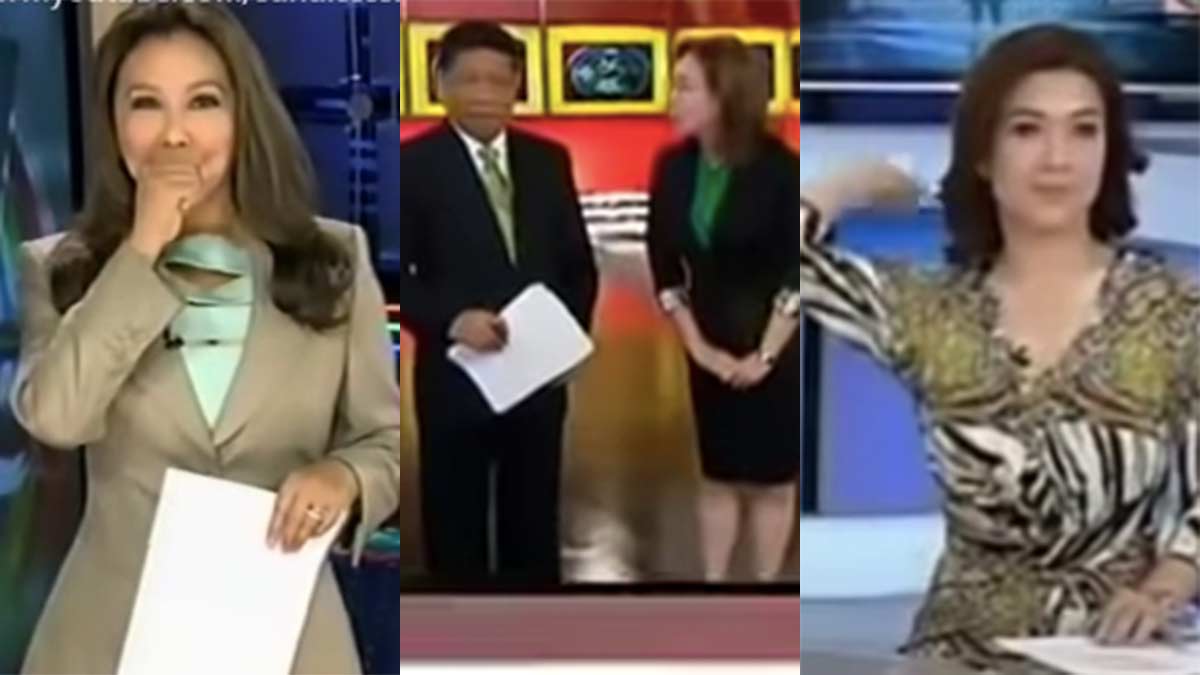 Live television is not without its bloopers.

Talk shows, variety shows, and even news programs—all are vulnerable to having their mistakes and fumbles aired in real time, and netizens are quick to pick up and repost them on social media.

News anchor Vicky Morales inadvertently displayed the wrong side of her cue card. Clearly visible on the screen was a note for the show's writer: “PA-REVIEW NG SCRIPT PLEASE.”

In 2018, 24 Oras anchor Mike Enriquez was tasked to deliver the spiels about one of the show’s segments “Sumbungan ng Bayan.”

Part of his script invited the 24 Oras viewers to contact its “Sumbungan ng Bayan” hotline.

However, Mike had quite the mix-up that night. Instead of saying the right name of the segment, he instead blurted out a phrase that sounded like “Sumbungan ng Hotdog!”

Netizens picked up the blooper and republished the video as “Sumbungan ng Hotdog.”

2. Bernadette Sembrano’s failed attempt to throw her script away in TV Patrol.

In May 2015, Bernadette Sembrano’s failed attempt to throw her script away from the camera was captured on TV Patrol.

It is normal practice in newsrooms for anchors to crumple and throw away scripts they'd already read to avoid interchanging them with the unread ones.

Bernadette tried to throw her script away while the next segment’s bumper was showing onscreen.

However, the bumper was too short, and Bernadette was caught aiming at a spot to throw the paper ball!

Realizing she was already on camera, she pretended to fix her hair using the hand she raised, put down the paper, and fixed her hair again.

As Alvin Elchico was delivering his report about the oil price hike, Bernadette was trying to hold her laughter.

On social media, the netizens dubbed the incident “Thug Life!”

3. Michael Fajatin and his “disperse” quote in Saksi.

In 2007, Saksi reporter Michael Fajatin went live to report about a rally in Mendiola, Manila.

Michael’s report became one of the most-viewed news reports on YouTube. A netizen reposted the video and titled it “DISPERSE: A Saksi scandal.”

The video resurfaced after Kim Chiu’s “Bawal lumabas” quote went viral on social media in May 2020.

A good sport, Michael reposted the meme, comparing his and Kim’s quotes.

4. Mang Tani Cruz called Balitanghali reporter by the name of the typhoon.

Jun asked Mang Tani how long typhoon Josie would stay in the Philippines.

The weatherman continued his report but struggled to control his laughter.

He paused and cleared his throat because his voice was shaking.

During his interview with Peachy Tan, spokesperson for the Million People March, Jiggy described the series of events.

On January 30, 2012, TV Patrol anchor Noli de Castro read the spiels for the next set of headlines after the commercial break.

One of those headlines was about the relaunch of It’s Showtime that day through an “Unkabogable Party.”

Realizing his blooper, he laughed, then ended his spiel with: “Sa pagbabalik ng TV… Unkabogable Patrol!”

Noli’s blooper trended on Twitter on the night of January 30, 2012.

In March 2020, Umagang Kay Ganda host Jeff Canoy accidentally blocked one of the cameras while Jorge Carino was reporting live from the studio.

When Jeff realized what happened, he immediately stepped back.

Despite the blooper, Jorge continued delivering his spiel, although it was obvious that he was trying to hold back his laughter.

Jeff and Jorge made fun of the situation on their respective Instagram accounts.

8. Korina Sanchez cleared her throat while reporting about "hamon"

In December 2017, Korina Sanchez was about to deliver a news report on TV Patrol about the increasing prices of ham.

But she suddenly felt that something was lodged in her throat.

Korina started to cough, and did a hand sign pointing at co-anchor Noli de Castro, so the cameraman would switch the frame to Noli.

She then smiled and proceeded with her news report.

Another blooper of Mike Enriquez in 24 Oras was when he called himself “Mel” during the closing spiels.

This happened in November 2012.

Mel Tiangco was first to say her goodbyes to viewers.

At the height of the enhanced community quarantine in May 2020, most news reporters had to do their shows from their homes.

In DZMM Teleradyo’s S.R.O., Doris Bigornia was in a Zoom interview with Jennylle Tupaz, president and CEO of Ayala Land Malls Inc.

Suddenly, her two cats appeared in the background, and began fighting.

Good thing Doris did not have to play referee to her cats.

But the segment went viral on social media, with international publications and TV programs like Your Morning in Canada picking up the "cat fight" story.