Where Are They Now: Miss Universe-Philippines representatives from 2009 to 2019 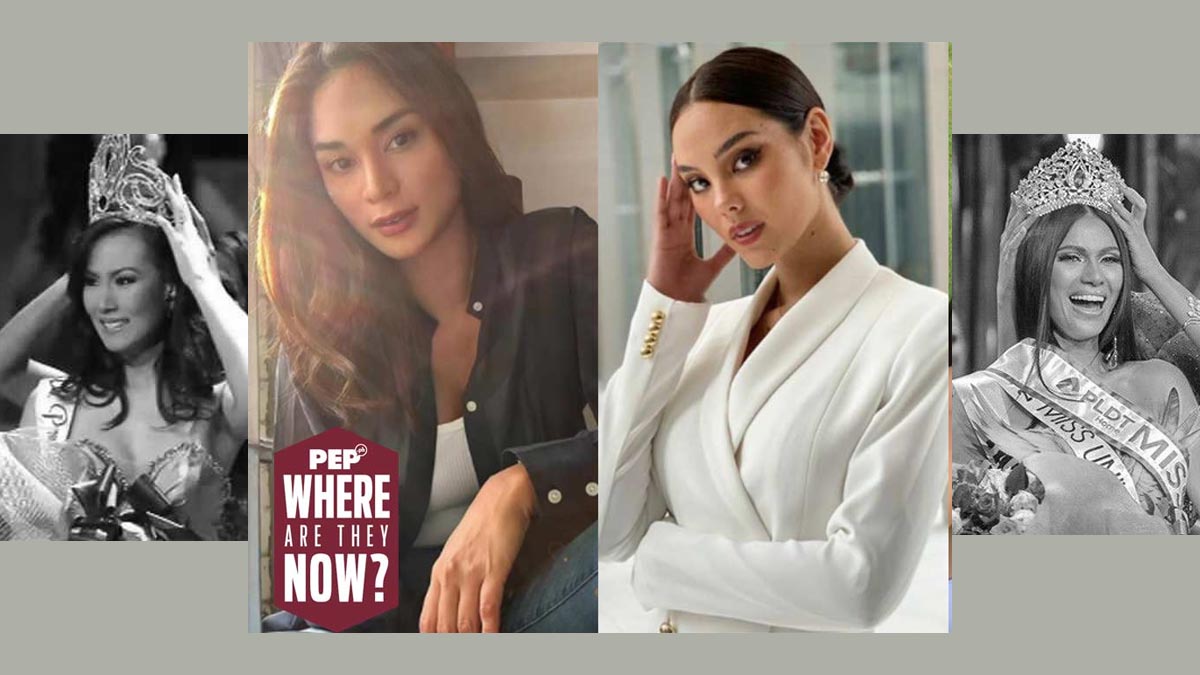 People have always followed the journey of beauty queens from local to international pageants and beyond.

Some of them have entered showbiz and just as many pursued other careers.

PEP.ph (Philippine Entertainment Portal) gives an update on the last ten Miss Universe-Philippines titleholders from 2009 to 2019.

Bianca Manalo represented the country in the Miss Universe pageant that was held in Nassau, The Bahamas, in 2009. However, she did not make it to the Top 15.

After the pageant, Bianca pursued a career on television with ABS-CBN.

Her first teleserye was the 2010 fashionserye Magkaribal, where she played the best friend of Bea Alonzo.

Bianca’s performance in the show impressed ABS-CBN management that she was given the lead role in the afternoon series Juanita Banana.

Bianca then focused on her showbiz career, doing different TV shows in the Kapamilya network.

At present, she remains part of the prime-time series FPJ’s Ang Probinsyano.

In her personal life, Bianca confirmed her relationships with John Prats and Fabio Ide.

Currently, Bianca is in a relationship with Senator Sherwin Gatchalian.

She became popular for the “major major” quote in her answer in the Q&A round.

In the beauty-pageant world, she is considered by the Pinoy fans as the one who started the country's winning streak. The winners after her all placed in the top 10, some even making it to the top 5.

After her Miss Universe stint, Venus was offered several stints in TV shows, including the GMA-7 drama series Beauty Queen and as a co-host of Willie Revillame in Willing Willie.

But it was with ABS-CBN that she signed an exclusive contract. She then became a part of Umagang Kay Ganda.

At the time, Venus had a relationship with Umagang Kay Ganda co-host Andrei Felix. They parted ways in 2013.

When she left Umagang Kay Ganda in 2013, Venus focused on giving inspiring talks to children and mentoring aspiring beauty queens.

Shamcey Supsup was the third runner-up at the 60th Miss Universe pageant in São Paulo, Brazil, in 2011.

Except for a few guest appearances on television, Shamcey, an architect by profession, shied away from showbiz, and became a restuarateur.

Shamcey is currently the national director of Miss Universe Philippines Organization, which recently held its coronation night on October 25.

In an episode of Kris TV, Janine revealed her breakup with non-showbiz boyfriend Jaypee Santos, who was with her in the show.

One of the reasons behind their misunderstanding, based on their answers during the episode, was the rumor that The Script vocalist Danny O’Donogue was courting Janine.

Currently, Janine is now based in New York where she focuses on her modeling career.

In 2016, Janine did a nude pictorial for the limited-edition NU Muses 2017 calendar.

In 2019, Janine served as a model to tennis superstar Venus Williams’ activewear line.

Ariella Arida finished third runner-up at the Miss Universe pageant in 2013 that was held in Moscow, Russia.

Ariella would then appear in showbiz engagements and charity events. In 2015, she served as one of the co-hosts of the Binibining Pilipinas 2015 grand coronation night.

Ariella then transferred to ABS-CBN to do the daytime series Playhouse and the morning public affairs program, Umagang Kay Ganda.

In 2019, Ariella played one of the major characters in the prime-time series The Killer Bride.

This 2020, with the cancelation of Umagang Kay Ganda, Ariella is set to join a TV series under GMA Public Affairs titled The Lost Recipe.

Mary Jean “MJ” Lastimosa represented the Philippines in the Miss Universe pageant in Florida, USA, in 2014. She finished in the Top 10.

Prior to winning the Miss Universe Philippines title, MJ had joined Binibining Pilipinas twice: in 2011 as second runner-up, and in 2012 where she did not get a title.

After her Miss Universe stint, MJ ventured into acting. Her first acting stint was in Maalaala Mo Kaya, where she portrayed herself in her life story.

She then did the teleserye All of Me, and hosted the short-lived afternoon game-variety program, Game ng Bayan. MJ also became part of the ABS-CBN series Bagani.

MJ was present at the Miss Universe Philippines coronation night on October 25.

Pia Wurtzbach started as Pia Romero, an ABS-CBN actress, before joining the world of pageantry.

She joined Binibining Pilipinas in 2013, where she placed first runner-up, and 2014, where she did not garner a place in the pageant.

In 2015, she finally got the Miss Universe Philippines crown and represented the country in Miss Universe 2015 pageant in Las Vegas, Nevada.

After Ariadna was crowned, Steve returned to the stage and said he had misread the results and that Pia was the real winner.

Pia is the third Filipina to win Miss Universe, following Gloria Diaz in 1969 and Margie Moran in 1973.

As Miss Universe, Pia stayed in New York during her reign.

One of her first projects after Miss Universe was the Metro Manila Film Festival entry Gandarrapido: The Revenger Squad with Vice Ganda and Daniel Padilla.

She also did the movie My Perfect You, and hosted World of the Dance Philippines.

Pia is a proud supporter of the LGBT community in light of the Orlando nightclub shooting in 2016. She called on the Philippine Senate to pass the SOGIE Equality Bill in 2018.

In 2017, Pia dated Swiss race-car driver Marlon Stockinger, but the two broke up.

At present, Pia is in a relationship with Scottish entrepreneur Jeremy Jauncey.

Maxine Medina was the representative of the 2016 Miss Universe pageant, which was held in the Philippines on January 30, 2017.

Maxine had a Top 6 finish in the pageant.

After Miss Universe, Maxine pursued an acting career in ABS-CBN.

Her first stint was the afternoon series Hanggang Saan as the third wheel to Arjo Atayde and Sue Ramirez.

She also played the leading lady of Jake Cuenca in Los Bastardos, which ran for 11 months.

Maxine used to be in a relationship with actor-model Marx Topacio, but they broke up in 2018.

Rachel Peters had a Top 10 finish at the Miss Universe 2017 pageant, again in Las Vegas, Nevada.

Except when attending lifestyle events, Rachel is rarely seen in public.

She is in a relationship with Camarines Sur Governor Migz Villafuerte. The two got engaged in 2019. They were supposed to get married in 2020, but they decided to postpone it because of COVID-19.

She owns a cafe called Bake in Siargao.

Catriona Gray won the Miss Universe pageant that was held in a province outside of Bangkok, Thailand, in December 2018.

It was reported after Catriona won the title that she had ended her relationship with model-actor Clint Bondad.

After her reign, Catriona entered show business and became a guest host in It’s Showtime.

This May 2020, a telling Instagram post of Sam Milby on his birthday confirmed that the ABS-CBN actor and Catriona have been in a relationship.

At present, Catriona is a host of TV5’s noontime show, Sunday Noontime Live, with Piolo Pascual and Maja Salvador.

In December 2019, she represented the country in the Miss Universe pageant held in Atlanta, Georgia, United States, where she made it to Top 20.

Gazini, who was raised by her mom and grandparents, met her Palestinian father for the first time in January 2020.

(ED'S NOTE: Jonathan Tan's name has been removed from the list of Bianca Manalo's boyfriends at her request.)