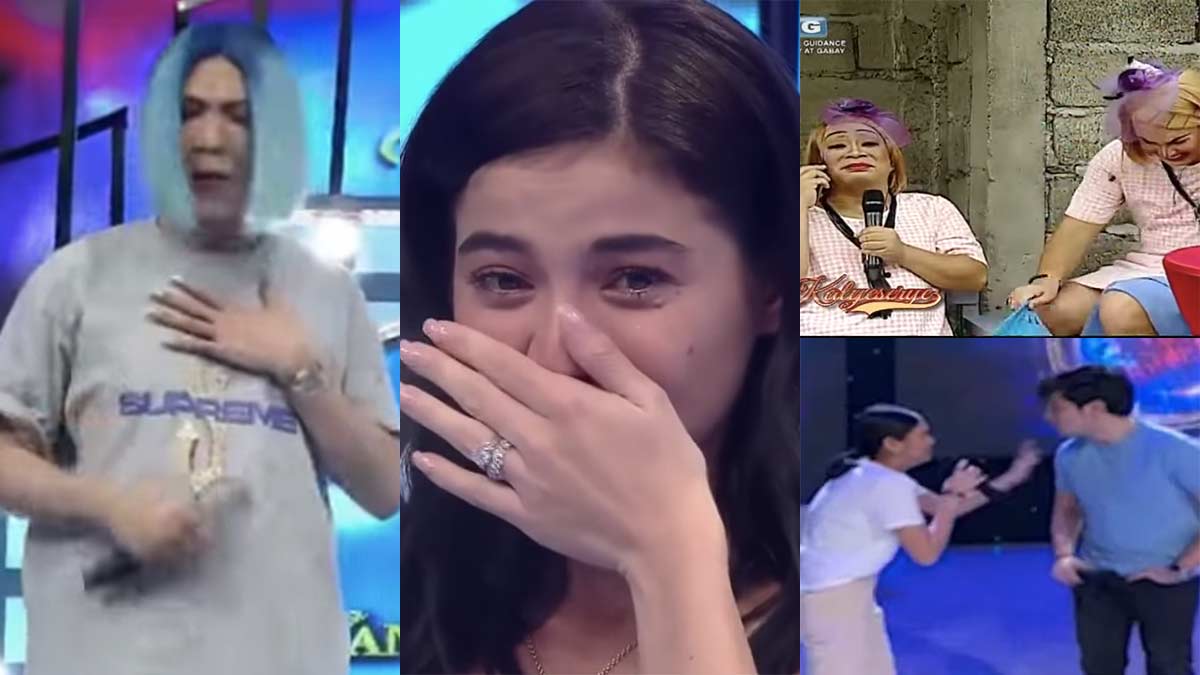 Remember the funny bloopers that happened on It's Showtime, Eat Bulaga!, and other live TV shows? See the hosts laughing at themselves!
PHOTO/S: It's Showtime / Eat Bulaga!

The mandate when doing a live TV show is to make sure that nothing goes wrong when cameras start rolling.

It's a tall order, but slips on live TV do happen, even if rarely and unexpectedly.

There are also times when hosts and producers cannot control a situation, especially when a guest or a contestant, unscripted, causes things to go haywire.

In an episode of ABS-CBN's ASAP in 2013, Iza Calzado was tasked to do the spiel inviting Kapamilya viewers to watch out for the network's Christmas ID.

However, when Iza delivered the line, she said, “Heto na mga Kapuso!”

Kapuso is how GMA-7 addresses its loyal viewers.

When Iza, a former GMA-7 artist, realized her blunder, her eyes widened in surprise.

She promptly shouted, “Mga Kapamilya!” Then she burst in embarrassed laughter.

Piolo Pascual approached Iza and gave her kisses as she continued to laugh.

Martin Nievera then quipped, “She meant full of heart! Lots of heart!”

She later took to Twitter to apologize for her mistake.

On January 8, 2020, a contestant in Wowowin nearly botched up a popular spiel from a program in the rival network, ABS-CBN.

When host Willie Revillame called contestant JC, the guy went to the mic and shouted, “What’s up…”

Realizing that he was about to say the wrong program, JC stopped himself and said, “Wowowin!”

Usually, contestants in It’s Showtime would say “What’s up, madlang pipol!” before starting their performances.

GEORGINA WILSON makes a remark THAT SOUNDs LIKE “AY P*T*!”

In 2011, Georgina Wilson was one of the hurados in ABS-CBN’s morning program, Showtime (now known as the noontime variety show It’s Showtime).

She was commenting about the performance of the first group, but Georgina wrongly addressed the contestants as “Group number two.”

Georgina was already in the middle of her comment when Vhong Navarro corrected her.

Reacting to her mistake, Georgina uttered in a soft voice what sounded like “ay p*ta!”

The audience laughed and a funny stinger began playing.

No one in the show commented about Georgina’s reaction, with Vhong merely reminding her it was the first group that was about to perform.

Georgina continued with her spiel while seemingly trying to hold her laughter.

Vice then opened up about getting “kulugo” from frogs.

When Anne butted in, she almost said something that sounded like a word not allowed on national TV!

Mariel burst into laughter, Amy’s eyes widened, and Vice smiled with a facepalm and turned his back at the camera!

Anne, who was shyly smiling, repeated the correct word as she tried to hold her laughter: “Palakang bukid.”

She then turned her back and leaned on Vice as they both hid their laughter.

Anne, convulsed in laughter, was already in tears!

Anne then told her three co-hosts, “Magbasa na kayo, please,” referring to their spiels so that they could change topic.

Prior to getting the prize, Aling Bebeng was talking to Jose Manalo, Wally Bayola, and Paolo Ballesteros.

Upon receiving the prize, Aling Bebeng thanked the hosts of Eat Bulaga!, particularly “Bossing” Vic Sotto and Joey de Leon, but she named the wrong network!

Jose then hummed the theme song of their rival program, It’s Showtime, while doing the popular gesture of the Kapamilya show’s hosts while singing the song.

He then quipped to Wally, “Oh, Jhong, bilisan mo na!”

ABS-CBN also had its share of contestants inadvertently citing wrong shows or networks.

In one episode of Kapamilya's defunct noontime show Wowowee, hosted by Willie Revillame, a female contestant won several prizes for a game.

In 2018, another “Juan For All, All For Juan” contestant went viral when she cursed on live TV!

Hosts Wally Bayola and Jose Manalo asked the contestant about what she and her husband talked about before sleeping.

The hosts on location, and even Allan K. and Joey de Leon in the studio, were caught off guard!

Jose quickly hugged the contestant, who was laughing when she realized what she just said!

In July 2020, Maine Mendoza and Alden Richards were tapped to become the main hosts for Eat Bulaga’s “Bawal Judgmental” segment.

Maine, stammering, mangled her spiels saying “maghuhugas” instead of “manghuhusga.”

VICE GANDA SHOCKED BY A CONFETTI ON IT’S SHOWTIME

In a July 2018 episode of It’s Showtime, Vice Ganda and Vhong Navarro were interviewing a contestant during the show’s “Tawag ng Tanghalan” segment.

Vice all of a sudden screamed, seemingly alarmed, in the middle of the interview!

The culprit? Apparently, a mere confetti.

Wally Bayola as his popular character, Lola Nidora, was dressed up flamboyantly as usual in the November 30, 2015 episode of Eat Bulaga’s skit, “Kalyeserye.”

The scene with Wally, Jose Manalo and Paolo Ballesteros was shot live on location outside the Eat Bulaga! studio.

In the skit, Wally was talking to Yaya Dub (Maine Mendoza) over the phone.

After he delivered his lines, a fart sound was suddenly heard live!