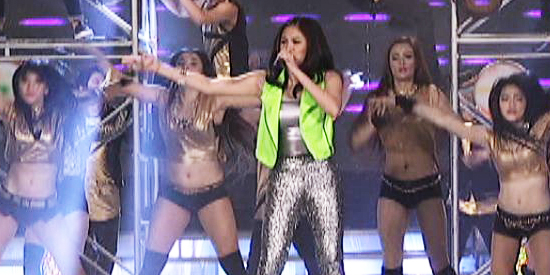 
The GMA New Year Countdown Special at the SM Mall of Asia (MOA), Seaside Boulevard was indeed a bright and beautiful scene. With over 100,000 people plus numerous performances of artists, the Kapuso network ended the year with a bang.

The brightest and hottest Kapuso stars united for their show-stopping performances that sent thrills to everyone. The event was hosted by the Master Showman German “Kuya Germs” Moreno, Kapuso stars Christian Bautista, Jennylyn Mercado, Jaya, Alden Richards, and Lovi Poe.

Chef Boy Logro opened the countdown with what he does best: provide the most delicious media noche recipes, which he prepared in real time.

Kapuso Premier actress Lovi Poe showed off her singing prowess as she performed "Royals" and "How Do We Do" together with Glaiza de Castro, Aicelle Santos, Bet ng Bayan grand finalist Veronica Atienza, and Jaya.

Another performance that really shook the stage and fired up the night was Metro Manila Film Festival (MMFF) 2014 Best Actress Jennylyn Mercado’s rendition of "Girl On Fire." The Kapuso actress is set to capture the hearts of viewers in the upcoming primetime drama series Second Chances with Camille Prats, Rafael Rosell, and Raymart Santiago.

The countdown was indeed a colorful event as GMA also highlighted some of the festivals in the country through a costume parade led by Kris Bernal, Mike Tan, Benjamin Alves, Joyce Ching, Frencheska Farr, Pancho Magno, Ervic Vijandre, Aryan Bautista and Max Collins.

The adorable teen love teams, Ruru Madrid-Gabbi Garcia, and Miguel Tanfelix-Bianca Umali also added more fun and excitement to the show. Kapuso youngest loveteam Miguel and Bianca started to bring good vibes this 2015 with the primetime series Once Upon A Kiss.

Despite the rain, Soul Diva Jaya and comedian Betong Sumaya made the crowd laugh with their musical comedy stint. Serenading the audience were voices from Maricris Garcia, Rita De Guzman, and Ultimate Bet sa Kantahan of Bet ng Bayan Hannah Precillas together with Kierulf Raboy, Renz Robosa and Veronica Atienza.

Aside from the overwhelming attendance, GMA New Year Countdown became even more special as it featured simultaneous celebrations at Kapuso Stations in Cebu and Davao.
Master Showman German "Kuya Germs" Moreno led the top of the hour portion with all the stars and representatives of the show's sponsors. As they waited for the first hour of the year, the sky started to get painted with glitters of color.

The fireworks display did not only celebrate the New Year, but it also brought an overwhelming excitement to the crowd. 2015 was warmly welcomed, and GMA’s spectacle induced a handsome amount of joy to everyone who witnessed it at the MOA Seaside Boulevard, as well as to those who enjoyed it at the comfort of their homes.