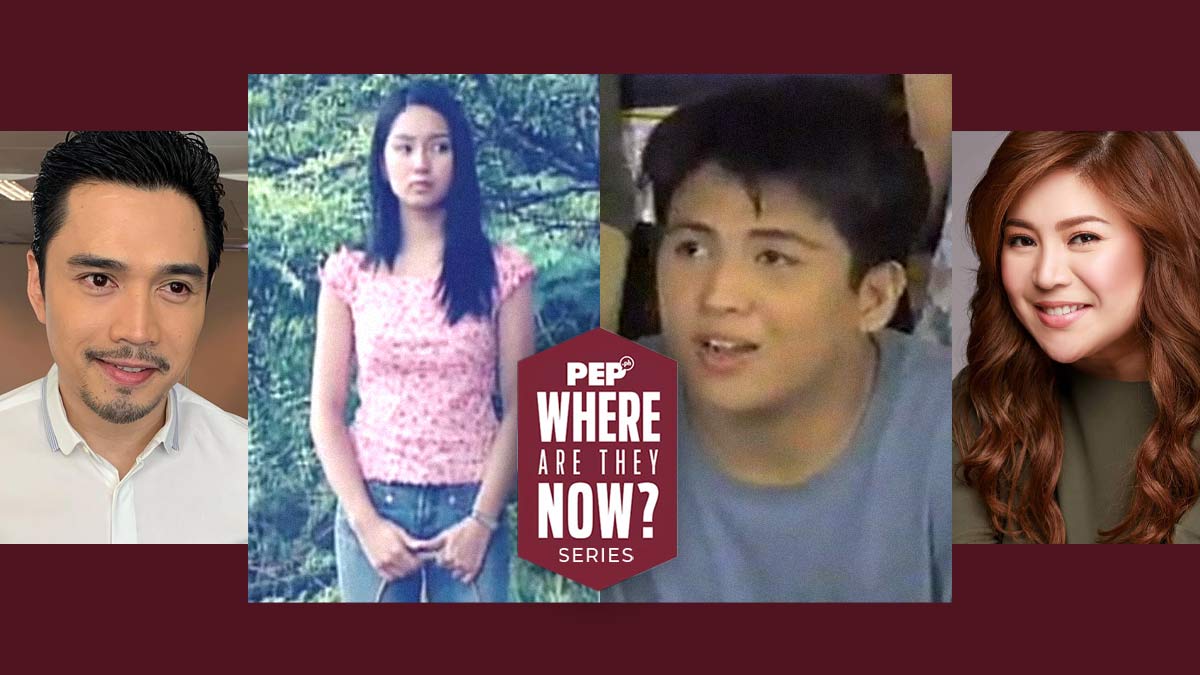 On December 4, 1999, GMA-7 launched Click, a network-produced youth-oriented show pegged to match the success of its predecessor, T.G.I.S.

Click aimed to launch the network’s up-and-coming homegrown talents and to serve as testing ground for those yet to get their big break on TV.

There were also those who decided to leave the limelight after their stint in Click.

Do you remember the original cast members comprising the first batch of Click in 1999?

PEP.ph (Philippine Entertainment Portal) takes another look at the 12 original teens of Click 21 years after the show first premiered on TV.

Roxanne Barcelo was one of the top three contestants of the 1998 Metropop Star Search, which paved the way for her to be included in Click.

She played the role of Toni, the girl who got involved with Paolo (Erwin Aquino) and, later, with Christian (Biboy Ramirez).

When GMA-7 saw the chemistry between Roxanne and James Blanco in the show, the network decided to pair them up until the last episode of the second batch.

After Click, Roxanne, James, Biboy, and the other cast members of Click transferred to the Sunday afternoon series Kahit Kailan.

Roxanne would later transform into a sexy, sultry actress. One of her remarkable roles was Natalie in the prime-time series Wildflower in 2017.

The 35-year-old star is currently busy creating contents for her YouTube channel.

She was also supposed to be part of ABS-CBN’s series, Kahit Minsan Lang, but the project was shelved due to the pandemic.

Among the cast of Click, it was Maybelyn dela Cruz who first had stints in the ABS-CBN shows Ang TV and Home Along Da Riles.

She also had parts in Click’s predecessor, T.G.I.S.

In Click, Maybelyn played the role of Rosario, the leader of the barkada.

After Click, Maybelyn did supporting roles in the GMA-7 teleseryes Kung Mawawala Ka and Impostora.

in 2010, Maybelyn herself entered politics and was elected number one city councilor in Dagupan.

In 2017, nine years after she got married, Maybelyn gave birth to her first child, Olivia.

Even though her term as city councilor ended in 2019, Maybelyn has continued doing public service as evident on her Instagram account.

Biboy Ramirez played the role of Christian in Click, where he got paired with Roxanne Barcelo and later, Trina Zuniga.

When Biboy’s Click stint ended, he took on dramatic roles in a number of Kapuso teleseryes.

Although he already quit showbiz, he occasionally appeared in teleseryes such as ABS-CBN’s Wildflower (2017) and GMA-7’s Bihag (2019).

Biboy was once romantically linked at different times with Jackie Rice and Vaness del Moral.

From 2017 to present, Biboy has been sharing on Instagram snippets of his love life with a non-showbiz girl.

James Blanco jumpstarted his acting career as an additional cast member of the first batch of Click. He played the role of Anton, who would later become the love-team partner of Toni (Roxanne Barcelo).

Toni and Anton became known as Marshy and Mallow, their pet names for each other.

After Click, GMA-7 was groomed James to become one of its leading men in its drama series.

He transferred to ABS-CBN in 2007 after which he became a freelance actor, working for ABS-CBN, GMA-7, and TV5.

In 2002, James married Tania Creighton. They have three kids.

In 2000, however, Angelika’s character Ollie in the show was killed to give way for her first GMA-7 teleserye, Ikaw Lang Ang Mamahalin, where she would play the lead.

Angelika then focused on becoming a dramatic actress, later returning to ABS-CBN in 2003 and, again, joining GMA-7 in 2008.

Angelika is married to Orion Casareo. They have two kids.

She is also the barangay chairman of Longos, Malabon City.

He was paired with his Esperanza co-star, Angelika dela Cruz, in Click, and in another mini-series, Umulan Man O Umaraw.

When his stint in Click ended, Wowie took a showbiz hiatus.

He later returned to acting in various shows in ABS-CBN and GMA-7.

In 2012, Wowie married Sheryl Ann Reyes. However, in 2014, Sheryl died one month after giving birth to their child.

Wowie, who first became popular as a dancer of Universal Motion Dancers, has been working as a Zumba instructor for three years now.

Danilo Barrios was a member of the Streetboys when he joined GMA-7. He was first cast in the weekend series Anna Karenina before joining Click.

He appeared in several acting projects until he decided to retire from acting.

Danilo is married to Regina Soquena, his first love.

Danilo occasionally does TV guesting stints during his spare time.

He was at the Streetboys’ reunion and had collaborated with other '90s dance groups in a concert titled 90s Dance Concert: Panahon Ko ‘To.

Tricia Roman was first seen in GMA-7’s youth-oriented show, Best Friends, before she was asked to join Click and play the role of Issa.

Among the original cast members, it was only Tricia who stayed until the third batch of the show, from 1999 to 2004.

Tricia then did supporting roles in teleseryes until she got married and decided to leave showbiz in 2007.

She has two kids.

She also remains in touch with Maybelyn and another Click cast member, Trina Zuniga, who now goes by her real name, Kat Maderazo.

Like Tricia Roman, Joseph Izon was also in the cast of Best Friends before being part of Click.

Joseph played Nikko, the love interest of Issa (Tricia), but his stint in the show only lasted until the first batch.

Joseph would later do minor roles in GMA-7 teleseryes and movies.

He has remained active in show business today, playing support roles in Kapuso teleseryes such as Bihag (2019) and Magkaagaw. He also participates in theater productions.

Outside acting, Joseph vlogs on YouTube and has also ventured into event photography and videography business.

Joseph is now married and has two children.

Trina Zuñiga was one of the first batch of talents of GMA Artist Center, the reason why she was included in the original cast of Click.

She played the role of Melai, who was attracted to Christian (Biboy Ramirez), but in the second batch, Melai got involved with JB (Sherwin Ordonez).

Trina exited the show in 2001 when her character was killed. It was because she transferred to ABS-CBN to join the cast of Tabing Ilog.

In a recent exclusive interview with PEP.ph, Trina revealed that her stay in ABS-CBN did not last long because she decided to leave showbiz and focus on her studies.

Trina now goes by her married name Kat Maderazo. Her husband is the TV commercial director Sid Maderazo. They have three children.

She holds Bento-making workshops via BentoByKat, where she teaches moms to prepare cute but healthier baon for kids. She is also a certified Sushi Art instructor.

Erwin Aquino played the role of Paolo, a school athlete who was in love with Toni, Roxanne Barcelo’s character.

But when Click introduced new characters in the latter part of the year 2000, Erwin was no longer included in the new batch.

Jason Red played the role of Medwin, the big brother of Paolo (Erwin Aquino), and the kuya of the Click barkada.

His stint in Click also ended when a new batch of teens was introduced in the show in 2000.

Jason is now a family man with two kids.

He also occasionally appeared in independent movies, such Ang Beer House (2009) and Imahe Nasyon (2005), and was seen in a guest appearance in ABS-CBN’s morning sitcom Doc Ricky Pedia in 2017.