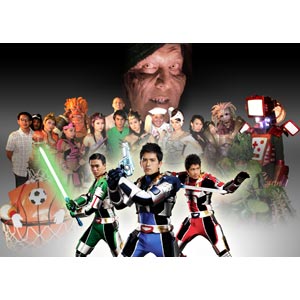 For the final week of Zaido: Pulis Pangkalawakan, the galactic team has now broken up, leaving Gallian (Dennis Trillo) alone to face the enemies of planet Earth.

Experience a one-of-a-kind breathtaking battle as the clash between the forces of good and evil intensifies in the final week of the captivating adventure series, Zaido: Pulis Pangkalawakan.

The valiant galactic team of Zaido struggles to protect both the Planet Earth and the Galactic Force from being conquered by the evil empire of their archrival, Le-Ar.

But the Zaido team, which used to be strong and dedicated in their mission to protect the Earth, is now experiencing its worst dilemma as the bonds that tie them weaken.

Instead of keeping his oath as member of Zaido, a confused Alexis joins the heinous empire of Le-Ar. He switched to the dark side after finding out that he is the son of Drigo (Jay Manalo), one of Le-Ar's leaders and Helen (Lorna Tolentino), a member of the Galactic Force. Alexis is transformed into the powerful Sigma, the newest soldier of Le-Ar out to lead his minions in conquering Planet Earth.

Meanwhile, Cervano and Amy give up their badges as members of the Galactic Force after Gallian stops them from allowing their chief Zion (Ian de Leon), who was imprisoned for treason, to escape.

Gallian marries Ariana (also played by Diana Zubiri) inside the Galactic Force. Will he ever find out that his wife is also his enemy? And is he really in love with Ariana or with Carmela?

Now that Gallian is alone, will he be able to defeat Sigma, Kuuma monsters and the Amazonas? Under the influence of Le-ar, is there a chance for Alexis to follow what his heart truly desires, that is, to fulfill his mission as Zaido Green? And who are the real parents of Cervano? To which race does he really belong, the irreverent Kuumas or the noble people of Galactic Force? And will the Zaido team be able to resolve their conflict and reunite once again to topple the evil schemes of Le-Ar?

The answers to all these questions will be unveiled in the electrifying, action-packed finale episodes of Zaido: Pulis Pangkalawakan after 24 Oras on GMA-7.