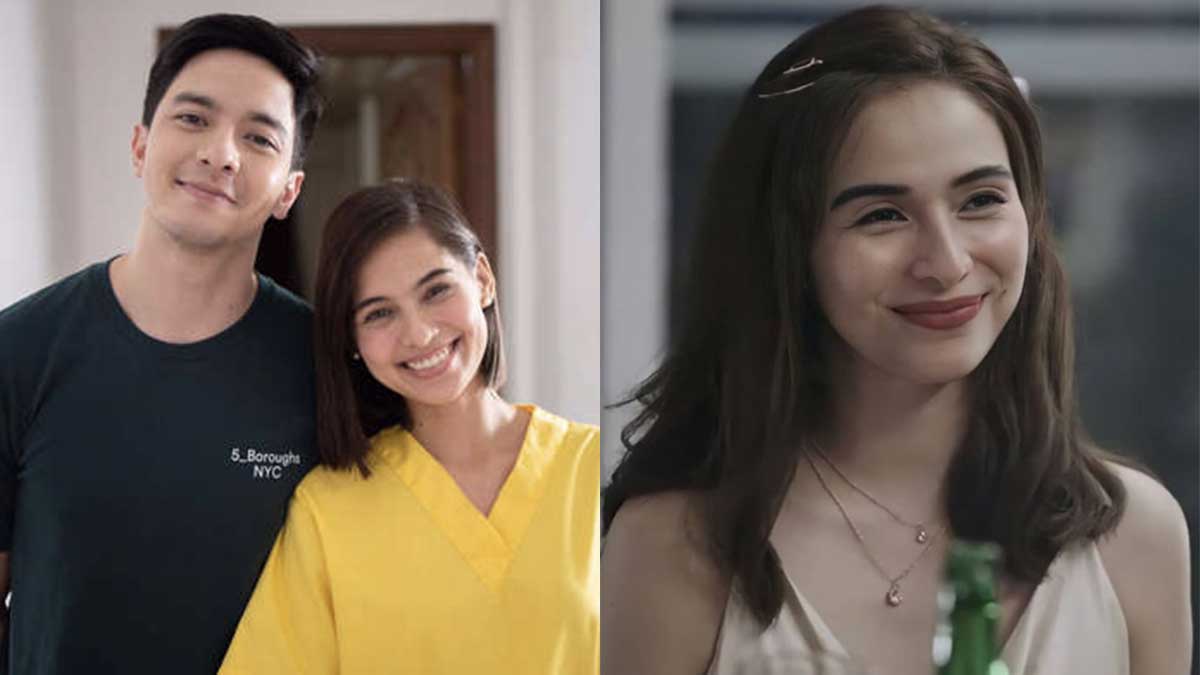 The team-up of Alden Richards and Jasmine Curtis Smith will headline GMA-7's upcoming series The World Between Us while Jennylyn Mercado is set to top-bill a teleserye called Love. Die. Repeat.
PHOTO/S: I Can See You (GMA-7)

GMA-7 has released an updated list of its new offerings and titles for the year 2021, and the total comes close to a hundred shows.

The list ranges from original prime-time and afternoon dramas, comedy and reality programs, including Asianovelas, to news and public affairs shows and those that will be aired on GMA-7’s sister channel, Gtv.

Also on the list are those that are already airing their teasers and will soon debut on television.

First on the list is the prime-time series Legal Wives top-billed by Dennis Trillo as Ishmael, a Maranaw Muslim royalty who has three wives portrayed by Alice Dixson, Bianca Umali, and Andrea Torres. Cherie Gil and StarStruck season 7 graduates Shayne Sava and Abdul Raman are also part of the cast.

“The Lookout,” the third installment of I Can See You, a prime-time anthology show currently airing its second season, will star Barbie Forteza, Paul Salas, and Christopher de Leon in the lead roles.

Heart Evangelista is set to start taping for her upcoming prime-time series I Left My Heart in Sorsogon, with new Kapuso actor Richard Yap and Paolo Contis.

The Kapuso network will try a new pairing between Julie Anne San Jose and David Licauco via the romantic-comedy series Heartful Café.

Rita Daniela and Ken Chan’s Ang Dalawang Ikaw, which tells the story of a man with dissociative identity disorder, was supposed to run its pilot episode on March 29, 2021, but it was moved to a latter date this year. The RitKen love team is joined by Kapuso newbie actress Anna Vicente.

GMA-7 has also announced the stars that will top-bill the new batch of Kapuso drama programs that will air later this year.

Alden Richards and Jasmine Curtis-Smith, whose chemistry was first tested in the first season of I Can See You, will finally be paired in a full-length drama series titled The World Between Us. They will be joined by Tom Rodriguez.

Jennylyn Mercado will play the lead in the upcoming drama series Love. Die. Repeat. It tells the story of a woman who is stuck reliving the day of her boyfriend's death over and over again.

Carla Abellana and Max Collins are set to work for the first time in the prime-time series To Have and To Hold, which tells the story of two women who will be caught up in a web of lies, betrayals, and affairs.

Rhian Ramos and Mark Herras, who used to be paired in GMA projects, such as I.T.A.L.Y. and Sine Novela: My Only Love, reunite in the legal drama series Artikulo 247 with Jackie Rice and Rocco Nacino. It tells the story of a woman who fights for justice and her chance for a new life against an antagonist who, on the other hand, tries to get away with murder twice by using legal means.

Also expected to air this year is GMA-7’s much-anticipated live-action adaptation of the hit Japanese anime series Voltes V: Legacy. It will be top-billed by Miguel Tanfelix as Steve Armstrong, Ysabel Ortega as Jamie Robinson, Radson Flores as Mark Gordon, Matt Lozano as Big Bert, Raphael Landicho as Little John along with Martin del Rosario as the Boazanian Prince Zardoz and Liezel Lopez as Zandra.

The other upcoming titles are The Witness, Maria Clara, The Love Connection, Little Princess, Raising Mamay, and Widow’s Web. The cast of each show is yet to be announced.

GMA-7 is also set to treat its viewers to more soaps and anthologies like GMA Inspire, Hope Delivers, Zoom-serye, Quarantitas, #Like4Like, The Fake Life, Ilaw, The Kitchen Prince, Born For Love, Two Hearts, Heart of an Angel, Sanggang Dikit, Love From Beyond, Frozen Love, Only Me and You, #Familygoals, Isang Libo't Isang Gabi (1001 Arabian Nights), Someone Like You, This Is Your Moment, I Do, Mechanical Heart, Hello Ghost, You and Me, The Assistant, Alab, Kung Maibabalik Ko Lang, Senioritas (Senior Girls), Mary Puppets, Dakila, and Moomoos Girls.

­GMA-7’s Public Affairs department has successfully crossed over the drama production department as it continues to offer more titles this 2021.

One of its offerings is Lolong, which is dubbed the “biggest action-adventure series to date." Inspired by the world’s largest crocodile, the series will be top-billed by Ruru Madrid with Shaira Diaz and Arra San Agustin as his leading ladies.

Its lifestyle-travel program Road Trip, which first aired in 2017, is also set to make a comeback this year with a new format.

These include the comedy shows Pa-Cute Ang Ina Ko and The Untold Story of Philip Tampipi.

GMA-7 also continues to produce reality-singing competitions with Sing For Hearts and the fourth season of The Clash.

Other titles under the weekend block of GMA are Studio Juan, One Knife Only, Grad Waiting, Sa Gillage, and Supermom.

GMA-7 also continues to grow its second free-to-air channel Gtv with its line-up of offerings.

Sitcoms that will make their way on Gtv are Ate Girls, Hapi and Gee, and Basketboys.

Other titles that will air on Gtv are Jowa Sessions, Boarding House, The Write One, Dreamland Hotel, and Sana All.

GMA-7’s Heart of Asia block brings the critically acclaimed Korean drama The Penthouse, which will soon air on GMA Telebabad.

Set around the luxury Penthouse Apartment with 100 floors, The Penthouse tells the story of wealthy families who have grand ambitions and desires for their children and would do anything for them.

Also included in the Heart of Asia line-up are Doctor John, Bad Genius The Series, The Gifted, The Sand Princess, and My Husband in Law.